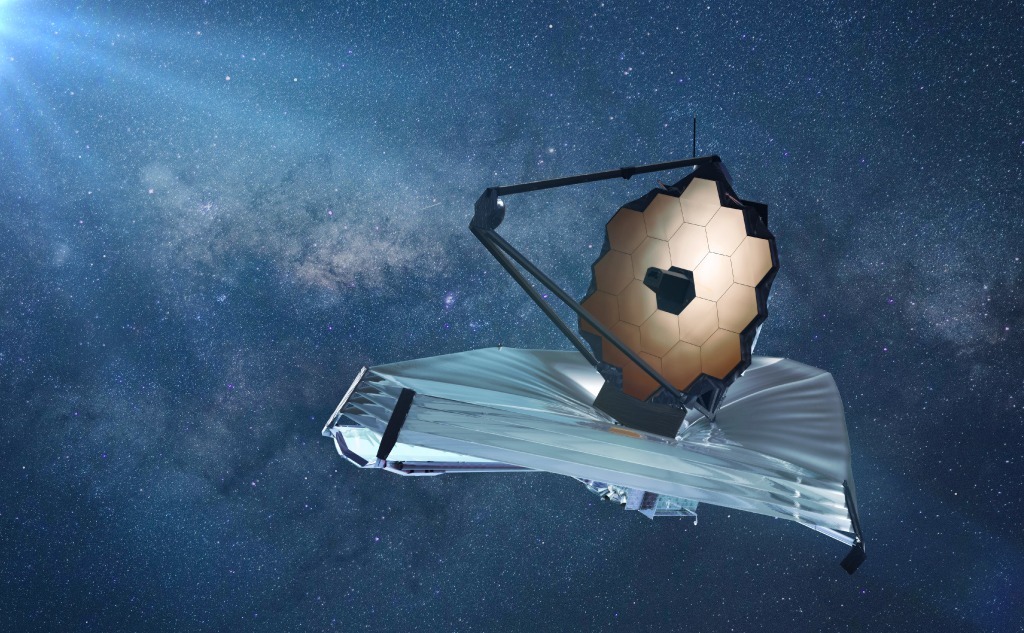 These are 10 fascinating facts about the James Webb Space Telescope.

From the size of a tennis court to a gold golf ball.

So if you want to learn the top 10 James Webb Space Telescope facts, then you’re in the right place.

Launched in October 2018, the James Webb Space Telescope took over Hubble as mankind’s next-generation eyes into the universe.

#1 The Biggest Space Telescope in History

Launching in 1990, Hubble Space Telescope was the largest space telescope in history.

However, James Webb Space Telescope (JWST) took over this record in 2018. At the size of a typical school bus, Hubble will be dwarfed by JWST’s tennis court size.

JWST will observe some of the universe’s most distant objects.

As a result, in its more than 13-billion-mile journey, object’s light becomes heavily shifted toward the red side of the electromagnetic spectrum.

Ultimately, this allows JWST’s mirrors to be 98% reflective, compared to the typical 85% reflectiveness of standard mirrors.

Fun fact: Gold layers plating the scope’s mirrors are only 1,000 atoms thick. Indeed, only a golf-ball-sized amount of gold was used to coat the entire 21-foot-wide mirror.

#3 Unlike Hubble, JWST Will Not Be Serviceable During Its Mission

In order to either upgrade or repair Hubble throughout its nearly 20-year stint, several manned missions visited the telescope in space to carry out operations.

However, Hubble orbits Earth at a measly 340 miles away. In comparison, JWST will orbit at just under 1 million miles out (940,000).

As a result, no missions are currently planned to perform any service or repair operations on the telescope.

Fun fact: JWST will be four times farther from Earth than our Moon!

#4 JWST Can Clearly See a Single Penny 24 Miles Away

Sharpness of vision, or angular resolution, is everything for space telescopes. And, JWST is no slouch in that department.

In fact, the telescope could clearly see a US penny from around 24 miles away.

Put another way, JWST could clearly resolve a football from around 340 miles away.

#5 JWST Will Be Able To Detect Water on Exoplanets

Today, we discover planets orbiting other stars by monitoring slight dips in the star’s light as the planets pass in front of them.

Furthermore, we can read unique signatures in the light, telling us a planet’s chemical composition.

Finally, the strongest and most readable signatures occur within the infrared spectrum.

Among its most important goals, JWST will see the light from the universe’s first stars and galaxies.

First of all, let’s think about that…

The FIRST LIGHT from the FIRST STARS that EVER existed in our universe!

That is truly amazing.

Ultimately, these are the stars that made it possible for Earth and us to even be here right now.

However, the farther away an object is, the faster it’s moving away from us.

Plus, the longer light has to travel, the more it gets stretched toward the infrared side of the spectrum. In astronomy, this is referred to as redshifting.

Hence, JWST’s powerful state-of-the-art infrared instruments. Even though previous telescopes have been seen further back in time, JWST will reveal previously invisible objects to humans.

JWST’s larger size makes the telescope a rather bulky payload to launch into space.

Therefore, during launch, JWST will be folded, like origami, allowing it to fit into its compact space.

Finally, once in space, the large telescope will unfold, expanding to its full size.

#8 One Side of the Telescope Is Hotter Than Death Valley, the Other Side Is Colder Than Antarctica

First, the side of JWST that will always face the Sun will constantly sit at a scorching 185º F.

In other words, one side of JWST will always be hotter than Death Valley.

However, the other side, containing the mirrors and instruments, will constantly sit at a frigid -388º F.

In other words, this side will always remain twice as cold as Antarctica.

Now, JWST observes light in the infrared spectrum. However, JWST itself emits infrared heat, which can interfere with precious data.

As a result, the high-tech instruments aboard JWST will operate at nearly absolute zero to decipher data accurately.

In fact, the space telescope’s primary operating temperature is only 50 degrees above absolute zero.

Launching in an Ariane 5 rocket, provided by Europe, JWST will blast off from a European Spaceport near French Guiana in South America.

Plus, this launch location happens to be very close to the Earth’s equator.

Simply put, the Earth spins considerably faster toward the equator.

Ultimately, this increased spin will provide an additional, fuel-free boost for the Ariane 5 rocket carrying the telescope.

The world’s most reliable launch rocket and a free booster, not bad.