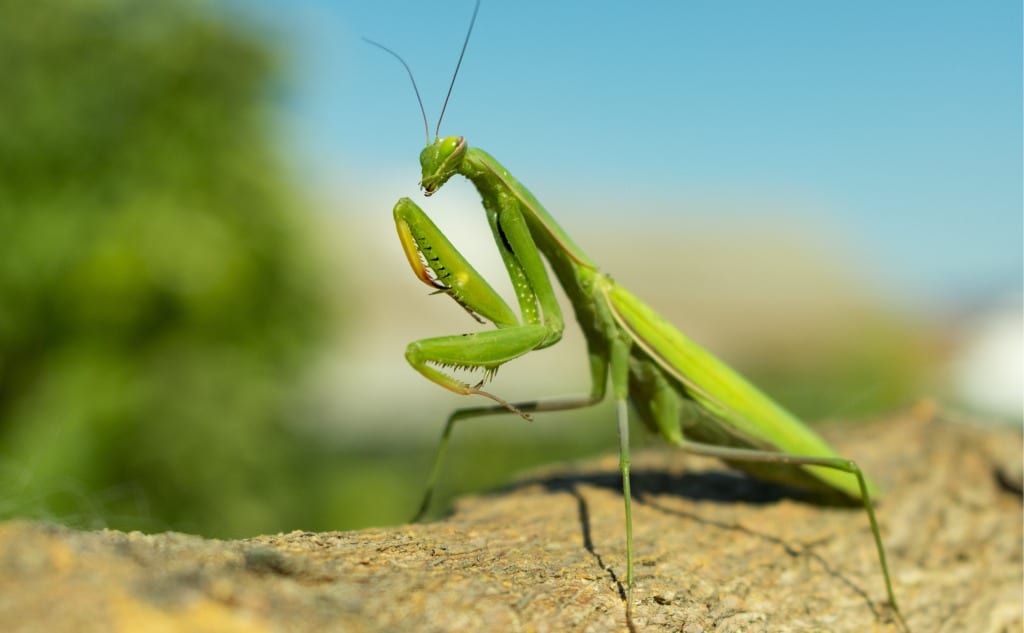 Here’s whether insects with 4 legs exist:

According to the biological definition, insects have 3 pairs of legs or 6 legs in total.

There are, however, insects and other arthropods that have modified their legs for other purposes, such as predation, burrowing, jumping, and sensing.

They appear to have 4 legs, but in reality, they have 6.

So if you want to know all about insects with 4 legs, then this article is for you.

Are There Any Insects With 4 Legs?

To be called an “insect,” a living creature, should have five basic characteristics:

Some insects have modified their legs for purposes other than those normally associated with a leg.

Generally, an insect leg is a jointed appendage that allows it to walk, crawl, or support itself while standing.

Yet, as you will see below, some insects have modified their legs to perform other functions, so you may not recognize them as legs at first glance.

For example, the mantis uses 2 legs only for hunting and the grasshopper 2 legs only to jump. They appear to have 4 legs.

One has to ask whether the alienated legs are still legs in the sense of a leg. But this is another discussion.

How Many Legs Have Insects per Definition?

Insects have 3 pairs of legs and therefore 6 legs in total.

But there are insects and other arthropods which have modified their front or hind legs for other purposes and appear to have 4 legs such as:

This is a great demonstration of adaptation and evolution.

A number of insects seem to have eight legs. However, those 8 legged insects are not insects, but appear to be insects to a layman.

9 Insects That Appear to Have 4 Legs

Here are some examples of the 4-legged insects:

Mantises are an order of insects that have forelegs modified for hunting, also called raptorial legs.

They wait for their prey and then catch and hold their prey with the help of these spiked, long, modified legs.

In the condition of a direct predatory threat, the mantises raise their raptorial legs along with wings, which can be perceived as a greater threat by their enemy.

There are over 2400 species in this order, including:

Stenolemoides arizonensis, a type of assassin bug, is also an insect that has modified forelegs.

Its front legs are adapted to hold the prey to suck out the insides of its prey.

This bug stands and walks on four legs, which qualifies it to be on our list.

These special butterflies, also known as four-footed butterflies, belong to the largest family of the Nymphalidae family.

They appear with four legs because the front legs are so small that they cannot be detected.

These tiny front structures are used for smelling by a butterfly. Examples include the glass wing butterfly and the Buckeye-butterfly.

Locusts, along with other types of grasshoppers, are included in the family Acrididae of insects.

In this case, the hind legs of the grasshoppers are used for jumping only. They stand and walk only on two front pairs of legs.

Moreover, the hind legs differ in anatomy and position as well. That is why the “Holy Bible” claims that the locusts and grasshoppers are four-legged insects.

Aquarius remiges, also called water striders or water skippers can walk on the surface of the water.

Two pairs of hind legs are used to walk and run on the water surface, while the front legs are modified for prey capture.

Giant water bugs belong to the family Belostomatidae of insects.

They live in water and use only two pairs of hind legs for swimming.

The front legs are modified again for capturing and holding their prey. They often leave the water and fly about.

They are exclusive predators and eat small fishes, crustaceans, and other insects.

This great group belongs to the genus Magicicada of insects and contains 7 species.

Wrongly included in locusts, these insects are actually bugs. They spend about 99% of their life in an immature state called nymphs.

During that nymph stage, they have four functional legs, and the front pair is used for burrowing and piercing into the roots of plants from where they drink the sap.

They emerge as winged adults by digging out using their front legs near the end of their life and die soon after mating.

This is a member of the genus of flies that have swollen raptorial forelegs.

They use the front pair of the legs to signal, recognize, and express different behavior.

They don’t use them for walking, crawling, or supporting the trunk of the body. So they use only 4 legs as actual legs.

Mites belong to arachnids which usually have 4 pairs (8 legs).

But this group of mites belongs to the superfamily Eriophyoidea which includes 7 species.

The mature instars, or larval stage, of four-legged mites, have two pairs of legs in the front of the body and don’t have any other legs.

They are of tiny size are parasites of garlic plants.