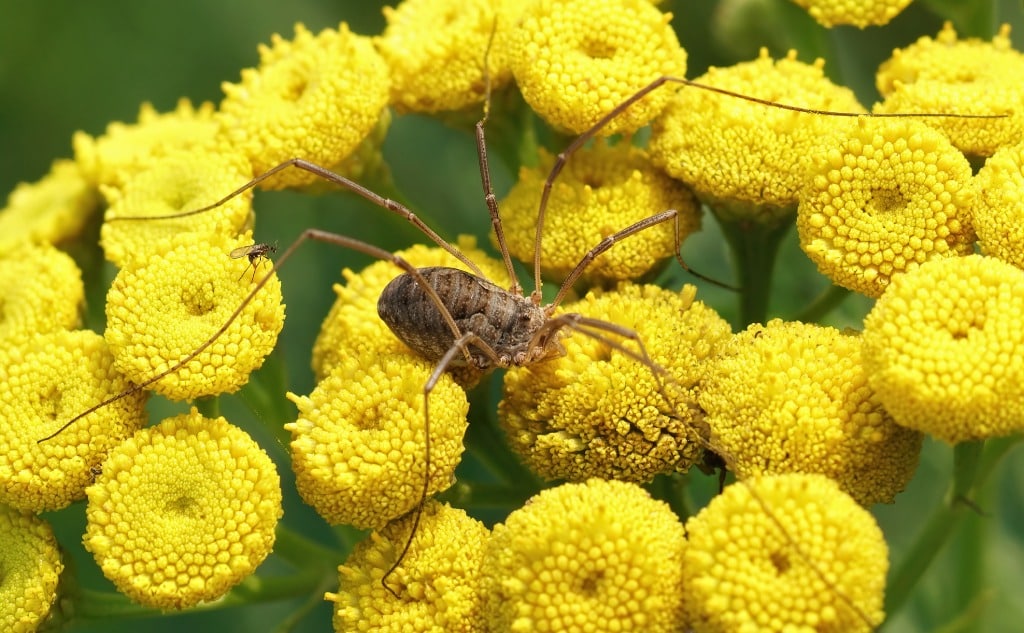 Here’s whether insects with 8 legs exist:

There are no insects with 8 legs.

By definition, insects have six legs.

There are insect-like creatures with 4 pairs of legs and therefore 8 legs in total.

Arthropods with eight legs are called arachnids of the class Arachnida.

If you want to learn all about insect-like arthropods with 8 legs, then this article is for you.

Do Insects With 8 Legs Exist?

Have you ever looked at a spider web clinging on a building corner and the 8 legged spider lurking and wondered if an insect could have 8 legs?

Well, biologically, that is not possible since insects technically must have 3 pairs of legs, so 6 legs in total.

Even so, there are insects that appear to have 2 pairs of legs and, so, 4 legs, but actually have six legs as well.

Yet, there are insect-like creatures with 4 pairs of legs and therefore 8 legs in total.

Are they not insects, too?

What are they then?

Here’s the answer: These 8 legged arthropods are called arachnids of the class Arachnida. They are not insects.

What Are the Characteristics of Arachnids?

The arachnids have the following characteristics:

A layman might mistake them for an insect, but they are not insects.

Here are 10 examples of arachnids with 8 legs that can be mistaken for insects:

The largest order of class Arachnida is these 8-legged silk pinners, containing over 49,000 species, some of which build webs to ensnare their prey.

They are found all around the world except Antarctica.

They don’t move their legs by the muscular activity of extensors that exists in other arthropods; rather, they use hydraulic pressure to move legs.

This is why if the spider has punctured the cephalothorax, it will be unable to extend its legs.

On the other hand, jumping spiders can jump up 50 times their size by suddenly increasing the pressure in their legs.

They are active predators (carnivores) except Bagheera kiplingi, a vegetarian jumping spider.

They use their legs to mimic catch and hold their prey.

They keep at least four legs on the ground while walking or running.

Examples other than jumping spiders include:

These 8-legged arachnids are thought to be dangerous to humans.

They are characterized by their legs, large pedipalps on the anterior end, and a long, thin, segmented abdomen with a stinger at the tip.

They use their legs to walk, run, and dance before mating.

Then, they give birth to their young, and the female carries them on its body until a hard exoskeleton develops.

Scorpions have poor vision but a strong sense of smell.

These blood-sucking arachnids are very clever.

They detect their host by olfactory stimuli and move in to attach to its body.

They find an appropriate place, cut through the epidermis of the skin, and drink its blood.

They need blood to convert from one stage to the next of their life cycle.

Their saliva contains 1500-3000 proteins, some of which prevent the detection by the host for a long period allowing the tick to drink blood for days.

They can drink blood 200-600 times of their own body weight and become engorged with blood.

They also transmit diseases such as Crimean-Congo hemorrhagic fever or Lyme disease in humans and tick fever in animals.

Tick is categorized as either Example include hard ticks and soft ticks.

These tiny arachnids are multidimensional. They are free-living, decomposers, parasites, and active predators.

With a size of less than 1 mm (the width of a dime), they may easily be ignored while present on animals, plants, in water, and on surfaces.

Mites have 4 pairs of legs; each leg is made up of 6 segments and is sometimes modified for swimming. Examples include:

Harvestmen are a great group of class Arachnida characterized by long legs often confused with spiders, but they are different.

As in all arachnids, their body comprises two segments, but segments are fused and appear as a single segment externally.

Despite having a pair of eyes in the middle of the cephalothorax, they use the second pair of their long legs like antennae to sense the environment.

With over 1000 known species, this group of arachnids is also called camel spiders or wind scorpions.

However, they have nothing to do with spiders or scorpions.

They appear to have 10 legs (5 pairs), but only 4 pairs are considered true legs, each consisting of 7 segments.

The anterior pair is actually pedipalps and is used as a sensory organ and the first pair of true legs.

Confusion was due to leg length.

The pedipalps do not rest on the ground while walking or standing. Rather they are kept raised to sense the environment.

They also have a sticky structure at the end to capture the prey. The leg length in solifuges varies greatly and often causes confusion.

These tiny creatures resemble scorpions but are actually beneficial to humans because they prey upon harmful arthropods like clothing moths, carpet beetles, ants, and other pests.

Pseudoscorpions are 8-legged and have large, strong pedipalps resembling scorpions.

This is why they are called pseudoscorpions (false scorpions). House scorpions are a good example.

Belonging to family Ricinulei of arachnids, these creatures are characterized by a hood over the head that can be raised and lowered.

They have 8 legs and pedipalps specially designed to manipulate the food.

Like harvestmen, the first pair of the true legs is the longest and is used for sensory purposes.

A good example is Cryptocellus goodnighti which lives in Costa Rica.

Their distinguishing features include no venomous fangs and no silk glands (the most important spider’s feature).

They also differ from whip scorpions because of their characteristically blunt tail.

In addition, they have raptorial pedipalps as in mantises, 8 eyes, and 8 legs.

They don’t use their first pair of legs for walking or running but as sensory structures. A good example is Heterophrynus.

They have whip-like tails and release a vinegar-like liquid when disturbed.

This is why some people call them vinegaroons.