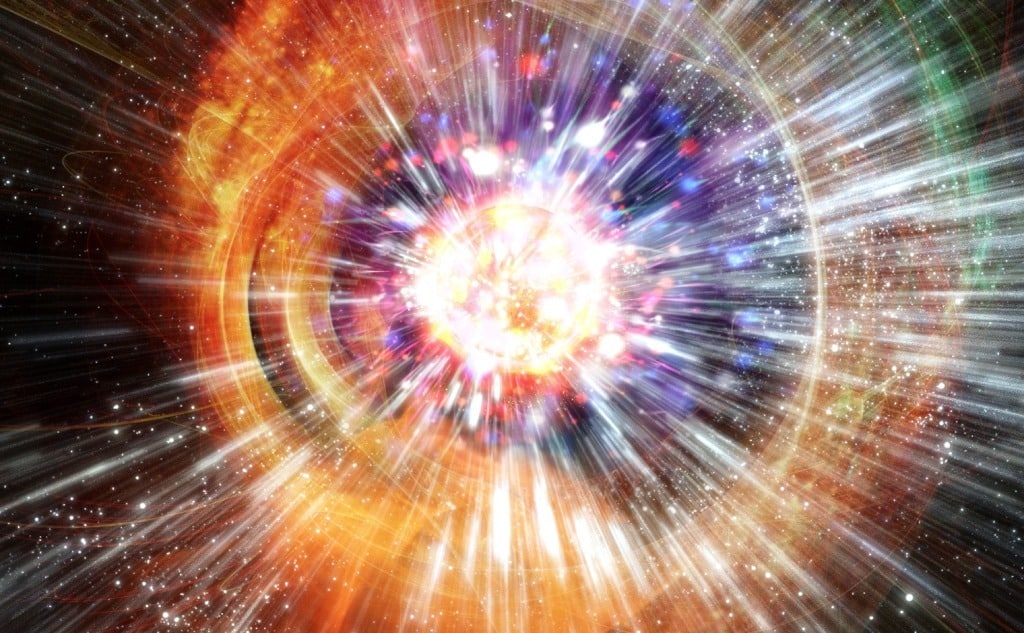 You probably don’t know these facts.

Learn why the name big bang was an accident and why Einstein wasn’t a fan at first.

Typically, we picture the big bang as a sudden explosion, giving birth to an entire universe.

And, rightfully so, given its world-renown name.

However, the big “bang” was not believed to be an actual “bang” at all.

Rather, a moment in time in which everything appeared from nothing.

Therefore, a more accurate title may be the “big emergence?”

Originally, upon learning of the newly-formed theory of an expanding universe, Hoyle showed his contempt and disbelief by jokingly labeling it the “Big Bang Theory.”

Ultimately, the title caught on.

#3 Where Did the Big Bang happen?

After all, we do see objects occurring at specific places and times in space.

However, the big bang happened everywhere all at once. Indeed, this is tough to wrap a human mind around.

But, often, science compares this concept to a balloon being inflated.

Equally, the universe expanded in every direction at once. Therefore, it is impossible to draw a line formally tracing back to a definite point in space.

Another unfathomable concept regarding the universe is that it came from nothing.

In physics, a singularity is an infinitely small space.

Furthermore, within this small space exists infinite gravity and density.

In fact, gravity within a singularity is so great that even light is unable to escape. As a result, pure darkness ensues.

Actually, black holes are also believed to contain a singularity.

Therefore, many current theories believe our universe is inside of a black hole.

Not to mention, some theories even provide a fairly concrete mathematical proof of such concepts.

#6 The Hottest Time in History

Occurring within a singularity, the big bang was the ultimate extreme. Simply put, the entire universe was jammed into an infinitely small space. In turn, this gave way to infinite temperatures—literally, temperature in which no numeric value can describe.

In fact, the same can be said for density, pressure, and most other universal measurements.

#7 When did the big bang happen?

Currently, science dates the big bang at slightly over 13.7 billion years ago.

First of all, it’s impossible to trace back to a single place where the big bang occurred because the universe has no center or edge.

Instead, every piece of the universe is constantly expanding, even today.

However, scientifically rewinding time does reveal when everything would have been crammed together in a singularity.

#8 Life before the big bang

Indeed, science and astronomy consider the big bang the start and creation of everything.

However, without light, humans are unable to observe this moment. Therefore, even many astronomers acknowledge that there may have been more that happened before the big bang.

Whether we will ever see or know this remains unknown.

#9 You Can Watch the Real Big Bang on TV (No, Not the Sitcom)

Blanketing the sky, the Cosmic Microwave Background Radiation (CMB) is the actual leftover radiation from the big bang.

As the universe’s first radiation occurred 380,000 years after the big bang, its thermal proof remained frozen in time.

No matter which direction you observe, our human limits reach this wall of energy. Because of this, when analog TVs (using antennae) flicker with static, a smaller percentage is due to the CMB.

However, only around 1% is from the big bang.

In 1927, Belgian priest Georges Lemaître proposed the idea that our universe could be expanding.

And, this concept also meant that the universe could have been dramatically smaller in the past.

Lemaître wrote to Einstein, sharing the exciting information. In his reply, Einstein remarked, “your calculations are correct, but your physics is abominable!”