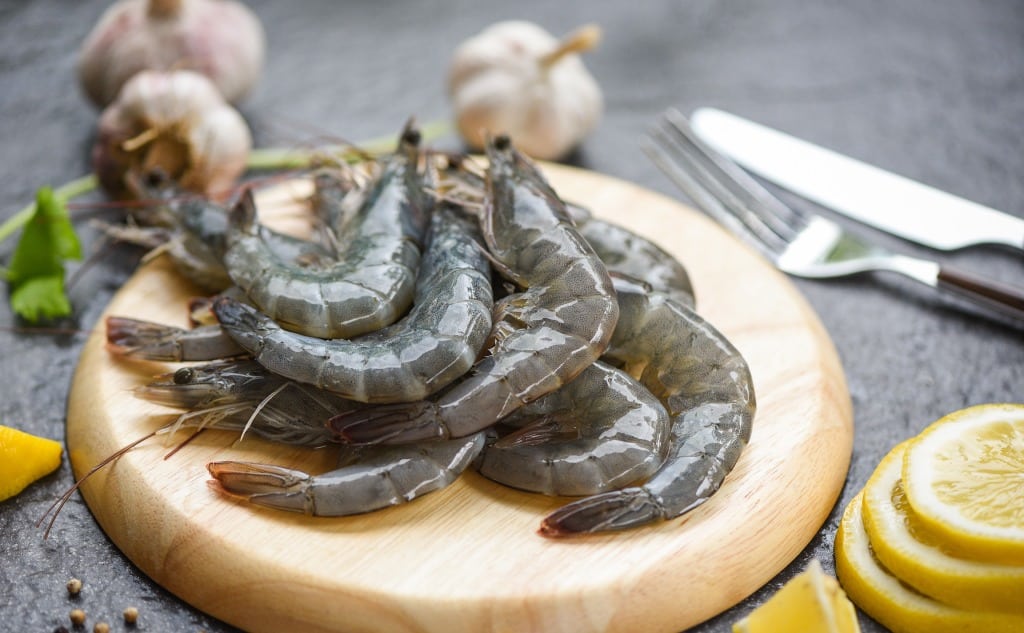 Here’s what the black lines in a shrimp are:

The black lines in shrimps are part of the animal’s digestive system. They are also known as “sand veins,” which look like thin black ribbons.

The shrimp’s sand veins can be completely or partially filled with things it ate. So those black lines are, in fact, bowels filled with feces.

So if you want to learn all about the black lines in a shrimp, then this article is for you.

What Are the Black Lines in Shrimps?

Many people believe that the black lines in a shrimp are veins, but actually they are a part of the animal’s digestive system. The black lines, which look like ribbons, are also called “sand veins.”

Sand veins can be fully or partially filled with things the shrimp has eaten.

Some people are disgusted to discover that the black lines are indeed bowels filled with feces. That’s why knowledge is power.

It’s also why good hygienic and culinary practice is to get rid of the sand veins before eating or serving the shrimp.

What Would Happen if You Eat a Shrimp That Wasn’t Deveined?

“Deveining” shrimp is taking those black, feces-filled lines out.

The probability is very low that you would get sick from eating shrimp that their sand veins left in them.

The probability is high, however, that the sand veins give the shrimp a gritty texture in your mouth—which is particularly gross when you remember where the grit comes from.

A shrimp’s digestive system is filled with bacteria that can potentially harm humans. But in a shrimp that has been properly cooked, the bacteria inside the sand veins will be sterilized by the heat.

You can devein the shrimp yourself, or you can buy them already cleaned. However you go about it, the best practice is to not eat the bowels of any animal.

Should You Take the Veins Out of a Shrimp Before Cooking?

Shrimp are one of the most popular types of seafood because of their tenderness and tastiness, but preparing them can be a demanding job. It’s not just the shell of a shrimp that needs to be taken out, but also its digestive parts—the so-called “sand veins.”

You should devein large shrimp with clearly visible veins. It’s not that they will do your health any harm, but just that you don’t want shrimp with a muddy taste.

So, you may be wondering why we only need to devein large shrimp. The answer to that is that it’s because the small shrimp don’t even have such veins, so there’s nothing to take out in the first place.

What Types of Sand Veins Do Shrimp Have?

Each shrimp has two types of sand veins—a black one and a white one. The black vein, which is the intestinal tract, is on the top of the animal’s body. The vein is colored black because it’s filled with feces.

The white vein is on the underside of the shrimp. It’s quite tiny.

The white vein is the actual blood vessel, and it’s white because shrimp have clear blood. Even if you decide to devein shrimp before cooking them, you do not need to take the bottom vein out because it doesn’t negatively affect anything.

Do Shrimp Have Real Veins?

No, shrimp don’t have veins. What they have are arteries and a heart that make a simple circulatory systems.

A shrimp’s circulation is of an open type. That means that the lymph and the blood are combined as they flow throughout the body. The mixture is called “hemolymph” (part blood, part lymph).

The hearts of shrimp have a single chamber with three openings in the wall. These opening allow blood to enter the heart. In other parts of the body, they also have smaller accessory hearts that help the hemolymph circulate.

What Is the Digestive System of Shrimp Made Of?

The digestive system of shrimp consists of the alimentary canal and the digestive gland, also called a “hepatopancreas.”

The hepatopancreas is a mixture of a pancreas and a liver, and its purpose is to produce enzymes and other compounds that help break down food. For example, we humans have both a liver and a pancreas as part of our digestive systems, but they are not connected and are located in different areas of the system.

The alimentary part of shrimp stretches from its mouth to its rectum as one continuous canal. There are three parts of it:

Shrimp are omnivorous animals. They mainly feed on moss, algae, and other weeds found in water. Occasionally, shrimp consume small aquatic animals such as tiny fish, snails, tadpoles (larvae of amphibians such as toads, frogs, or salamanders). They also feed on debris they find on the floor of the water system in which they live.

Shrimp are nocturnal. They capture their food with their legs, which are also arms, and shovel the food inside their mouths.

Can You Get Sick From Eating a Shrimp With Veins?

The chances of getting sick by a deveined or non-deveined shrimp are pretty much the same. The cause for sickness would be the shrimp being undercooked and would apply regardless of the state of its sand vein.

Shrimp that weren’t refrigerated or shrimp that are past their sell-by date can have significantly more pathogenic microorganisms in them.

Food poisoning is a frequent occurrence, even in the modern world where all food-producing establishments are required by law to follow strict safety protocols.

How Many People Get Food Poisoning From Eating Shrimp?

The likelihood of getting food poisoning from shrimp depends mostly on the state it was cooked in. Raw or undercooked shrimp can make you sick.

Millions of people get seafood poisoning every year. There aren’t precise statistics showing what percentage was due to shrimp.

Most cases of shrimp poisoning have a positive outcome once the symptoms subside.

The prognosis largely depends on the amount and the type of toxins and microorganisms the person has swallowed. With large quantities, the poisoning can severely damage the nervous system and possibly cause death.

How to Get the Black Lines Out of a Shrimp?

Taking out the black lines, called “sand veins,” from a shrimp probably isn’t something you are used to doing. Anyone can do it, though, even though it can be a bit tricky.

The first condition is to remove the legs and head from the shrimp. Then peel away its shell.

With the shell cut away, use a small, sharp knife to cut a line along the middle portion of the back. This way, you expose the dark vein. Once you’ve exposed it, simply pull the vein out.

If you aren’t handy with knives, you can use your fingers. Without cutting the back, pinch and pull the vein through the opening where the shrimp’s head had been.

Symptoms and Treatment of Shrimp Poisoning in Humans

The symptoms associated with shrimp poisoning in humans include:

Severe digestive infections can be manifested with blood in the stool. People that have shrimp poisoning quickly dehydrate and become feverish throughout the whole course of the illness.

There is no specific cure for shrimp or any other shellfish poisoning (shrimp are shellfish). Doctors prescribe drugs that control vomiting, stomach cramps, and diarrhea. Antibiotics don’t decrease the length of the illness.

While most cases of shrimp poisoning are mild, you should always seek medical treatment. Sometimes your body isn’t strong enough to fight on its own and needs extra intravenous fluids to put the toxins under control sooner.

Shrimp and Vitamin C Causes Death—True or a Myth?

Have you ever come across a message circulating on social media claiming that eating shrimp and vitamin C at the same time will kill you by arsenic poisoning?

The message explains how a woman suddenly died “with signs of bleeding from her ears, nose, mouth and eyes,” which the autopsy later showed was due to arsenic poisoning.

As it continues, the message claims the woman took vitamin C supplements every day. That in itself was never a problem, until one fateful night.

On that fateful night, she ordered a large portion of shrimp and prawns during dinner. Soon afterwards, she started having symptoms of food illness and eventually died.

None of her family members had any symptoms, yet all of them had the same meal. So, they reasoned, it must have been the combination of the vitamin C and the food.

This turned out to be a completely made-up story.

Arsenic poisoning happens when there’s a high level of arsenic in the bloodstream.

This element is naturally occurring. There are traces of it in the air, the water, and the food. It’s part of us.

The combination of healthy shrimp and vitamin C doesn’t increase the arsenic in the blood to the point of poisoning. It’s actually quite healthy. The only risk of poisoning is when the shrimp are contaminated.

Do People Eat the Shells of Shrimp?

It’s a common habit to take the shells of shrimp off before eating them. That’s what the vast majority of people prefer.

There are, however, individuals that like their shrimp with crunchy, hard exteriors. Crunchy or soft is solely personal preference.

The shells of shrimp are edible. They aren’t harmful at all.

Moreover, the shells can provide people with certain health benefits. A chemical called “chitosan” can be found in the shells.

Chitosan can help a person fight high cholesterol levels and obesity. Also, the compounds in the shells improve human joint health by strengthening the inner cartilage and protecting the long bones of the body.