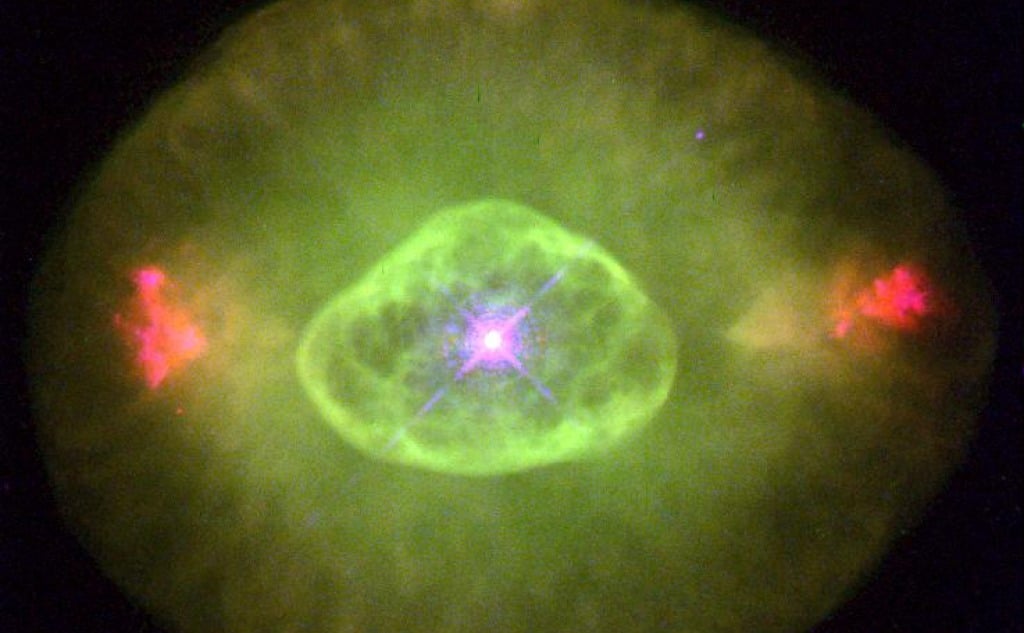 This is about the Blinking Eye Nebula NGC 6826.

So if you want to learn more about the Blinking Eye Nebula, then you’re in the right place.

What Is the Blinking Eye Nebula?

NGC 6826, the Blinking Eye Nebula, is a planetary nebula.

Contrary to what you may be thinking, this has nothing at all to do with a planet.

A planetary nebula happens when a star runs out of its nuclear fuel. As a result, it can no longer fight gravity and collapses in on itself. That causes it to shed its outer layers, and they float away from the star out into space.

As the name denotes, this often causes a sphere or ring shape of star matter, resembling a planet. That is what we see in NGC 6826, with the green outer sphere and the bright leftover star directly in the middle.

In fact, our own Sun, when it dies, will go through a similar process and create something magical looking. It takes a star much larger and more massive to more or less skip the planetary nebula step and violently explode in a supernova.

NGC 6826 is located approximately 2,000 light-years from Earth, in the constellation Cygnus, the swan.

The nebula is only around 0.2 light-years in diameter.

I say “only,” but this diameter still equates to more than 1.1 trillion miles, which is small in cosmic terms.

Ultimately, the beautiful colors and shapes will likely continue floating out for 10 thousand years.

Believe it or not, this is also short, compared to the billions of years or more than a star can live.

First, as you can see in the photo above, NGC 6826 is a large green cloud surrounding the remaining leftover star.

On each end are two bright red fliers.

Actually, you notice two green spheres. That is because the extremely hot leftover star in the center pushes out a scorching wind. This hot wind blows the former star’s matter away and leaves the noticeable empty bubble around itself.

As this green gas is pushed outward, it bumps into the gas that is farther out and reacts, hence the two green clouds.

Next are the beautiful red flares on both sides. These are called fliers (Fast Low-Ionization Emission Region).

Fliers are essentially sections of gas emissions, commonly seen in planetary nebulae that move much faster than the rest of the material.

In fact, they are moving at supersonic speeds. Scientists believe flier’s rapid speeds indicate that they are much younger than the rest of the nebula’s materials.