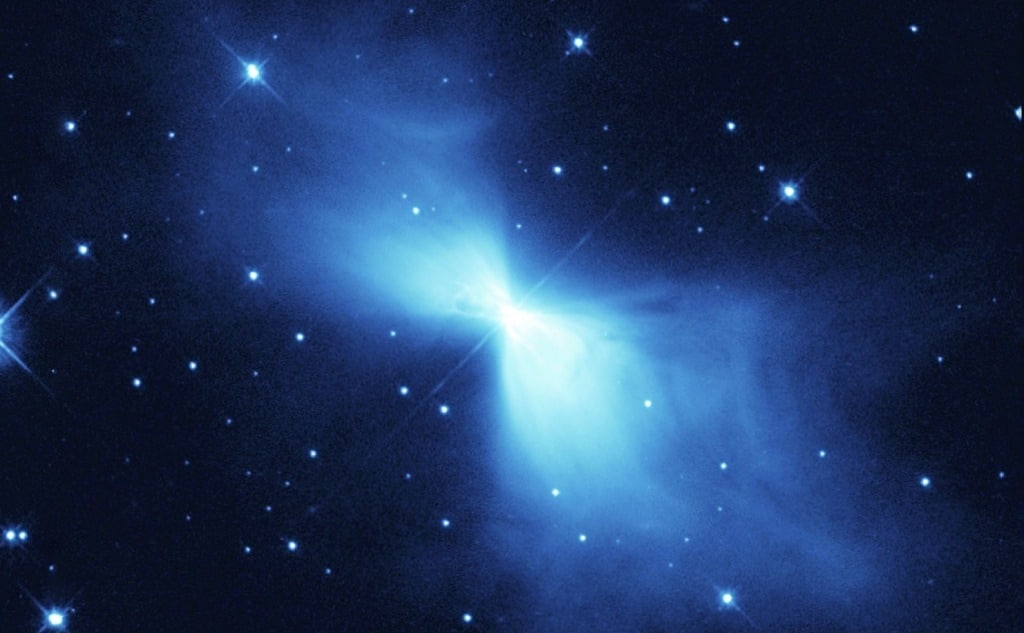 This is about the coldest place in the universe: the Boomerang Nebule.

The coldest place in our solar system is Uranus.

So if you want to learn more about the coldest place in the universe, you’re in the right place.

About the Coldest Place in the Universe

Certainly, we have some seriously chilly places on planet Earth.

Perhaps, even your own town gets unbearably cold during the winter months.

Actually, our planet’s record-holder was Antarctica, coming in at a frigid -129º F. But, Earth is one tiny dot in a vast universe.

So, where is the coldest place in the universe?

Unlike heat, which can keep increasing without any limits, cold has a stopping point.

Simply put, the colder temperatures get, the slower atoms move.

Boomerang Nebula Is the Coldest Place in the Universe

Yet, deep in the constellation Centaurus, the Boomerang Nebula holds the record for the coldest place in the known universe.

In fact, the frozen region is only one degree above absolute zero. That’s even colder than the frozen background leftover from the big bang or space itself.

Actually, the Boomerang Nebula was once a star, very similar to our Sun. But, nearing the end of its life, the star shed its outer layers. Having nothing to do with planets, we call this shedding a planetary nebula.

What Causes the Coldest Place in the Universe?

As the Boomerang’s central star dies, it blasts dust and gas outward. Now, as the nebula continues expanding, it cools itself.

In fact, the Boomerang Nebula is blowing material much faster than typical dying stars.

Plus, blown out in twin jets, gas gives this nebula more of a bow tie shape than a Boomerang.

Actually, you can do a simple experiment to see why the Boomerang Nebula is so cold:

Technically, both times, the air becomes heated inside your body. But, when puckering your mouth, exhaled air now becomes cooled.

In fact, the Boomerang Nebula exhibits these same very simple concepts. But, then, blasted through tiny openings, the star’s materials become cooled, same as your breath.

The Coldest Place in the Universe Takes on a New Shape

Formerly, Hubble photos of the “Boomerang” Nebula revealed more of a bow tie or hourglass shape. Ultimately, such shapes are typical with gases bursting from a star’s poles in twin jets.

Being a new, or young planetary nebula, the central star has only just begun.

In fact, later in its death, the star will blast hot ultraviolet radiation, illuminating the nebula in vivid colors.

Imagine the show this frozen nebula will put on 200 million years from now.