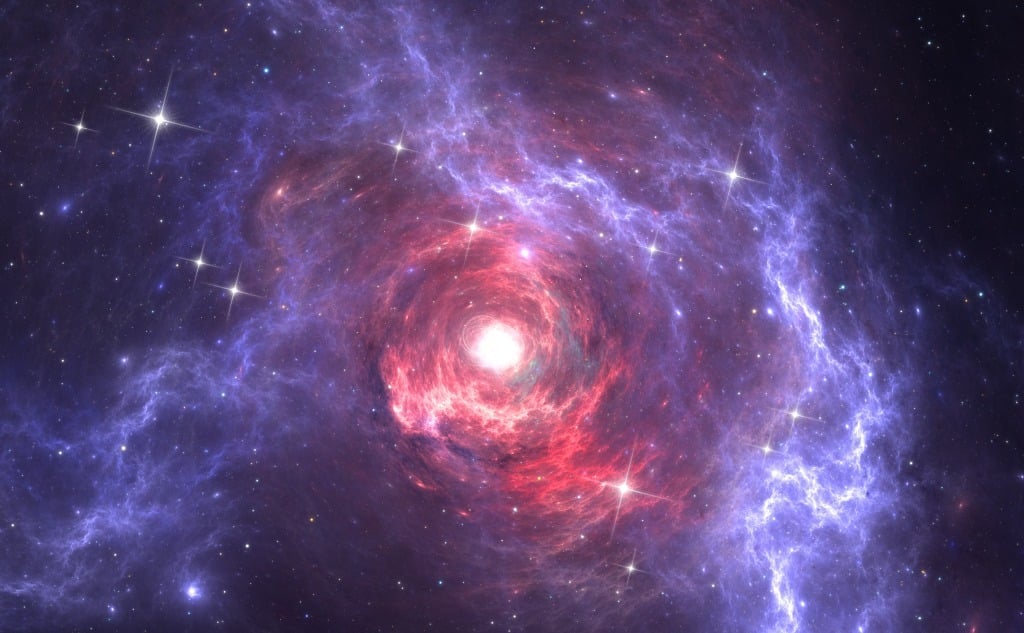 This is dark energy put simply.

Dark energy cause our universe to expand.

So if you want to easily understand dark energy, then you should read this.

Looking into the night sky, we see a Moon, planets, and stars with black space in between, right?

Actually, that “black” space is anything but empty.

In fact, it’s loaded with things we can’t even see, like dark energy.

So, what is that?

Well, let’s break it down and make dark energy simplified!

What Is Dark Energy?

Dark energy is an invisible force that causes our universe to expand at a constantly increasing rate.

In other words, dark energy is an unidentified repulsive (pushes away) force, acting against gravity.

How Was Dark Energy Discovered?

Edwin Hubble’s 1929 observations of distant supernovae first told us that the universe is expanding.

But, we knew that gravity eventually wins and would pull the universe back in. Therefore, the question we began asking was, “just how fast is the universe’s expansion slowing down?” However, reliable results would evade us for decades.

Later, in the 1990s, the universe’s deceleration again became the subject of observation. Now, advanced technology and knowledge would allow us to calculate a precise number.

Finally, shocking results showed that the universe is actually speeding up, not slowing down. And, these findings sent shockwaves throughout the astronomy and physics community.

How Is Dark Energy Detected?

Now, we know dark energy makes up 73% of the universe.

Furthermore, we know that it is invisible to our eyes and current technologies.

So, how do we detect invisible, untestable energy?

Much like dark matter, we must rely on observing dark energy’s effect on our surroundings.

Now, because we know the exact brightness for these explosions, they act like guide lights for astronomers.

Basically, knowing this brightness allows us to gauge their distance accurately.

And, knowing their distance allows us to see dark energy’s effect on the universe’s expansion. This is like a driver using headlights to tell the distance of an oncoming car.

Seeing dark energy’s effect on the universe only tells us so much.

Currently, nobody knows what it is made of or really any of its properties.

Yet, there are several theories currently swirling around:

This theory predicts a changing energy field called the “quintessence.”

In ancient Greece, the four essences were Earth, air, fire, and water.

Quintessence is the fifth essence.

Now, if you read above, you know that dark energy directly counteracts gravity.

Therefore, gravity could never be the cause of the universe expanding, right?

Well, perhaps we simply do not completely understand how gravity works.

After all, there are far fewer knowns than unknowns in the universe.

Over a century ago, Albert Einstein was the first person to realize that space is not simply empty.

In fact, he was also the first to understand that new space can come into existence.

In his Theory of General Relativity, Einstein included a “cosmological constant” calculation to account for our static, unchanging universe.

Obviously, this prediction was incorrect. Actually, Einstein referred to the constant as his “biggest blunder.”

Yet, one hundred years later, his cosmological constant is one of the most accurate models for dark energy.

As more space is created, more energy would be added to the universe.

Ultimately, this would accelerate the universe’s expansion.

Unfortunately, though we know the cosmological constant nicely fits dark energy, we still are uncertain why it fits.

Perhaps dark energy is an entirely new fundamental force in the universe.

Furthermore, some believe the new force could be temporary.

In other words, it may cause expansion for several billion years, ultimately slowing down and contracting in later eras.

The “Theory of Everything”

For decades, our understanding of the large and small have remained unlinked.

Classical physics explains everything from the planet’s motions to black holes.

Quantum theory explains the bazaar functions of the particles that make up atoms.

However, classical physics completely breaks down at small atomic levels. And, quantum mechanics do not apply past the micro size of atoms.

Ultimately, answers may reveal themselves upon connecting the large and small. Perhaps, among the unlocked secrets: dark energy.