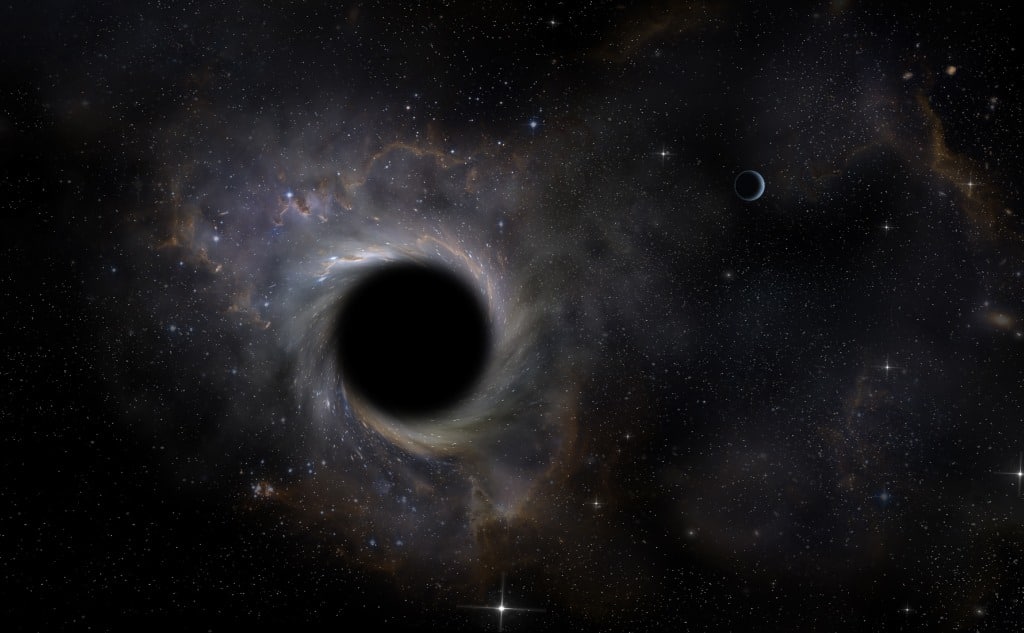 This is dark matter put simply.

Nobody currently knows what dark matter is.

If you want a simple explanation of dark matter, then you are in the right place.

So without further ado, let’s do this!

First of all, let’s make one thing clear: nobody knows what dark matter actually is.

As you will learn below, dark matter can not be directly seen visually.

However, we do have some information by observing dark matter’s effect on its surroundings.

So, let’s jump right in!

What Is Dark Matter?

First of all, nobody currently knows what dark matter is.

Also, since it is currently invisible to our eyes and tools, we do not yet know how to study dark matter.

However, by studying the things we can see, we know that dark matter is real and exists.

How Is Dark Matter Detected?

When we look out into space, we see stars, planets, galaxies, and more. And all of these objects are made of matter.

Plus, the matter making up all of these objects causes them to attract other matter through gravity.

Astronomers can very accurately measure and predict the results of gravity. For instance, we know where and how a planet will orbit. Or, we know how one star will attract another star.

Furthermore, astronomers can observe the orbits of stars in a galaxy and use this information to very accurately measure the amount of matter (mass) in the galaxy.

The speed of stars’ orbits directly affects the gravity from other matter in the galaxy.

Now, the problem is that when astronomers use any galaxy’s stars to precisely add up its total mass, something is missing.

Stars are moving much faster than they should be compared to the matter measured.

Basically, by observing the behavior of visible matter, we know some form of invisible matter must be present.

How Much Dark Matter Is Out There?

Baryonic matter (definition above) is everything we have ever seen and known in the universe. All stars, planets, galaxies, people, plants, pets, and everything else are baryonic matter.

Yet, astronomers have concluded that all baryonic matter accounts for 4.6% of the universe through detailed measurements.

Wait, let’s think about that.

Literally, everything ever seen or sensed throughout the existence of life only makes up 4% of the universe.

In other words, the dark sky you see at night is far from empty space.

What Is Dark Matter Made of?

Given that we have yet to see or directly observe dark matter, nobody knows what it’s made of.

However, multiple theories now swirl around as we scramble to unlock science’s biggest mystery.

Currently, a few of the leading theories are:

Presumably, WIMPs are much more massive than common particles, like protons.

Yet, these heavier particles would only interact with each other through mild weak forces, making them tough to detect.

As of now, WIMPs are, by far, the leading candidate for dark matter.

Neutrinos are tiny, almost massless particles. And, one neutrino could pass through our entire solar system and never bump into a single piece of matter.

However, scientists believe there is a neutrino counterpart, called a sterile neutrino. And, it’s even more elusive.

In fact, a sterile neutrino could travel for the entire age of our universe (14 billion years) without bumping into any other matter.

That would be like you walking blindfolded through New York City for an entire year without running into a single thing.

Though it sounds like a quaint Italian restaurant, the neutralino is actually an of particle.

Some theories believe each known particle has a “super” counterpart particle. The neutralino is one of these.

A long-standing sci-fi staple is an alternate universe.

Now, once again, they emerge in predictions about dark matter.

Some theories believe matter in entirely separate universes is the cause of dark matter.

This other-worldly matter is unable to interact with our universe’s matter yet still throws off measurements and calculations in our own world.

Sure, it’s bizarre. But, can you prove it wrong?

Now, another sci-fi standby appears as probably cause for dark matter, the fourth dimension.

This theory believes that if dark matter does not exist in a separate universe, it may exist in an unseen dimension of space.

Unfortunately, this theory’s wild nature leaves it currently not well-accepted.