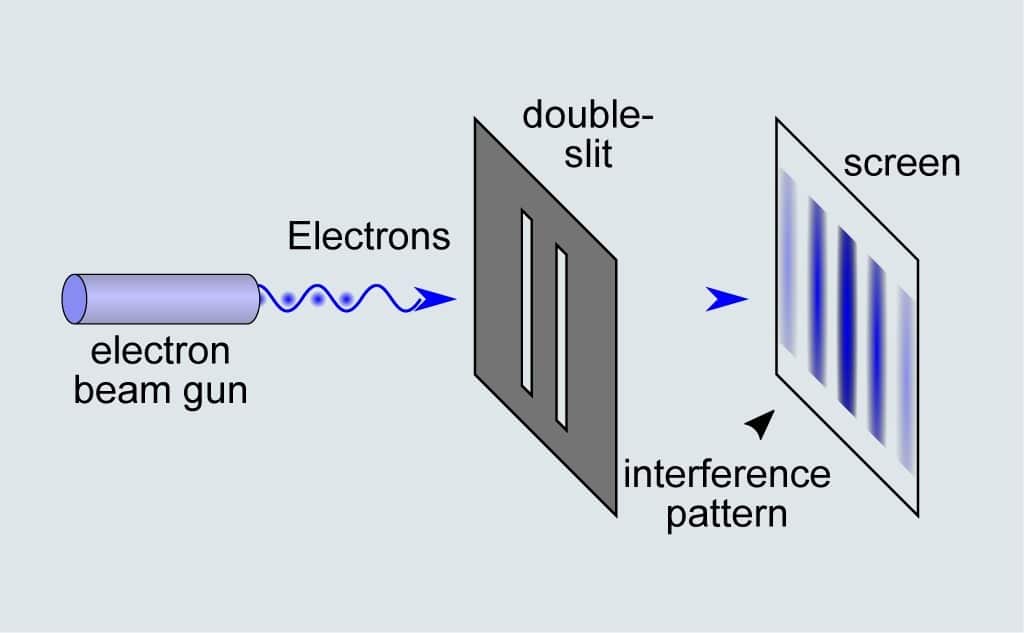 Here’s the 10 steps explanation of the Double Slit Experiment in simple terms:

With the Double Slit Experiment, you’ll discover that light has both a wave and a particle nature, and these are inseparable.

Rather than being just a wave or a particle, light has wave–particle duality.

Quantum particles and other electrons are the same.

So if you want to understand the Double Slit Experiment once and for all, then you’re in the right place.

This article deviates from the world we know altogether, but it is too amazing not to share.

We will look at one of science’s most fantastic and yet unexplained tests, the double-slit experiment.

This experiment, involving the behavior of light, dips into science’s most bazaar and least understood fields, called quantum mechanics.

And, most of, if not all of our classical physics goes out the window at these levels.

Various things or materials are shot directly at a barricade with two parallel slits cut out of it.

The material will pass through the slits and project on the wall behind the barricade.

Different results are achieved on the wall depending on the type of material that is fired at the barricade.

Let’s look at some well-tested results:

Particles, in this case, can be thought of as tiny pieces of matter, like small round pellets.

Some will be reflected if we shoot these particles at the barricade, and some will pass through the slits.

The matter passing through the slits will create a pattern of dot marks on the wall behind the barricade, like this:

Waves behave much differently than particles.

Waves are essentially ripples in some type of medium, like waves flowing through water, for instance.

So, if a stream of water is used in the experiment, a single water wave will hit the barricade.

Then, as some of the water waves pass through each slit, they are split into two separate waves.

As the two waves travel beyond the barricade, they start to overlap, creating what is known as an interference wave, shown below.

As the tops and bottoms of the two waves intersect, they leave a combination of lit-up and dark regions.

And, when these light and dark regions hit the back wall, they create a pattern of multiple stripes, like this:

Now, let’s shoot electrons, which are microscopic particles of matter.

We would expect that the electrons should yield results similar to the previously-tested particles mentioned above.

At first, they pass through the slits, creating a band of dots on the wall.

But, after shooting the electrons for a while, something bazaar starts happening.

Instead of two simple bands of dots behind the slits, several bands begin appearing.

The electrons are forming the same pattern as the wave!

Electrons are particles, so how could this be?

The electrons even left dots behind the solid parts- and around the outside of the barricade, where they could not possibly land.

Initially, they assumed that the individual electron particles must somehow bounce off each other, creating the wave-like pattern.

So, they fired individual electrons at much slower rates to avoid any possible interference.

Yet, nothing changed. Even single electrons still created a wave-like interference pattern.

The electron is left as a particle. The slits caused it to split up and interfere with itself like a wave.

Finally, it recombined with itself again to strike the back wall like a particle.

Baffled by the unexpected results, physicists then set up a measuring device to closely observe which slit the electron passes through.

The results left them even more shocked.

When measuring the path taken, the electron went back to behaving like a particle and simply left single bands behind the slits.

Somehow, the act of observing the electron caused it to behave differently.

It was as though the electron knew that it was being watched and changed its actions.

What does this mean?

Though the quantum world is still wildly misunderstood, there are general concepts that we can comprehend.

We now understand that elementary particles can exhibit behaviors of both a particle and wave-like entity most, if not all. This concept is known as wave-particle duality.

Over time, this concept was discovered by brilliant physicists like Max Planck, Albert Einstein, Louis de Broglie, and others.

We saw this wave-particle duality occur during the double-slit experiment.

The electron left traveling as a particle, then split up to interfere with itself like a wave, then recombined again to hit the wall like a particle.

This is where things get odd and difficult to wrap your mind around.

On this quantum scale, the electron is not traveling as a wave or a particle. It is simply traveling as a probability wave, a sort of cloud of different possibilities.

In other words, it is no longer accurate to ask the question, “where is the electron?” Instead, you would ask, “at any particular spot, how likely is it that the electron could be there?”

No doubt, this is strange, and it seems extremely vague. Yet, Austrian physicist Erwin Schrödinger developed a calculation to predict where the electrons will land, aptly titled Schrödinger’s Equation.

Speaking of Schrödinger, his notorious Schröderinger’s Cat Experiment is explained here, but in simple terms.

Essentially, we could never accurately predict where a single electron will hit the wall.

But, using Schrödinger’s Equation, we could find the electron’s probability wave.

And, finding this wave would allow us to quite accurately predict the probabilities of where electrons will hit the wall.

However, the truth is that these predictions have been tested time and time again, showing terrifically accurate results.

Now, we understand some very basic concepts of the quantum activities occurring in the double-slit experiment.

And, these concepts now also create some other spooky thoughts or implications: The electron’s journey.

Since we know that the electron was actually traveling as a mere wave of various possibilities, this has peculiar effects on how it traveled through the double-slit experiment.

The electron did not simply pass through one of the slits and strike the wall.

With all of the various probabilities that its wave contained, the electron basically took all possible paths.

So, when we tried to monitor and observe its journey, its wave of probabilities collapsed, and it became a reality. If that doesn’t warp your mind, I don’t know what will!

Where will you appear?

From these astounding quantum findings, you can start thinking of really mind-blowing stuff.

Your body is made of particles, right?

Now we understand that these particles act like waves of different possibilities at the quantum level.

So, what could that mean?

Essentially, there are now infinite possibilities of where you might appear.

Your computer may be sitting in your lap. Otherwise, it could be on Neptune.

Obviously, that sounds absurd. But it’s really not.

The probabilities of the matter that makes up your body and your computer could actually be calculated.

You could determine the probabilities of how likely you are to appear at any given place.

Clearly, that would be extremely tough, and you would most likely not want to do that.

Yet, there are technically very tiny probabilities that you or your computer could appear in a wild, distant location.

Though it is a much higher probability (or much more likely) that you will appear at your house, and your computer will appear in your lap.