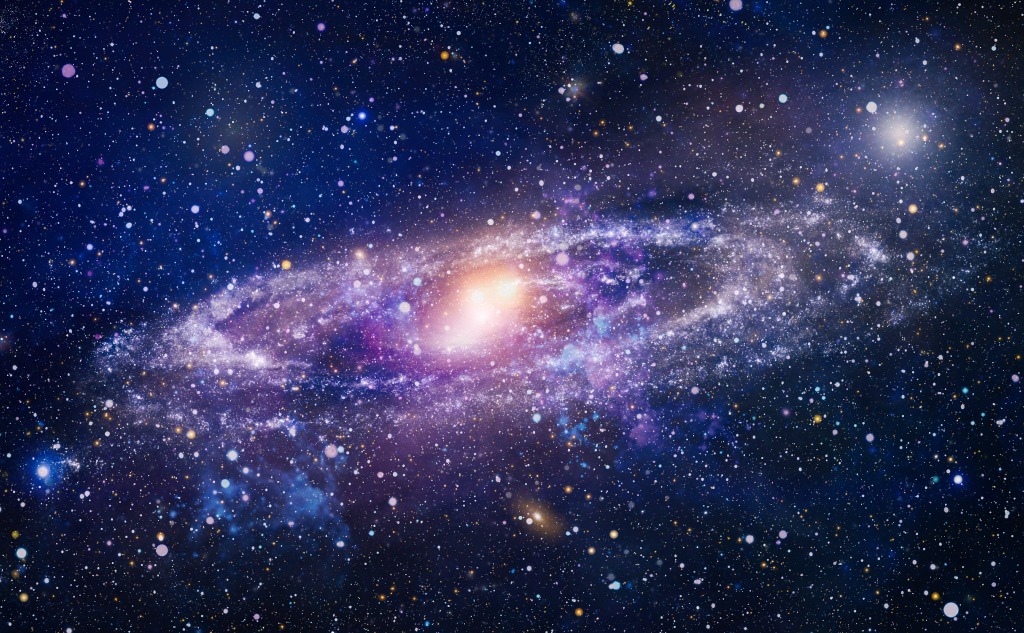 This is your mission 08 of the epochs of the Universe.

The Era of Galaxies is the Universe’s present stage.

So if you want to travel back in time and experience the Era of Galaxies from its beginnings to the present, then you’re in the right place.

Mission 08 of the Epochs of the Universe – Era of Galaxies

Finally, you are now on the last epoch, Mission 08, Era of Galaxies.

We have explored all the epochs step-by-step, and now we’ll look at the final epoch.

We have seen the Universe evolve from a tiny singularity to a massive universe filled with atoms in the previous epochs.

Now in this final epoch, we will see how the stars and galaxies form.

Let’s explore the Era of Galaxies and see how the Universe got to its present state.

This is the final epoch in the epochs of the Universe.

In this epoch, we will look at how the stars and galaxies formed from the atoms.

The Universe has grown from a tiny singularity during the Big Bang to a massive space filled with galaxies and other stellar bodies.

This being the final epoch, we will see how the present Universe came to be.

Has the Universe grown?

What era do we live in currently?

Do planets and other stellar bodies exist?

As we have seen in the previous epoch, the Universe is continuously expanding as time goes by.

The size of the Universe in this epoch is 93 billion light-years in diameter, and it is still expanding.

A light-year is a distance that light travels in one Earth year.

One light-year is equivalent to 6 trillion miles or 9 trillion kilometers.

As stated in the mission data, you can see that the Universe is growing older as it expands.

The Era of Galaxies happens between 1 billion years after the Big Bang and the present day.

As you read this article, the Era of Galaxies is continuing.

The galaxy formation process has not stopped.

Our Universe continues to evolve. Within this timeline, the force of gravity caused matter to draw together to form galaxies.

Before galaxies were formed, the Universe went through what is called the Dark Ages. This occurred after neutral atoms were formed until the first stars and galaxies reionize the intergalactic medium entirely.

Reionization is when the first stars and quasars gradually form and emit intense radiation that splits the neutral hydrogen atoms back into a plasma of protons and free electrons for the first time since recombination and photon decoupling.

A quasar is an active galactic object and the brightest object in the Universe.

To ionize the neutral hydrogen, an energy that corresponds to ultraviolet photons was required.

During reionization, matter spread out further due to the ongoing expansion of the Universe.

The atoms formed small lumps of matter (stars) which drew together due to the influence of gravity to form galaxies.

Photographs of such lumps have been taken by the Hubble Space Telescope. These lumps may be the ancestors of modern galaxies.

Due to gravitational attraction, galaxies gradually pull towards each other to form clusters and superclusters.

The Hubble Space Telescope has made observations that small galaxies merge to form bigger galaxies.

In this epoch, between 1 billion years after the Big Bang and the present day, the Universe’s temperature cooled down, allowing galaxies to form.

The temperature is between 60 Kelvins and 2.73 Kelvins.

The Era of Galaxies is the epoch we are currently living in. The current temperature of the Universe is 2.73 Kelvins.

The Universe’s density has been decreasing gradually since the Big Bang. Still, the force of gravity began to cause some irregularities in the gas in the Universe.

As the Universe continued to expand, gas pockets became denser, causing the stars to ignite. These stars grouped with each other to form galaxies.

Also, the cosmic microwave background (CMB) density in this epoch has changed compared to the Era of Atoms.

The difference in density in the CMB has created a path for the galaxy formation since density is directly proportional to pressure.

The pull of gravity draws matter together, which leads to stars, which form galaxies.

The stars from this era, known as Population II stars, are formed earlier in this process. The most recent Population I stars formed later.

Population I stars are stars that contain 2% to 3% of metals and are found in the disk of the galaxy.

Population II stars are stars with a poor metallicity of 0.1%. They are found in halos of spiral galaxies and in globular clusters.

What is Happening? Scientific Explanation

Here is the scientific explanation of what’s happening in the Era of Galaxies.

In this epoch, we see the formation of galaxies.

The gravitational force began causing anomalies in the gas in the Universe.

As the Universe continued to expand, the gas became denser, and stars began igniting. These stars pulled toward each other in groups and formed galaxies.

Also, the density of the cosmic microwave background (CMB) played a role in the formation of galaxies. The difference in density in the CMB has created a path for the stars to form and ignite.

Before the formation of galaxies, there is a period called the Dark Ages. This period is between after neutral atoms have formed until first stars and galaxies reionize the intergalactic medium completely.

Reionization is described as when the quasars and first stars form. They start emitting intense radiation that splits the neutral hydrogen atom into free electrons and protons for the first time.

The Universe is continuously expanding and increasing in size. In this epoch, the size of the Universe is 93 billion light-years in diameter and continues to expand in the present day.

It is quite difficult for the human mind to understand how a tiny single point has expanded to the present Universe.

The Universe has looked the same as it does now, for many billions of years.

The Era of Galaxies occurs after the formation of atoms in the Era of Atoms. The timeline of this epoch is between 1 billion years after the Big Bang and the present day.

During this long period, galaxies form, and gravity pulls them towards each other to form clusters and superclusters.

Currently, we live in the Era of Galaxies, and new galaxies are forming even in the present day.

In summary, in the Era of Galaxies, the formation of galaxies occurs as the Universe continuously expands.

After the Dark Ages, the period between the formation of neutral atoms and first-time galaxies and stars reionize the intergalactic medium.

Reionization is when the first stars and quasars form. They begin to emit intense radiation that splits up the neutral hydrogen atom into free electrons and protons. Later, reionization ends, and the hydrogen atom forms again.

Matter (stars) draws together due to the pull of gravity to form galaxies. The gravitational force gradually pulls the galaxies towards each other to form clusters and superclusters.

The difference in density in CMB provided seeds for the formation of galaxies by creating a path for stars to form and ignite, which then drew together to form galaxies.

The Universe is growing, and its size in this epoch is 93 billion light-years in diameter. In addition, the epoch occurs between 1 billion years after the Big Bang and the present day, and the temperature of the Universe is between 60 Kelvins and 2.73 Kelvins.

We are currently living in the Era of Galaxies.

Here are some frequently asked questions about Mission 08, Era of Galaxies

Has the Formation of Galaxies Ended?

The galaxy formation process has not stopped. The Universe continues to evolve as new galaxies form. In fact, we live in the Era of Galaxies.

What Role Does Dark Matter Play in This Epoch?

Galaxies appear to have a high distribution of dark matter around visible stars.

The dark matter halos increase the effective size of galaxies and cause them to collide with other galaxies.

The collision of small galaxies results in the merging and formation of giant galaxies.

What Causes Galaxies to Form?

Gravity began causing irregularities in the gas in the Universe, causing stars to pull towards each other to form galaxies.

Also, the difference in CMB created a path for the stars to form and ignite, which later were drawn together by gravity to form galaxies.