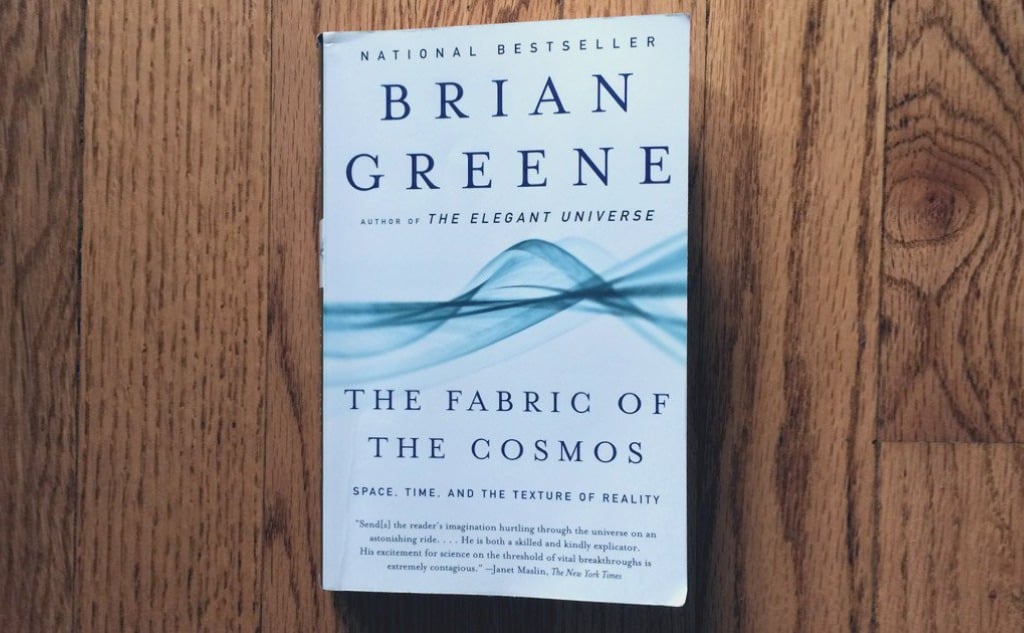 This is a review of the book The Fabric of the Cosmos: Space, Time, and the Texture of Reality by Brian Greene.

This book takes on the most complex topics concerning space and makes them accessible to everyone.

“The Fabric of the Cosmos: Space, Time, and the Texture of Reality” by Brian Greene

“The Fabric of the Cosmos” Review

Brian Greene’s The Fabric of the Cosmos: Space, Time, and the Texture of Reality guides the reader through some of science’s most ambitious and complex topics.

Brian Greene seeks answers to the questions we all ask.

What’s space made of?

Your journey will take you deep into some of the universe’s darkest, most mysterious realms.

You will uncover things about your own consciousness that are sure to shock you.

Best of all, there exists no greater tour guide than Brian Greene.

Greene takes you throughout space and history to unravel and explore astonishing subjects like string theory, time, quantum teleportation, time travel, and more.

Not to mention, each massive topic is filled to the brim with helpful examples and explanations.

Upon finishing The Fabric of the Cosmos, your outlook on space, time, and everything it is made will never be the same again.

It becomes painfully clear why this book has appeared on the New York Times Best Seller list and virtually any scientific “must-read” lists.

So many books hover over a topic, cross that critical threshold, and it suddenly it becomes blatantly obvious that you have become disengaged and uninterested. Particularly, scientific books are as guilty as any genre of this crime.

Not to mention, you may decide to skip chapters. As a result, losing valuable information and plot material.

Worst of all, you may find that you’ve lost interest in the remainder of the book in general. Heaven forbid this lost interest occurs anywhere near the book’s beginning!

Brian Greene to the rescue. Greene brilliantly drives a topic home repeatedly yet manages to keep it fascinating.

Plus, with his incredibly deep and passionate knowledge, bringing complex topics down to the layman is no easy task.

In particular, the book’s consistent focus on Einstein’s famous Theory of General Relativity struck me as brilliant.

As such, truly understand the beautiful nuances of the theory tends to prove very difficult.

However, Greene continues to showcase Relativity’s concepts in a variety of different ways, examples, settings, and more.

Basically, it’s near impossible to read this book and not at least have a solid working knowledge of General Relativity. Impressive!

It doesn’t get much better than quantum for those interested in cutting-edge, fascinating, and frankly baffling scientific concepts.

But, being unknown and elusive by nature makes it astoundingly hard to explain. Let alone explain in mere chapters or sections.

An area where Greene excels is his gentle and accessible explanations.

Naturally, in doing so successfully, he spares fine intimate details.

However, he beautifully hand-picks what could and should be omitted as not to overwhelm his reader.

Admittedly, some topics may still require a second glance or refreshment.

But, another powerful strength of this book is its culminating ability to reference several previous chapters and concepts.

Being that they all build upon one another, this provides a wonderful journey of a read.

Something New For Everyone

Often, another pitfall of scientific reading is that it may not offer the new information you were seeking.

For instance, when you become deeply indulged in a subject, you often find yourself reading redundant explanations, hoping to find small bits of new information.

Yet another specialty of Greene is to enrich even widely-known subject matter with fresh, new, and fascinating tidbits.

Even things we experience with our own senses in daily life, like gravity, become loaded with “I didn’t know that!” moments in nearly every paragraph.

Knowing Brian Greene is a professor makes it hard to imagine that each class is not truly entertaining and wildly impactful.

The Confusing Strings of the Universe

A hefty portion of the book’s later half is devoted to string theory.

For those unaware, string theory is a very progressive and modern theory to the fundamentals of spacetime and matter itself.

Essentially, the fields and matter in which we all live and die to result from specific waves frequency of cosmic strings. Like a cosmic melody being played.

However, as you may guess, the theory’s intricacies are both not fully understood and immensely complicated. Therefore, I could never discredit anyone for not making each paragraph and word crystal-clear.

Not to mention, by trade, Greene is a devout string theorist.

All in all, while this part of the book is highly interesting and fairly crucial to his work, it stuck out a bit.

I only say “stuck out” in the sense that it was considerably more difficult to digest.

Then again, string theory is new and foreign mostly to me. A more avid reader may breeze through this section.

Brian Greene is a professor of physics and mathematics at Columbia University in New York. He is also currently serving as director of Columbia’s Center for Theoretical Physics.

Particularly, Greene is world-renown for his passion and contributions to the field of superstring theory.

Accurately, the Washington Post once deemed Greene “the single best explainer of abstruse concepts in the world today.”

Greene has officially paved his way into the elite “science popularizers,” with the likes of Bill Nye, Neil deGrasse Tyson, and others.