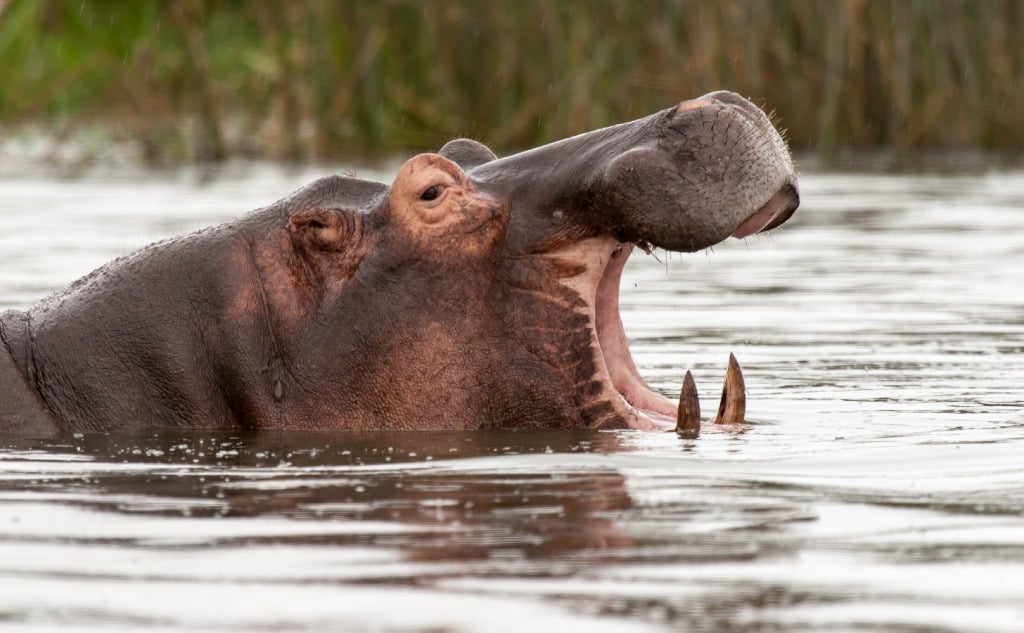 Here’s who wins in a fight between a gorilla and a hippo:

Even though gorillas have an impressively strong bite and can cause serious damage, still they are no match for a hippo’s bite force.

Hippos can deliver a 2000 PSI (pounds per square inch) when biting and gorillas have a biting force of 1300 PSI.

So if you want to learn all about who wins in a fight between a gorilla and a hippo, then you’re in the right place.

Who Wins in a Fight Between a Gorilla and a Hippo?

In a hypothetical fight between a hippopotamus (Hippopotamus amphibious) and a gorilla, the hippo will come out victorious.

The sheer size of the hippo is the animal’s biggest advantage. As big as gorillas are, hippos are still much bigger. Other factors that would affect the outcome are strength, skill, and intelligence.

Although the gorilla is more skillful and more intelligent than the hippo, its massive size disadvantage is simply too much to overcome. Thus the undisputed winner is the hippopotamus.

The chances of actually seeing a hippo fight a gorilla, however, are close to zero.

Since both species cannot clash in natural real-life settings, determining a theoretical winner requires examining and comparing some key facts about hippos and gorillas. Only then can we make a fair prediction.

What Is the Basic Information on Gorillas and Hippos?

Gorillas are the largest living primates on Earth. They are mainly herbivores that consume stems, leaves, and fruits. Five percent of their diet consists of animal protein coming from ants, termites, and larvae.

These are social animals that live in groups or families ranging from 2 to 30 individuals. At the top of the group, there is a dominant male leader called a “silverback.”

Wild gorillas can only be found on the African continent in the tropical and subtropical forests south of the Sahara Desert.

Wild gorillas are the most endangered of all ape species. Strict laws protect the 200,000 specimens left in the world.

Gorillas are very intelligent and can produce more than 24 different vocalization sounds, each containing a different message. Captive gorillas are thought by some to have an IQ between 75 and 100 (the human average is around 100), though many skeptics doubt this claim.

Hippopotamuses are half-terrestrial, half-aquatic animals that also inhabit sub-Saharan regions. They prefer areas with abundant water where they spend 16 hours a day cooling and keeping their skin moist.

Gorillas, on the contrary, are afraid of water because they don’t know how to swim.

Hippos are nocturnal animals and can be mostly seen foraging during the night. They are the third-largest terrestrial mammal, right behind elephants and rhinos.

Even though they may appear as humongous pigs, biologically hippos are more similar to dolphins, whales, and porpoises.

With only 150,000 wild hippopotamuses left in the wild, the species is considered vulnerable. Despite being related to whales, they are not as intelligent. That doesn’t necessarily mean they’re stupid, though.

What Is the Behavior of Gorillas and Hippos?

Generally speaking, gorillas are very peaceful and quiet creatures. They keep their business to themselves and only engage in confrontation when it is of utmost necessity.

Confronting with intruders, threats or other gorillas starts with screams, barks, and roars.

They can be especially dangerous when provoked. You can’t qualify gorillas as territorial animals because they sometimes tolerate members of different groups coming to visit when mutual territories overlap.

Hippos for the most part are also social animals. Their groups are called hippo schools and consist of 10 to 30 individuals.

All hippos are highly territorial and don’t tolerate other beings invading their habitats.

Interestingly, hippos are territorial only in the water. On land they tend to ignore other beings, so there is a situational change of character.

They have such bad tempers and aggressiveness that sometimes adults kill younger hippos for no evident reason. Before they attack, they display their deadly teeth to scare off threats.

Which Animal Is Bigger: The Gorilla or the Hippo?

Does a Gorilla Bite Stronger Than a Hippo?

Even though gorillas have an impressively strong bite and can cause serious damage, still they are no match for a hippo’s bite force.

Hippos can deliver a 2000 PSI (pounds per square inch) when biting and gorillas have a biting force of 1300 PSI.

A hippo’s killing power is not just in the ferocious biting strength, but also in the possibility to open its mouth at a 180-degree angle.

They don’t always use their mouths first in fights and more often rely on their enormous size to pursue and knock enemies on the ground.

A gorilla’s bite force is a direct result of an herbivorous diet that made their jaw muscles and neck muscles pump up.

What Are the Strength, Speed, and Endurance of Gorillas and Hippos?

Scientists estimate that gorillas can lift a weight 27 times heavier than their own bodyweight. That would come to 4,000 pounds (1,810 kilograms) of deadweight.

Needless to say, hippos aren’t able to use their legs for lifting, so no comparison there.

What we can compare is the running speed.

Although you might imagine hippos as clumsy and slow, they can run at 30 miles per hour (48 kilometers per hour). Because of their bulky build, they can’t maintain the high speed for more than a couple of seconds, but that’s usually long enough for an attack.

Their usual running speed is 25 miles per hour (40 kilometers per hour).

They, too, have poor endurance and can sprint only in short bursts. But they are more than capable of moving fast over rough terrain, which cannot be said about hippopotamuses.

How Do Gorillas and Hippos Attack?

Hippos don’t usually need to defend themselves because few animals are willing to attack such massive beasts. Also, their skin is more or less a thick armor that’s really hard to break.

If something still decides to go after hippos, they will defend themselves by joining in herds.

Gorillas also use their numbers when they are defending themselves. A lonely gorilla is always in great danger and will most likely use its climbing abilities to get up on a tree and flee the scene.

When facing predators, males stand erect, show their sharp canines, and beat their chest to scare their foes off.

A hippo will either charge or hit potential victims with its head. When it has a chance to bite, it will do so without hesitation.

Gorillas in fighting mode make use of powerful arms and legs to grapple their enemies and sink their long canine teeth in.

Are Hippos or Gorillas More Dangerous for Humans?

Hippos are responsible for more than 500 human deaths in Africa each year. Only one person lost his life after being attacked by a gorilla throughout the whole 20th century.

There’s really no competition in the comparison. Hippos are far more dangerous for humans than gorillas are.

Only two types of hippos inhabit the Earth today. One is the common hippopotamus (Hippopotamus amphibious). The other is the pygmy hippopotamus (Choeropsisliberiensis).

Pygmies can be found in forests and swamps in West Africa and are way smaller than the common hippo.

In the wild, there are two gorilla species: the western gorilla and the eastern gorilla. Each of these two species can be further divided into two subspecies.