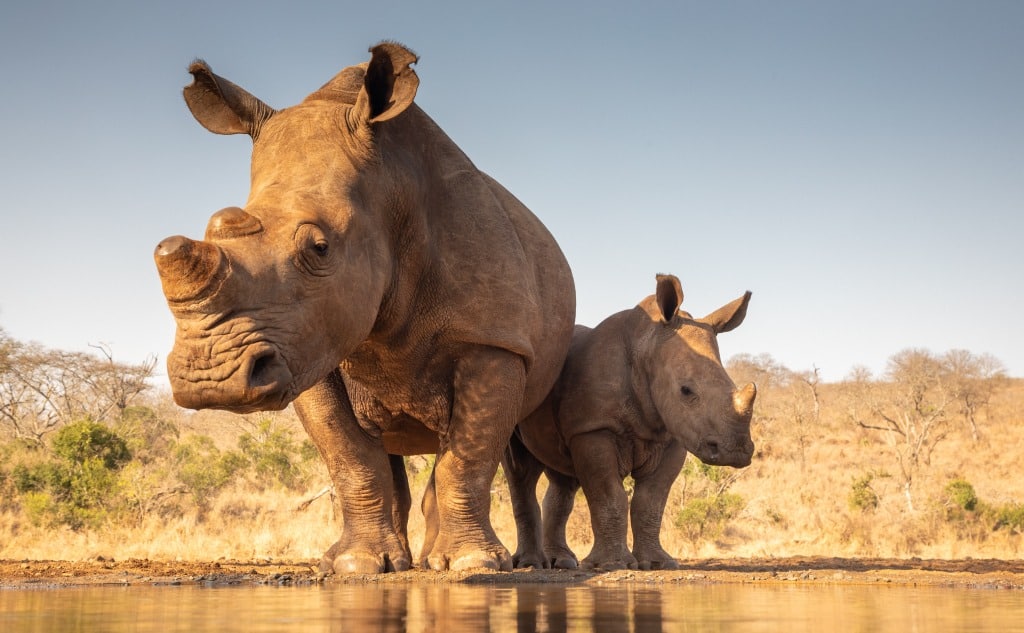 Here’s whether a gorilla or a rhino would win in a fight:

The rhino is much heavier, faster, and happier to fight than the gorilla. With its horn or lower teeth, a rhino could impale and throw a gorilla, resulting in a win. Neither gorilla species would be able to defeat either rhino species.

So if you want to learn all about whether a gorilla or a rhino wins in a fight, then this article is for you.

Who Wins in a Fight Between a Gorilla and Rhino?

Rhinos are a lot heavier, faster, and happy to fight than gorillas are. If a rhino were to impale and throw a gorilla with its horn or slash with its lower teeth, it would most definitely win the fight.

Gorillas and rhinos have no obvious reason for getting in a fight, which is good news for the gorilla.

Both animals are on the more defensive side because neither of them is a predator.

They carefully observe their surroundings for possible dangers to their groups. If they attack in an attempt to defend, once the danger passes, their aggression will quickly vanish.

The difference in size and weight between different species of rhinos is significant. The two species of gorillas and their respective subspecies are pretty much equal in size. However, neither gorilla species would be able to defeat either of the rhino species in a fight.

How Do Rhinos Defend Themselves?

Rhinos defend themselves by charging whatever threat crosses their paths. Although peaceful, they are far from being true pacifists. Once in a fight, they become very aggressive.

One of their best defensive attributes is the thickness of their skin.

Just like elephants, rhinos have skin that’s 2 inches (5 centimeters) thick. That makes it hard to penetrate, but rhinos are still sensitive to sunburns. That’s why they spend a lot of their time in mud avoiding the sun’s rays.

How Do Gorillas Defend Themselves?

Gorillas don’t attack other gorillas and animals if there isn’t a reason for it. When a threat is lurking from the shadows, it’s time for the alpha male gorillas, called “silverbacks,” to step in and defend the group.

The silverback is the leader of the group.

The large silverbacks will try to avoid fighting as much as possible.

A gorilla tries to scare off his opponent before engaging. To do this, he stands on his back legs in an upright stance and starts beating his chest, producing intimidating sounds.

The large canine teeth serve as a warning to potential opponents. If that doesn’t solve the problem, the silverback will most likely charge at the threat.

How Do Rhinos Attack?

If a rhino charges at its opponent, two things can happen. If it’s an African rhino, it will use the horns for fighting in an attempt to either impale or throw its adversaries. Asian rhinos fight by using their bottom teeth in a slashing motion.

When it’s other species, the rhino will likely end the attack once it sees the threat is walking away or is immobilized; when it’s one of their own kind getting on their nerves, it gets a little messy.

Rhinos are known for fighting each other to death. Of all the rhino species, the black rhino is the most aggressive one. They have the highest rate of deadly combat of all mammals. Approximately 30 percent of black rhino females and 50 percent of males die as a result of injuries inflicted by mutual combat.

How Do Gorillas Attack?

Gorillas often attempt to harm their opponents by throwing rocks at them or using strong sticks for beating. These primates are intelligent and know that they can use weapons to inflict damage from a safe distance.

However, when the fight gets really wild, they will use punches and bites to win. There’s no real strategy other than pushing and giving punches with every single muscle in their massive bodies. Bites are rare, but they can happen as well.

Why Do Rhinos Need Their Horns?

Rhinos have horns for multiple reasons.

The horns are tools that make their way of life a lot easier in the harsh African environment. On the nutritional aspect, rhinos use their horns to dig for water and break branches for food.

The horn is also a weapon that can be used both for attacking and defending. Primarily, rhinos charge other competitors with their horns pointed at them to defend territories and to defend their calves.

Who Has Better Hearing and Eyesight?

Rhinos have really bad eyesight. They are not able to spot a motionless person at a distance greater than 100 feet (30 meters). What gets them around is their strong sense of smell.

Gorillas, on the contrary, have pretty good eyesight. Because their eyes are on the front of their heads, they have binocular vision that creates a three-dimensional image with the ability to correctly visualize objects at greater distances.

Rhinos have excellent hearing, mostly because of cone-shaped ears that can pick up even the tiniest of sounds.

Gorillas are vocal animals that communicate with a variety of noises to keep themselves safe. They can hear their family members and unusual noises quite well.

Do Rhinos and Gorillas Meet in the Wild?

Gorillas live in dense forests, and their usual neighbors are forest buffalos, forest elephants, forest hogs, and leopards. Rhinos mainly roam the open savannahs and grasslands along with the other wild animals that prefer open fields.

What Are the Natural Enemies of Gorillas and Rhinos?

There are no real predators to pose a threat to adult rhinos. The rhinos sometimes fight elephants for territory. Even though elephants are significantly bigger, they usually avoid confronting rhinos because of the aggressiveness and thick skin of the rhinos.

Big cats, crocodiles, hyenas, and African wild dogs would never attempt to hunt adult rhinos. However, young rhinos can fall victim to one of these predators.

Leopards and crocodiles are probably the only carnivores that might see a gorilla as their prey. Even though it’s highly unlikely for a crocodile and a gorilla to meet, leopards do pass through gorilla habitats, occasionally attacking them.

How Many Species of Gorillas Are There?

There are two main gorilla species:

These animals are distributed in patches in parts of central Africa and east-central Africa. The Eastern gorilla, precisely the lowland subspecies, is the largest of them all.

Male eastern lowland gorillas weigh between 331 and 461 pounds (150-209 kilograms), and the females weigh almost twice less. When they stand on their back legs, the males reach a height ranging from 5 foot 7 inches to 6 foot 5 inches (1.69–1.96 meters). The females are noticeably shorter.

How Many Species of Rhinos Are There?

More than 100 rhino species were roaming Europe, Africa, and Asia in the past. Today, with only five species and a total of 30000 animals, these majestic animals can be found in parts of Africa and Southern Asia.

The five living species of rhinos include:

The Black rhino inhabits patchy areas from Kenya to South Africa. Adult individuals stand at 55–71 inches (140–180 centimeters) in shoulder height and are 9.8–12.3 feet (3–3.75 meters) long. The females are smaller than the males.

In most cases, Black rhinos have two horns and occasionally you can encounter individuals with a small third horn.

The White rhino is the largest rhino species in the world and the second-largest terrestrial mammal after the African elephant. Almost 99 percent of the species live in Southern Africa.

Adult male White rhinos can have a 6.1-foot (1.85-meter) shoulder height and a massive 7937-pound (3600-kilogram) weight. The females are quite smaller, but still their average weight of 3748 pounds (1700 kilograms) is very impressive.

The body length in both males and females varies between 12 and 14 feet (360–420 centimeters). On the snout, the White rhino has two horns. The front horn is larger with a 35-inch (90-centimeter) length, and it can sometimes reach 59 inches (150 centimeters) long.

He is the closest competitor to the white rhino for title of largest rhinoceros. This animal has only one large horn that can be 24 inches (60 centimeters) long.

Javan rhinos have the smallest horns of all living rhino species. Their horns are usually less than 7.9 inches (20 centimeters) long.

The smallest of all five rhino species is the Sumatran rhino.

Comparison of Rhino and Gorilla Attributes

We will compare the two largest representatives of the gorillas and the rhinos.