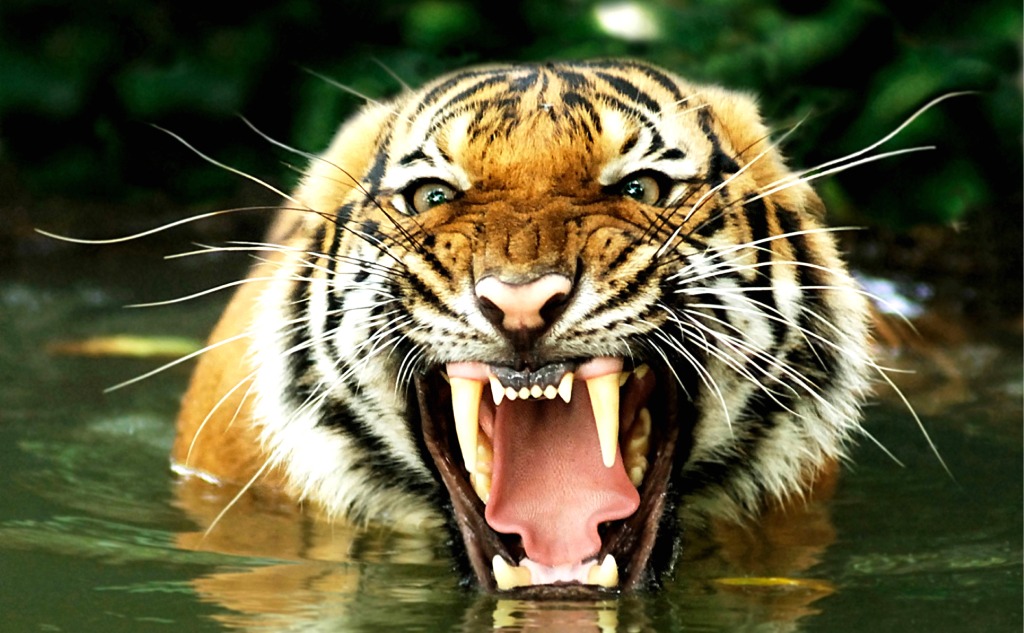 Here’s who wins in a fight between a tiger and a gorilla.

In most fights between a tiger and a gorilla, the tiger has more chance at defeating the gorilla.

However, the gorilla is not a safe and easy target and can inflict potentially lethal blows on the tiger.

Gorillas are strong enough to deter any apex predators from preying upon them.

So if you want to know why the tiger might win in a fight between a gorilla, then you’re in the right place.

Who Wins in a Fight Between a Gorilla and a Tiger?

Most of us believe that the lordship of the wild belongs to the big cats, with some beasts sharing power, maybe the hyena or the elephant.

So it might be a pleasant surprise for many of us that one of our cousins, the gorilla, is also a strong competitor and can challenge the big cats whenever needed. Felt proud?

Both the gorilla and the tiger are large animals and are strong enough to give a bloody nose to any potential enemy.

To answer this, we must first look into the strengths and defense strategies of both.

So, let’s introduce both of these contenders.

Who Is the Gorilla?

Evolution has created many close as well as distant relatives to us. The largest and one of our closest relatives are present in the genus Gorilla.

Gorillas and humans separated from our last common ancestor about 10 million years ago. So let’s have a brief overlook of gorillas.

Habitat and Species of Gorillas

The strongest of primates and the pride of the Hominidae family inhabit the tropics of central Africa.

They are our close cousins, and their DNA is as much as 98% similar to ours.

Two species, the eastern and western gorillas, and many subspecies have been recognized.

Gorillas are herbivore animals and feed on all types of vegetation, including fruits, stems, and bamboo shoots.

The leaves constitute an overwhelming part (86%) of their diet.

However, the western lowland gorillas are also known to eat ants and termites. They break the nests of termites and devour their larvae.

In contrast to many other animals, the gorillas are generally non-territorial, meaning they are not as aggressive in defending their territory.

However, they will defend their troop or status when called for, sometimes violently and to death.

You might have assumed that an herbivore animal can’t challenge dangerous carnivores.

That is not true for gorillas. They are mostly peaceful in stable, well-established troops and rarely fight.

Nevertheless, they are strong creatures and can fight and defend themselves when necessary.

Any animal stupid enough to awaken this giant is likely to suffer terribly.

Gorillas are strongly built, quite robust, and have a strong chest. In addition, they have powerful, muscular arms, which are an estimated 15-20% larger than their legs.

Their strength to body size ratio is majestic.

Gorillas can be up to 10 times stronger when compared to their body weight.

Their supreme strength enables them to lift enormous loads, sometimes 10 times their own weight.

Their jaw is strongly built, and they have 32 teeth, just like us humans.

However, their teeth are stronger, and they have a crushing biting force of 1300 pounds per square inch (psi).

For comparison, a human punch generates around 120-150 psi.

Their jaws also have canine teeth about 2 in (5 cm) long, which they use effectively during the fighting. They will also use their canines to frighten away various intruders.

Almost all of us are familiar with these big cats.

Tigers are strong, majestic, shrewd, and eye-catching creatures of the wild.

At the same time, they are ferocious fighters and hunters.

A brief introductory review will help you to compare them with gorillas.

Habitat and Species of Tigers

They traditionally inhabit the southern half of Asia, with the exception of the Arabian Peninsula.

Various regional subspecies have been recognized, but the most well-known is the Bengal tigers and Siberian tigers.

The tiger (Panthera tigris) is one of the apex predators out in the wild, meaning they are efficient killing machines and can kill and eat a wide array of animals, from termites to young elephants.

They prefer to eat medium to large size ungulates and herbivores, such as spotted deer, zebras, water buffalo, and horses.

They are solitary and interact only briefly during mating or while sharing a kill.

They prefer to stand on their hind legs and use their strong claws and teeth during an attack.

This is in sharp contrast to the African and Asiatic lions, which prefer to fight static.

This fighting position adds to the offensive and defensive powers, thus making them efficient killing machines.

They are light to reddish yellow (some say orange) and have vertical black stripes over the entire body.

They are proverbial for their beauty, strength, and speed. They are highly robust and intelligent.

They possess four strong claws on each of their four paws or feet, with a fifth specialized claw called a dewclaw.

Each claw can be almost 4 in. (10 cm) long. These claws are used to grasp their prey firmly.

Captive tigers in a zoo often weigh more than their wild counterparts.

Their jaws are adorned with mighty canine teeth.

Their canine teeth are 4 in. (10 cm) in length, which is the largest among all big cats.

The rhinoceros with a biting force of 1100 psi is also a near match.

In a Gorilla vs. Tiger Confrontation: Who Has the Advantage?

Of course, anyone can fight anyone in this world, even for no reason. But animals are a bit wiser.

They only fight for food, territory, and females.

A silverback gorilla is an herbivore, while a tiger is a carnivore.

So, there is no obvious competition for food.

The gorillas are also not the favored food of tigers.

Both the eastern and western gorillas are confined to Africa, while a tiger’s habitat is mainly the Asian landmass.

So, there is very little chance that they would match up naturally in the wild.

However, a wandering and hungry tiger might attempt to hunt Gorilla babies, which would induce a peaceful gorilla to attack.

In a fight between a tiger and a gorilla, a gorilla has the advantage of its strong chest, strong and lengthy arms, and enormous weight lifting ability.

Their huge and powerful arms can deliver a knockout blow and can break the backbone of any large cat.

In addition, their thick hide and long hairs can be helpful in their defense.

The intelligence of a gorilla can also be an important factor in any fight with a big cat.

The tiger has the advantage of its speed, lengthy, strong claws, and enormous canine teeth.

The devastating biting force of the silverback partially compensates against the large size of the tiger’s canines.

The tiger also has the advantage of a muscular body and thick fur.

Does the battle seem like a draw? Let’s have a look into the furious battle.

Gorilla vs. Tiger: The Battle

So, what would a hypothetical fight between a tiger and gorilla look like?

Such ferocious battles were a common source of amusement for Roman emperors.

So, let’s create an imaginary duel between a tiger and a gorilla in a Roman-styled amphitheater.

At the start of a battle, both the tiger and gorilla may want to avoid each other because neither is the favorite food of the other.

But if the battle does happen, the tiger has an overall edge due to its larger size, speed, powerful claws, and more maneuverability.

The thicker, stronger canine teeth of a tiger could easily penetrate the skin of gorilla.

The razor-sharp and long claws of the tiger could also easily shred the hide of the gorilla.

Does the Gorilla Have A Chance?

The strong-willed, tenacious gorilla will nevertheless be able to put up a strong and determined fight and inflict severe injuries on the tiger.

The thick neck of the gorilla can avoid an easy victory for the tiger.

The only serious chance for a gorilla to defeat a tiger could be to strike its backbone with its massive arm.

This type of attack could break the backbone of the tiger, thus knocking it down.

Gorilla vs. Tiger: A Hypothetical Scenario

The gorilla may attack first, sensing that a long, drawn-out battle would not be in its favor.

The attempt to bite the tiger fails due to the extreme maneuverability of the tiger.

A similar attempt by a tiger to bite the throat of gorilla also has similar outcome due to the interference of the gorilla’s strong arms.

Both beasts are now furious and fully engaged.

The tiger starts roaring, while the gorilla starts beating its chest (recall the movie, King Kong).

As the offensive by the gorilla has failed, now the initiative is on the side of the tiger.

The tiger uses its powerful claws to attack the eyeball of gorilla. The gorilla could not counter the claws, and its eyes are injured.

The tiger attacks the throat of blinded gorilla and kills it.

Are you sad at the cataclysmic defeat of our cousin by a cat? I am also.

Who Wins in a Fight Between a Tiger and a Gorilla?

In the end, it can be argued that both of these amazing creatures are large animals with effective offensive and defensive skills.

Both have a massive build and strong musculature.

The chances of an actual battle between them are almost nil.

But nevertheless, in most battles of this kind, the tiger has more chance at defeating the gorilla.

However, the gorilla is not a safe and easy target and can inflict potentially lethal blows on the tiger.

The long and short of it is, gorillas are strong enough to deter any apex predators from preying upon them.