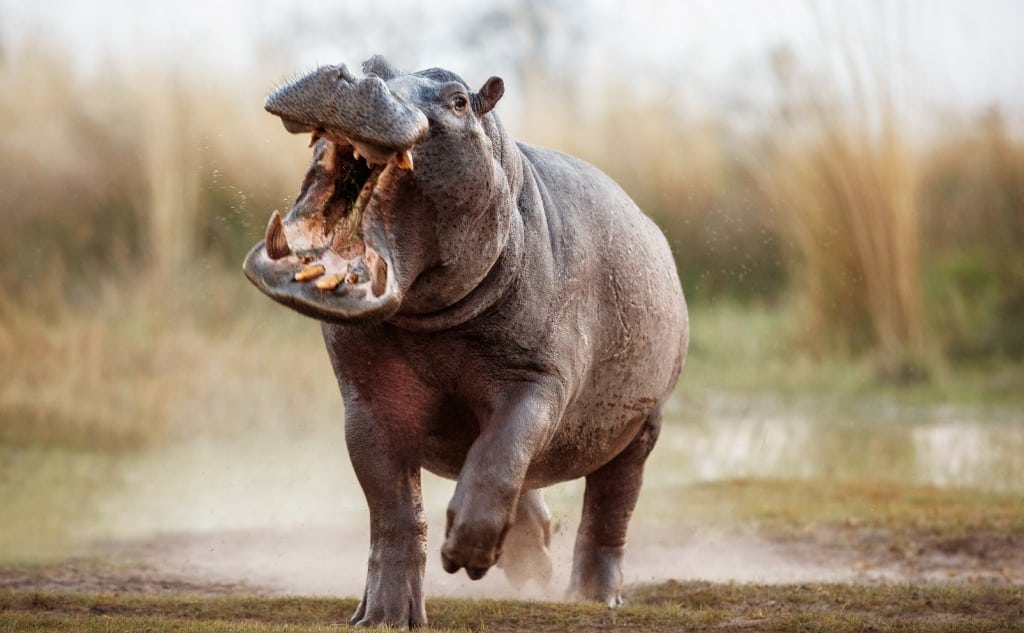 This is whether hippos can kill lions.

In short: yes, hippos kill lions, and so do lions kill hippos.

So if you want to know all the details about hippos killing lions and lions killing hippos, then you’re in the right place.

Who doesn’t love lions? The lion is the most majestic, bravest, and a seemingly invincible apex predator.

Who or what would dare to defy it or take it on in battle? Well, the hippopotamus might dare to sweep the king from his throne.

With its huge weight, largemouth, powerful jaws, and robust canine teeth, the hippo can be dangerous.

Let’s take a closer look at this animal outlaw.

The word hippopotamus is Greek and is translated into English literally as “river horse.” Hippo means horse. Potamus means river.

Despite being so stocky and bulky in appearance, hippos can move fast, with their maximum speed of 30 mph (48 km/hour) on land and 5 mph (8 km/hour) in water. As a result, they have a high level of maneuverability and can defend themselves very effectively.

Here are some distinctive characteristics that make hippos unique in the animal world:

Do the hippos kill lions for food or vice versa?

No, absolutely not. Hippopotamuses are herbivores. Their digestive system resembles that of cows and other herbivores.

They are unable to digest meat and don’t kill lions for food. On the other hand, lions will attack hippos to eat them.

Why Would Hippos Kill Lions?

Fights occur in the jungle for three reasons:

Reason 2 and 3 are nonstarters since hippos do not eat meat and are not interested in lionesses.

Hippos Will Kill Lions In Self-Defense

Hippos fight with lions because lions attack them and their calves. Likewise, lions might attack hippos if no other food is available.

It’s impossible for a single lion to kill a hippo. So, therefore, they attack hippos in groups. If they succeed, one hippo would be enough to feed the whole pride for days. But there is a great risk to enjoy such a large feast.

Hippos Will Kill Lions To Defend Their Territory

Hippos are extremely territorial in water and become highly aggressive if their territory is breached by unwanted animals.

Male hippos maintain a short range of water as their territory. They will also need to protect up to 12 females and their calves.

Most of the time, the lions won’t breach a hippo’s territory. They attack them only when they come out of the water to forage during dusk because hippos become solitary outside water and don’t mark territories.

Hippos fight with crocodiles more than any other animal because they often occupy the same territory.

So Who Wins Fights Between Lions and Hippos?

A single lioness cannot take down an adult hippo alone. Even if the lioness coordinates their attack on a hippo, they may not be able to use their signature tactic of strangling the throat.

They may injure a hippo by inflicting so many wounds that it bleeds to death. However, even that would not be easy because hippo’s skin is so thick and slippery that it is hard to successfully bite.

Taking down a hippo is never easy. However, a little mistake can cost the lioness its life.

The size of a hippopotamus is about 10 times larger than that of a lion. So, a single lioness would never take the risk of attacking a hippo unless absolutely necessary.

There is no chance to win against such a huge rival. If lions choose to attack, they always attack a solitary hippo as a team. Sometimes whole pride is involved.

Lionesses prefer to attack the hippo’s calves (kids), but they are usually accompanied by their moms. Nothing is more furocious than an angry mother.

Hippopotamuses have the strongest jaws among all terrestrial herbivores. Once closed, they can provide a biting force of 1800 PSI (pounds per square inch), strong enough to crush a watermelon like a grape.

A hippo can open its jaws to 180 degrees which breeds fear in its enemies. Its bite could take off a lion’s head. Once the head of the lion is stuck in the jaws of the hippo, it becomes extremely difficult to get away.

The canine tusks of hippos are 2 ft. (61 cm) long on average and can reach over 6 ft. (up to 2 meters). They are long enough to cut the throat of a lion and strong enough to crush its bones.

Even the pigmy hippopotamuses have the same teeth arrangement as African or Cape hippos. The hippo’s teeth can cut through the skull or pierce the lion’s chest cavity, depriving it of oxygen in a single bite.

Hippopotamuses are one of the most unpredictable animals in Africa. They fight with their fellows for territory, females, and to establish their dominance.

Hippos are considered the most dangerous animals in Africa. Each year, around 500 people die due to hippopotamus attacks in Africa.

This unpredictability of these simple, innocent-looking, and bulky creatures that seem to be too slow to do anything, makes them the most dangerous adversary for lions who underestimate and attack them. Then, they taste the bitterness of defeat.

In the end, I would say that although the king of the jungle can kill anything, hippos are never an easy target. Lions usually avoid them. Some try to tease them, but this often results in an injury that can prove fatal.

So isn’t it better for his Majesty to just prey upon the smaller or medium-sized herbivores that don’t have any defense mechanisms except to run away? It’s better not to mess with these giants.