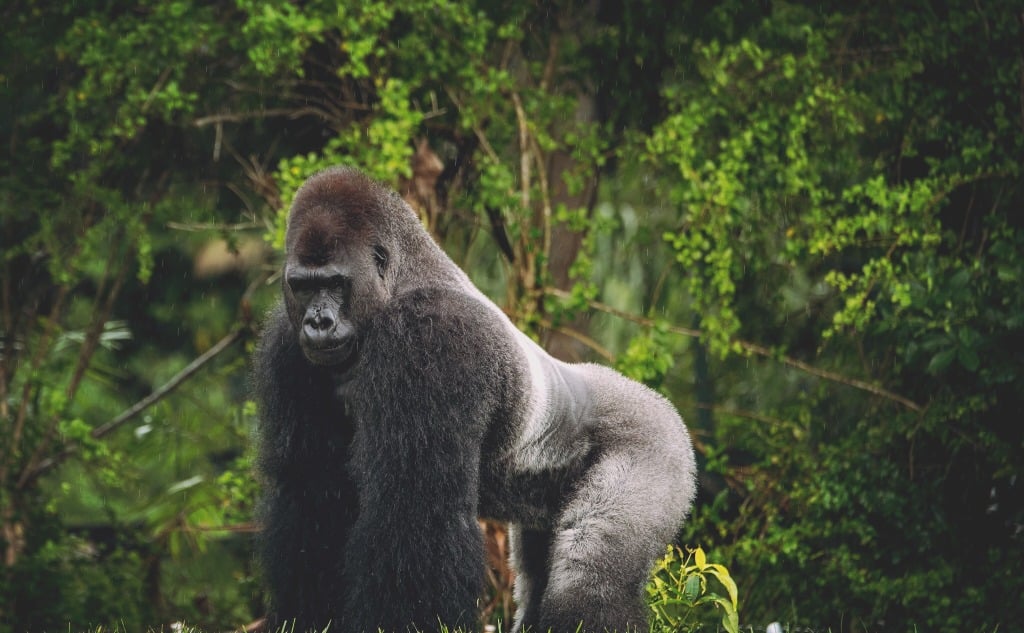 Here’s how strong the punch of a gorilla is:

Boxers average 750 pounds of force, which is more than the average puncher but still far less than the gorilla.

So if you want to learn all about the punch power of a gorilla, then this article is for you.

How Strong Is the Punch of a Gorilla?

One significant contributor to the powerful gorilla punch is the length of the animals’ arms. Also, gorillas have dense muscle mass.

The muscle density is four times higher than most professional human fighters. Their muscle mass and massive arms both contribute to their incredible power—it’s a little trick of nature known as “robustness.”

You can find footage displaying the strength of gorillas. The animals often pull banana trees over and break them in half as if they’re tiny branches.

Surprisingly enough, there’s no committed scientific research on the strength of gorillas. Most of the accumulated data comes from assumptions and comparisons.

What Would Happen if You Got Punched by a Gorilla?

Gorillas are peaceful animals. It’s almost impossible to get them to fight unless they feel threatened by your actions. However, if you push them too far, you can get yourself in serious trouble.

A direct hit to the head will crush a human’s skull, which can take 550 pounds of force—a lot less than what a gorilla’s arm can produce. Punches in the torso can lead to broken ribs, organ rupture, severe bleeding, and eventually death. There’s no doubt that a single gorilla punch is enough to break a human being’s leg or arm.

Did you know that the arms of the gorillas are much longer than their legs? Their stocky legs are approximately 20 percent shorter than their giant arms.

Can a Human Punch as Strong as a Gorilla?

A human can train his whole life, build muscle, and dedicate himself to becoming the strongest person on the planet, but they still won’t be able to punch as powerfully as a gorilla.

There’s a vast difference in certain biological and anatomical characteristics (such as the manner of walking) between humans and gorillas. One of those differences is the drastic difference in arm development.

Humans simply are not anatomically capable of punching as powerfully as a gorilla.

When Do Gorillas Punch?

There are a few situations in which the traditionally peaceful gorilla becomes an unstoppable beast. An adult male, called a “silverback,” starts throwing punches whenever his group is attacked or threatened. These males protect what they love, sometimes with their lives.

Males can show aggression towards other males to establish dominance. This rarely leads to a fight. Weird noises and chest punches are generally enough. Females can be aggressive towards other females, as well.

Sometimes, though, the silverbacks go off. They bite, bash, and throw punches. Everyone and everything has a limit—including gorillas.

How Strong Is a Gorilla Compared to a Human?

Only a relatively few humans have bodybuilder physiques, but all gorillas do. Gorillas are hulking, powerful creatures. Can a human bodybuilder’s strength compare with an average gorilla?

As the largest primates walking on the planet, gorillas are the strongest ones, as well. They rank near the top of the strength hierarchy of all animals on Earth, in fact. Silverbacks can weigh between 287 and 507 pounds (130 and 230 kilograms).

The average human weights approximately 177 pounds (80 kilograms). That means an average male human can be two to three times smaller than a silverback.

How Much Weight Can a Gorilla Lift?

Scientists believe that gorillas are four to eight times stronger than the average male human. Their exceptionally muscular build makes it possible for them to lift a load of 1800 lbs (815).

A well-trained bodybuilder and a dead-lift professional can lift a maximum of 900 lbs (410 kg). That’s two times less than a gorilla that didn’t dedicate its life to lifting.

The African bush elephant is the largest living terrestrial animal and weighs around 13000 pounds. It’s highly unlikely that even the strongest silverback can lift an African elephant by himself.

Can a Human Fight a Gorilla?

A human can fight a gorilla, but the outcome wouldn’t be good. The gorilla is simply too powerful. If you had to go up against any animal in the world, a gorilla would be one of the worst draws you could get. You can only survive a gorilla fight if the gorilla chooses to let you, assuming you’re unarmed.

When gorillas fight, they abide by the laws of nature. There are no legal setbacks or moral concerns to stop them from seriously hurting their enemy.

The moral and legal rules of human society usually keep us from severely harming others. Such is not the case with gorillas. Their potential savagery can be observed from situations when one silverback male fights another one.

A large limitation for the gorillas compared to humans is that they don’t participate in practicing martial arts. Such combat sports teach humans how to use what they are given to defeat physically stronger opponents.

Gorillas have pairs of upper and lower canine teeth that are 2 inches (5 centimeters) long. Gorillas usually use these fearsome weapons to scare off opponents, but they can use them to bite too.

Many humans get close to gorillas and observe their behavior. Rare incidents happen when a gorilla decides to show who is boss.

Why Are Gorillas So Strong?

The greatest contributor to a gorilla’s strength is the fact that they use their arms as legs, too. Can you imagine the size of your arms if you used them as legs?

Take this for an example: if you go to the gym for the first time, you might struggle with 20 pounds (9 kilograms) of weight with your arms. That same amount of weight would be a joke for leg training.

Our legs are almost constantly active and get stronger faster than our arms. By putting a lot of stress-related activity on their arms while walking, the gorillas get a lot of daily exercises with all four limbs.

Gorillas are as strong as they are because their ancestors were, too. It’s all about genetics. Silverback males are heads and guardians of the groups of gorillas. These groups are called troops and can consist of 5–30 individuals.

Living in the African rainforest brings a certain amount of danger from a few predators. Gorillas are potential prey to leopards. Fighting them off to protect their families requires a massive amount of strength.

Gorillas have thick skin and large, heavy skulls. Their strength doesn’t just come out of their ability to throw e a punch, but also the ability to take one. Particularly endurable fighters are the mountain gorillas whose skin is covered in a thick coat of hair that protects them from extremely cold temperatures.

The bones of the gorillas are very thick. They are three times thicker than human bones and much more calcified, which means much, much stronger.

Are you wondering how an animal that doesn’t consume meat gets so strong? While eating an herbivore diet, gorillas sometimes get small insects, termites, or snails in their stomachs if those little creatures were attached to the plants.

An adult gorilla can consume as much as 66 pounds (30 kilogram) of food daily. Only 2–3 percent of the gorilla’s food is insects, snails, etc. It’s too little animal protein to build muscle.

Gorillas have long guts where huge amounts of bacteria are living. The bacteria use the cellulose from the plants to reproduce, and the gorilla uses the bacteria for protein.

A bacterium consists of animal proteins and helps all herbivores gain enough material to build strong muscles. To put it simply, gorillas don’t eat animal protein because they have a farm for animal protein in their digestive system.

Gorillas eat a lot of food. Most of their diet consists of bark, stems, and leaves. They consume around 140 different types of plants that provide a lot of fiber, minerals, and vitamins that keep the gorilla healthy and strong.