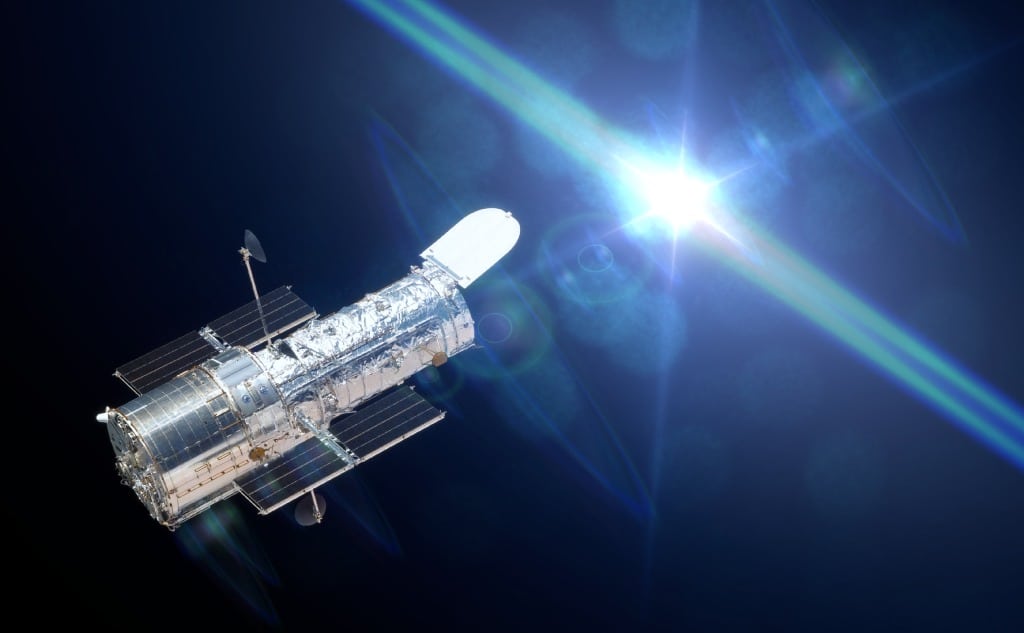 This is about the history of the Hubble Space Telescope.

Starting in 1946 with an idea, it’s still orbiting the planet.

So if you want to know all about Hubble Space Telescope’s history, then this article is for you.

Indeed, the scope has been our window into deep space, unlocking some of the universe’s greatest mysteries.

Not to mention, Hubble has delivered some of mankind’s most detailed, break-taking photos of the cosmos.

But, Hubble’s turbulent past and its long road to launch may shock you.

Why Build a Space Telescope?

Hubble launched in April 1990. However, desires and concepts for space-based optics date back to World War II.

Whereas telescopes in orbit would receive this light, and thus, far more useful information about our universe.

Later, Spitzer headed the national committee to plan such a large orbiting observatory.

Finally, in 1969, the committee published its full report, urging the approval and construction of an orbiting space telescope.

Overall, the report pleads, in great detail, why a space-based telescope would allow ground-breaking research and development in cosmology.

Firstly, NASA and contractors conducted deep research into the difficulties and hurdles of constructing such a fantastic tool.

Among the most important initial decisions, the project’s timeline.

Meanwhile, NASA’s plans for a Space Shuttle were now approved and in motion.

Not to mention, many credit this new flexibility as the tipping point for Hubble’s approval.

The Elephant in the Room … Funding

At last, with NASA on board, the project that would ultimately become Hubble Space Telescope had a hopeful and promising future. But, one massive piece was still missing, funding.

Which, at the time, was an astronomical amount of budgeting for space endeavors.

In other words, an incredibly tough sell for federal funding. In fact, in 1975, funding was initially denied unanimously by a House Appropriations Committee.

Yet, in true competitive spirit, denial only spawned determination. Before long, a full-fledged campaign to build the telescope, pioneered by NASA and influential astronomers, arose. In fact, Spitzer again headed the project, helping lead the charge.

Ultimately, such global synergies birthed plans for international collaboration on this project and future projects, like the International Space Station.

In the end, international teamwork scientifically benefits all parties. Not to mention, large costs, previously isolated to one country, could now be split, drastically reducing costs!

Furthermore, reductions in telescope mirror sizes and international collaboration eventually brought estimated prices to $200 million, half of the original budget.

Finally, in 1977, congress green-lit the budget, and the Large Space Telescope Project was officially born.

In 1978, design began with contracts awarded to both Perkin-Elmer Corporation for a mirror and Lockheed Missiles and Space Company for the spacecraft.

Originally, a 1983 launch would encounter several long delays. After all, while the mirror was completed in 1981, the final spacecraft assembly would not even begin until 1985.

However, 1983 would earn its place in history for naming the telescope after the notable astronomer Edwin P. Hubble.

Famous for his research of stars and galaxies, Hubble was the first to discover the universe’s expansion.

Finally, with Hubble’s assembly complete, NASA prepared for a 1986 launch.

However, one of the spaceflight’s greatest tragedies struck.

Space Shuttle Challenger launched into the Florida skies on a cold January morning during what seemed a routine launch.

Suddenly, only a minute into the flight, Challenger exploded, tragically killing all crew members.

Resuming launches in 1988, NASA was again prepared to launch.

Finally, on the morning of April 24, 1990, the Hubble Space Telescope launched aboard Discovery.

Included in the telescope’s initial payload were the following instruments:

Literally, after decades of waiting and lobbying, Hubble Space Telescope was in orbit, ready to amaze.

Indeed, the images allowed astronomers to observe and study the cosmos.

However, after record-breaking funding and years of planning, Hubble’s images were truly a point of embarrassment and despair.

Not to mention, NASA’s reputation was in grave danger. In fact, initial images from the telescope looked like this:

An aberration caused part of the high-tech scope’s mirror to be too flat, poorly receiving light.

In pure disarray, staff members scrambled to devise a fix for the mirror.

Finally, in time for Hubble’s first scheduled maintenance and servicing mission in 1993, a plan was hatched.

Basically, the instruments would compensate for the mirror’s aberrations, allowing the scope to properly function.

In December 1993, a record-setting five consecutive spacewalks were conducted, allowing crew members of the STS-61 mission to service Hubble.

Immediately, upon STS-61’s arrival back on Earth, the triumphant mission proved to be a genuine success.

At last, Hubble Space Telescope was returning crystal-clear images of the cosmos.

Hubble: Our Window Into the Universe

Despite its total $1.5 billion lifetime budget, rocky beginnings, and tribulations, Hubble has been successfully orbiting Earth for three decades.

No doubt, the space telescope has greatly enhanced our understanding of the universe.

Not to mention, along the way, some of man’s most notable space photos have been captured.