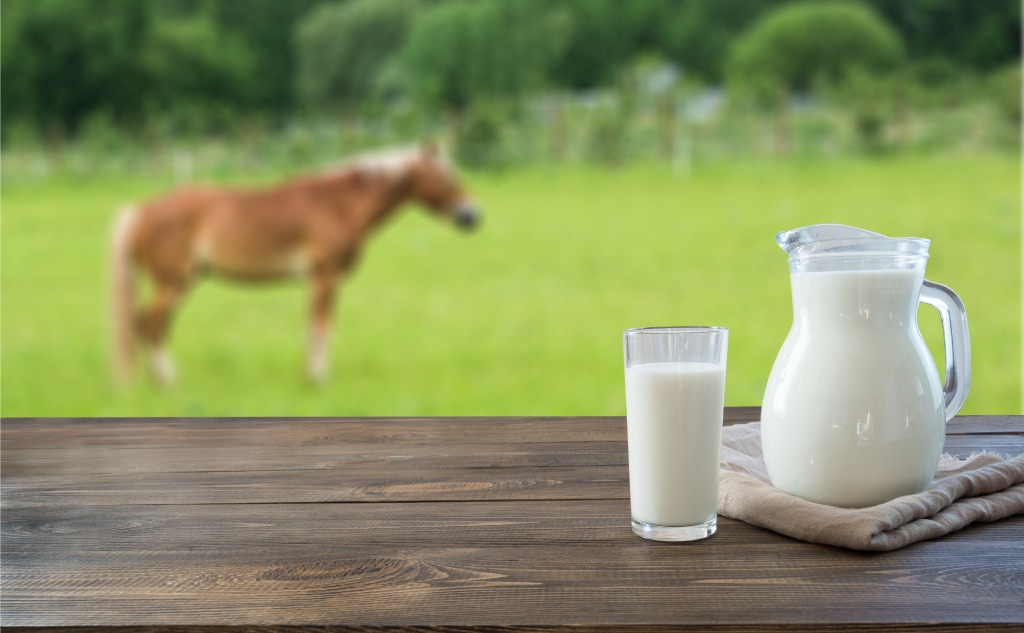 This is whether or not human milk horses, and if not, why that’s the case.

In short: Horses were not bred to be used for milk production.

So if you want to know all about milking horses, then you’re in the right place.

Who says that humans don’t milk mares? (Mare means a female horse.) Actually, we do.

Did you know that humans have been milking mares for centuries and still do?

Here are some examples:

Although horse milk is healthful and tastes good, horse milk is not an economically viable food option for humans because it is expensive to produce, less nutritious, and not easily available.

Horses were not bred to be used for milk production

To advance our discussion on mare’s milk consumption, let us first discuss the composition of mare’s milk so we can answer the age-old question if horse milk is similar to that of human breast milk.

What Is in Horse Milk?

A lot of literature says that the composition of mare’s milk is similar to that of humans. The main differences include the amounts of fat, lactose, and proteins, especially the protein casein.

With the total amount of solid contents coming in at about 10-11%, horse milk is thin and contains more water than human breast milk, cow’s milk, goat milk, or sheep (ewe’s) milk. It also contains much less fat.

However, it does contain much more protein and calcium. The lactose—

that is, the sugar in milk—is in almost comparable concentration. Normal values of different nutrients in mare’s and human milk are listed below.

Not An Exact Copy, But Could It Be a Substitute for Human Breast Milk?

Could it be used for that purpose anyway?

We have to remember that the difference in the composition is due to the fact that mammals produce milk for their young. The young of each species have different nutritional needs.

Yet, it is clear that horse milk can be consumed by humans and is consumed in many different regions of the world.

Then, why is it not popular or readily available at the grocery store?

Does it have a bad taste?

No, of course not.

Although mare’s milk is thinner than human or cow’s milk due to its low fat, it is drinkable and doesn’t have a bad taste or smell. It is sweeter than cow’s milk and tastes like diluted cow’s milk with a touch of almond flavor. I would say that taste is not the issue. Even some people don’t like the taste of cow’s milk.

Then, what’s the reason why mare’s milk is not consumed equally to other milks made by other mammalian species?

Why Do We Not All Drink Mare’s Milk?

The answer lies in the following factors:

As you know, the sole purpose of a breeding mare is to nourish a neonate (baby mammal, in this case, a horse) to make it a healthy horse. Horses today are now kept and bred for racing, beauty shows, and aesthetic preferences. In all these cases, milk production is a secondary, or I would say, a tertiary trait to look for.

The average milk yield of a mare is 11.6-23.3 qt./day (11-22 liter/day), which is less than that of the smallest cow breed. It is also important to note that the milk yield of the mare is not enough to fulfill all the necessary requirements of its own foal after it gets older than 2 months.

“Why don’t we improve the horse breeds for milk production?”

The answer is we do. Continuous efforts are being made to improve equine milk production, and the industry is reviving, but still, the main purpose of the breeding mare is to produce healthy foals to make good horses.

Despite the many health benefits, well-known history of feeding human infants animal milk as a substitute for human breast milk, horse milk just doesn’t measure up.

Mare’s milk has more water when compared to cow’s milk and therefore provides less fat, proteins, and other important nutrients. Therefore, the nutritive value of horse milk is far less than that of milk from cows, buffalos, camels, sheep, goats, and even humans.

The Purpose of a Mare Is To Produce Healthy Foals, Not Produce Milk

Would you cook food in your brand new Mercedes? Of course not. That’s not its purpose. Likewise, horses were never intended or used solely as milk producers for human consumption.

High milk-producing dairy cows and goats have been developed through artificial selection, intentional breeding, and genetic modification. They were developed purposefully by humans to provide milk and meat. But human’s never intended for mares to provide milk for human consumption.

Although the horse milk industry is developing, it is still a fact that the most important purpose of a breeding mare is to produce a healthy, active, well-fed foal that will grow up to make a strong, powerful, and excellent horse. So milk production for human consumption definitely is secondary.

The Horse Population Is Smaller Than Cattle; Fewer Horses to Milk

The global population of horses comes to about 60 million. This is incredibly low when compared to the more than 900 million dairy cattle worldwide.

So the population of horses is not enough to produce milk for the human population and will never be adequate.

Despite the medicinal and dermatological benefits of equine milk, it is not as nutritious as the milk of cows, buffaloes, sheep, and even goats. The protein and fat content in equine (horse) milk is lower than the alternatives.

It would not be economically feasible to create commercially sold cheese and cream products for general use using horse milk. It would be incredibly expensive to do so.

The milk of cows, buffalos, sheep, and goats have the added benefit of people being used to their taste. So why choose a new, less nutritious, expensive-to-produce, and less available milk when cheap, more nutritious, and readily available milk is right on the grocery store shelf?

Let’s explore in more detail the reason why horse milk would not be an appropriate alternative to cow’s milk.

The average body weight of a mare is greater than that of a cow, so the nutritional requirements are more than cows.

Horses ingest more feed and produce less milk per body weight, making them more expensive to maintain and less productive overall. The reality is mares are a bad choice for milk production on a commercial scale.

The lactation period, meaning the time milk is available and secreted, is less than that of cattle in horses.

The average lactation length in mares is 180 days, far less than 305 days for dairy cattle.

Moreover, the milk yield in mares decreases dramatically after 2 months. So a very short lactation preceded by a long gestation period makes the process not economically feasible.

Frequent Milking Is Required for Mares

In horses, the milk yield at one milking is very low compared to cattle or goats. This is because there are two mammary glands in the mare’s udder, which is an evolutionary adaptation to accommodate their simpler stomach.

Their stomach differs from that of many ruminants in that it cannot store much. So a mare needs to be milked more than 4-5 times a day for optimum production, which is itself a laborious task.

Although it is not prohibited to drink horse milk in many religions of the world, many people believe it to be prohibited.

For example, despite the fact that horse milk and meat are halal (permissible) in Islam, millions of Muslims living in the Indian subcontinent do not drink equine milk and consider it prohibited. This makes equine milk more difficult to be accepted on a larger scale.

Milking a Mare Is Not Easy

A mare has two short mammary glands (teats). Although many milking machines and manual products are available commercially, few people buy them to milk horses.

Moreover, hand milking of mares produced less fat in the milk as compared to machine milking.

Horses Are Not as Docile as Cattle

Along with the fact that horses were domesticated 2000 years later than cattle or sheep, I share my personnel observation here.

The basic answer to why we don’t milk horses is that horses were not bred to be used for milk production. Humans modified generations of horses during the evolutionary process called selective breeding for a completely different purpose, with milk production a secondary consideration.