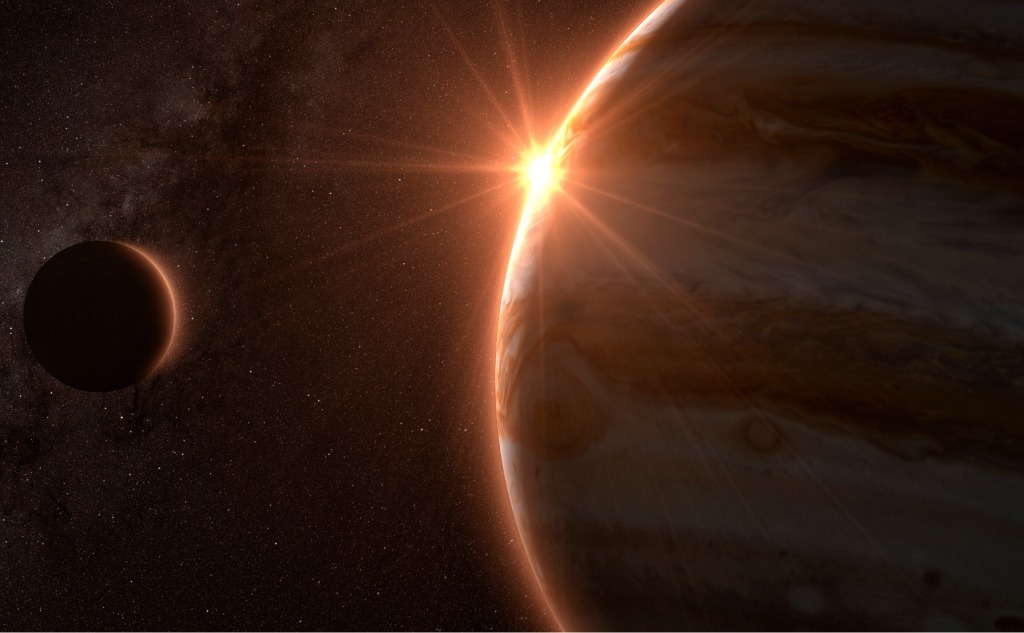 These are 10 fascinating facts about Jupiter.

That’s 300 times bigger than Earth all the way up to the most powerful electromagnetic field in the solar system.

So if you want to learn 10 fascinating facts about Jupiter, then this article is for you.

Jupiter is named after the king of the gods in Greek and Roman mythology.

Jupiter shrouded himself in a cloak of clouds to hide his mischief.

In fact, the only thing bigger in our solar system is the Sun.

As on of the naked eye planets, Jupiter shines bright and powerful in our night skies. It has been studied since the times of ancient human civilizations.

Without further ado, here are 10 fascinating facts about Jupiter!

It’s no secret that Jupiter is the biggest planet in our solar system. But it’s actually more than 300 times as massive as Earth.

Jupiter is 2.5 more massive than all other planets in our solar system combined.

The only thing bigger and more massive in the solar system is our Sun.

Jupiter may be gigantic, but it spins faster than any other planet. Kind of like an NFL lineman running a 4-second 40-yard-dash. It rotates at nearly 30,000 miles per hour.

Due to this speed, Jupiter’s day is only 10 hours long. This incredible speed even causes the regions around Jupiter’s equator to bulge out significantly.

Perhaps Jupiter’s most famous feature, the Great Red Spot, is a wild and gigantic storm.

The storm is big enough to fit three Earths in its diameter.

The Great Red Spot has been raging on for more than 350 years and shows little-to-no signs of slowing down any time soon.

#4 Jupiter Is the Fourth Brightest Object in Our Sky

Only the Moon, Sun, and Venus shine brighter from Earth.

In fact, Jupiter is so bright that its observational recordings date back to the 7th century BC, by ancient Babylonians. It is the second brightest of what we call the naked-eye planets.

Of Jupiter’s award-winning 67 known moons, Ganymede takes the prize for the biggest Moon.

#6 Jupiter Could Have Been a Star

Jupiter is similar to a star in that it is predominantly composed of hydrogen and helium. It’s also very massive, much like a typical star, but not quite enough.

If the planet were to grow around 70 times as large as it is now, nuclear fusion would occur.

If this growth were to happen magically and fusion kicked in, Jupiter would transform into a real star. That would cause quite a brutal situation for our solar system.

We would have two Suns.

Actually, it is one of four planets with ring systems (Saturn, Uranus, and Neptune).

However, the rings are quite faint and not something you could see through an amateur telescope.

Jupiter’s rings even have sections, just like the famous rings of Saturn that we have all seen and know.

#8 Jupiter Has Liquid Oceans Beneath Its Clouds

Though these are not the kind of oceans you would want to go swimming in, they are liquid hydrogen.

It obviously takes extreme conditions for elements like hydrogen to reach a liquid phase. Somewhere around -400º Fahrenheit, to be exact.

Plus, the oceans are surrounded by thousands of miles of gases.

Due to its gigantic size and gravity, Jupiter pulls in many things floating around the solar system.

Doing this has saved Earth from several comets and asteroids that otherwise would have hit us. This was particularly witnessed with the Shoemaker-Levy 9 comet in 1994.

Again, Jupiter has the solar system’s most powerful electromagnetic field because of its large size and extreme conditions.

In fact, if it were visible to us, Jupiter would appear to be as big as our Sun. For this reason, missions like NASA’s Juno spacecraft must travel very carefully and protect their equipment.