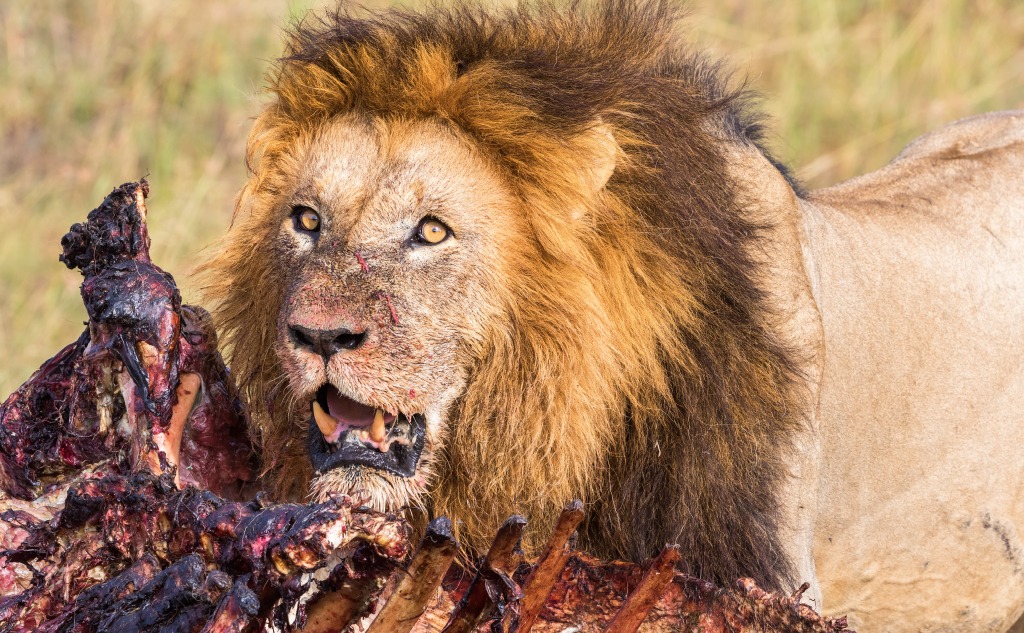 This is how long a lion can survive without food.

So if you want to know all the details about how long a lion can live without food, then this article is for you.

Food: A Basic Necessity of Life

One of the basic necessities of life is food. Food is a source of energy that is required for all day-to-day activities.

As a person or animal takes in food, it is digested by the body so that the digested material can be absorbed and utilize by the cells in the body.

Waste material is removed through a process called excretion.

Lion, the King of the Jungle: Current Situation

Lions (Panthera leo) are one among many big cat species of the world. A lion, being an apex predator, can consume many different types of prey animals.

Lions will try to attack any other living creature courageous enough to come in front of them. Many will also be eaten, but not all.

Although hunting lions is banned globally, illegal hunting and habitat destruction has reduced the world lion population to just 20,000.

The Asiatic lions are slightly smaller than the African lions, and some differences are also present in their life cycles. To avoid confusion, our discussion will focus mainly on African lions.

What Do Lions Eat?

The “kings of the jungle” have several animals at their disposal to eat. Even though their food options are quite diverse, they do prefer certain types of foods over others.

Although lions might hunt and kill the animals even when not hungry, usually, they won’t expend energy that way.

They want to use it to get their favorite foods instead, especially zebras.

How Much Can a Lion Eat?

The active lifestyle and royal habits require them to eat a lot. They can consume as much as 15% of their body weight in a single meal.

Captive lions eat less as compared to animals out in the wild.

Being obligate carnivores, meaning they can’t digest vegetation, these apex predators have to eat flesh to survive. Their social organization into prides gives them an additional advantage to hunt very large animals, such as elephants.

Hunting activities are usually done at dawn and dusk. Although lions prefer to stalk, sometimes they will also ambush prey. Commonly, a lion hunts about every 2-3 days.

In human stories, the kings go out hunting while the queens remain in the palaces. This is not the case with lions. Within the pride, the females that do most of the hunting because the highly prominent manes of the males make hiding very difficult.

Although the females will kill the prey, the Alpha male (the topmost male in the pride) is first served because of their primary role in protecting the pride from external threats.

Food Availability in the Wild

Nature is simple but ruthless. Food availability for a lion depends directly on its hunting success rate, which usually doesn’t exceed 30%. The success rate itself is dependent on various factors such as health, age, and the types of food available.

You may be amazed to know that the lions are poor hunters as compared to other big cats. They are slower when compared to most other big cats, especially the cheetah, which is the fastest cat. A lion’s top speed usually does not exceed 50 mph (80 kph).

What Happens If Prey Is Scarce?

Can you imagine a king succumbing to starvation? It’s hard to imagine, but it can happen to any creature.

A shortage of food may elicit the survival of the fittest response for most animal species. The older animals may be left to live on their own.

Such animals can’t hunt or forage for food, and no other animal may be willing to offer food. Such animals may become emaciated and will starve to death.

While this scenario may not play out within a pride of lions, since older animals usually died before they make it old age, it can happen. However, all lives within the pride are at risk if prey becomes scarce.

How Long Can a Baby Lion Live Without Food?

A newborn cub feeds many times a day. Cubs can survive at least a full day without being nursed by their mother. This ability is advantageous because a lioness has to deliver and raise the cubs outside of the pack for three months. She also has to go out on hunting trips.

The shortage of food does not threaten the survival of cubs for a short period of time. The greater threat is other predators such as hyenas.

Out in the wild, only 80% of the cubs are fortunate enough to reach their second birthday. In an overly large pride, the younger members have a greater chance of starvation in times of food shortages.

How Long Can Lions Go Without Drinking Water

Do the lions quench their thirst with the blood of prey? This is an interesting question. The reality is yes, in many cases, they do.

In contrast to humans, lions can survive an exceptionally long-time during the absence of drinkable water. This may seem amazing, but it is not so surprising when you consider that the bodies of their prey may consist of 50-95% water. Lions can get their required water by eating their prey.

Lions increase their chances of survival in severe water scarcity by avoiding direct sunlight and resting under the shade during the hot summer days. Like a pet cat, a lion can sleep as much as 20 hours each day. In times of severe water scarcity, the lions can survive up to 4 days without water.

How Many Days Can a Lion Live Without Food?

The answer to this question can be variable depending upon the availability of drinking water.

Lions have been observed living without food for up to one month when a water supply is available.

Are they doomed to starve?

The threat of starvation continuously haunts a lion throughout its life. If a male cub is fortunate enough to survive its early childhood, it is then forcefully expelled out of pride at around 2-3 years of age.

The young male lion has to survive against extreme odds until they can conquer a pride of their own.

After the conquest of their new pride, the lion may kill the male cubs of its predecessor to establish its preeminence. If all goes well, the new head of the pride can enjoy his powerful status for the next 3-5 years.

The tenure for this position of power is not very long. The entry of a lion into old age is brutal. A new and young lion may invade and defeat an aging king. Even if the life of a defeated lion is spared, a rare occurrence, he may still be subjected to a terrible death by starvation. So death through defeat is a better way to go.

What Happens When a Hungry Lion Achieves a Kill?

As you know well, only hunger can teach a person the importance of food. But, once a hungry lion gets a successful kill, its natural greed causes it to overeat.

They enter into a resting phase referred to as feline food coma after such an episode of gluttony. Such a lion may not leave its place for as many as three days even to quench its thirst.

Do Lions Ever Show a Passion For Mercy?

The ruthless battle for the throne hardly leaves any room for mercy. But, unfortunately, this is also true for human kings who can kill their siblings for the kingdom.

However, there are many fascinating exceptions to this rare event in the lion domain. In one report, it was noted that a group of males was moved by the starvation of the male they had themselves dethroned. In a rare show of chivalry and generosity, the conquerors allowed their defeated fellow to feed alongside themselves.

So, these marvelous creatures not only possess physical power, majesty and strength, they are also blessed with amazing adaptability to survive food and water scarcity.