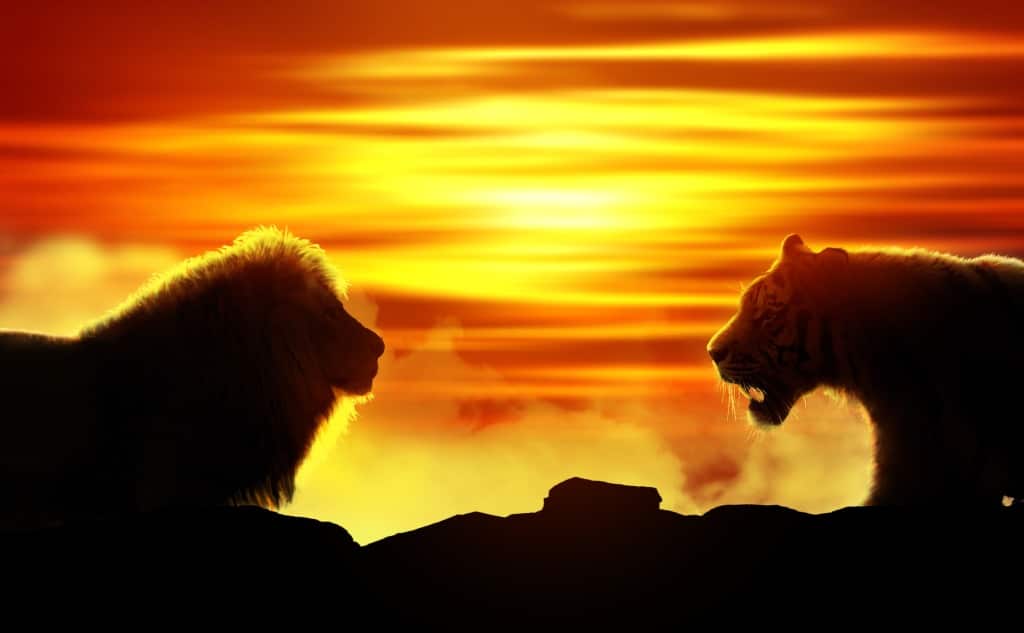 Here’s whether a lion or a tiger is more dangerous:

Lions tend to be lazy and won’t engage in a confrontation unless there’s a really good reason.

Tigers are more active, more muscled, and have more agility than the king of the jungle, the lion.

If you want to learn all about why tigers are more dangerous than lions, then this article is for you.

Is a Lion or a Tiger More Dangerous?

Tigers and lions are some of the most ferocious animal species.

There are significant differences in the fighting force between them.

Tigers are more active, more muscular, and have enhanced agility compared to the king of the jungle.

That’s what makes them superior in one-on-one combat.

Lions are rather lazy and won’t get into confrontation without a strong reason for that.

The naturally more aggressive tiger poses a greater danger to other animals and humans.

Lions fight as a group, so 3 or more males would have a significant advantage against a lone tiger.

Who Would Win in a Fight Between a Lion and a Tiger?

The outcome of a lion vs. tiger battle will depend on many individual factors.

Even if the scientific evidence suggests that tigers are stronger, you must also consider the animal’s age, breed, physiology, and fighting style.

All of us have been taught that the undisputed king of the jungle is the lion which probably suggests he is unmatched by any other contender.

That theory is wrong the same way the common belief that lions are living in the jungle is (lions inhabit plains and grasslands).

What Are the Fighting Advantages of Lions and Tigers?

Lions are fighters from birth.

They play many battle games while growing up with other small lions and spend most of their lives battling opponents that want to take over their pride (pride is a family of lions).

Solitary tigers have a major advantage in means of agility and flexibility.

They can climb trees and even swim in fast-flowing rivers where they catch tortoises and fish (occasionally an alligator).

With excellent eyesight, their victims are equally vulnerable during day or night.

Many experiments that involve individual comparison of behavior and strength in the different settings have been performed to answer the enigma of this big cat battle.

How About Those Ancient Cage Battles Between Lions and Tigers?

Today it’s unacceptable to abuse animals for human entertainment purposes, but in the past, tigers and lions were often pitted against each other in fighting arenas.

The Colosseum in ancient Rome was one of the places where lions engaged in fierce battles with tigers.

From what I have presented so far, it is no surprise that the usual victors were the tigers, but occasionally a lion would win.

Gunga was the name of a Bengal tiger owned by the Indian Emperor of Awadh.

Held in captivity in London, Gunga was often put to the test against lions and killed more than 30 of them.

It took only 10 minutes for him to finish the opponent.

From the more recent clashes, the incident at the Ankara Zoo in Turkey must be mentioned.

Finding a gap in the fence, a tiger went inside the lion’s den.

It took just one stroke, a single paw swipe for the tiger to severely damage the opponent’s jugular veins and kill him on the spot.

Who Is the Barbary Lion?

An Indian prince named Gaekwad organized a fight during the 19th century between a Barbary Lion and a Bengal Tiger, placing a sizeable bet of what is today 1 million dollars for the lion to win.

He lost a lot of money that day.

A rare individual was a famous Barbary lion named Juno.

He was put to the test with many tigers, and it is said that he killed as many as 13 opponents.

This species of lions are extinct nowadays.

They were larger than the African lions and had a dark mane.

Are Lions or Tigers More Dangerous to Humans?

That’s an average of 1800 tiger-attack deaths per year.

Most of these human-tiger conflicts that ended tragically happened in India and Southeast Asia.

Tigers have claimed more human lives than any other species of wild cats.

A tiger will decide to attack if the human sneaks in on him, when he is interrupted while eating or when a tigress wants to protect the cubs.

They can also mistake the human with some prey and attack.

Around 200 people are killed by lions annually.

Even when a lion goes for humans, it will take time for him to weigh the advantages and disadvantages of the action he is about to perform.

His highly developed predator-prey dynamics is what prevents him from attacking tourists in open vehicles.

The lion sees the vehicle as something too big to attack and too cheesy to be a threat, so the animal decides to lay low.

Are Lions or Tiger Man-Eaters?

Tigers can change their natural diet due to few reasons and become man-eaters.

Humans are easy prey, and incapacitated tigers that were previously injured may start hunting people.

Any type of injury/health problem that makes a tiger vulnerable can make him chase humans that can be easily overpowered.

Lions can become man-eaters for the same reason as tigers.

The most notorious pair of African lions was the reason for the man-slaughter in Tsavo, Kenya.

They terrorized the railroad construction workers and killed 35 of them.

However, one different thing is that some lions attack and eat humans to supplement their diet.

What Are the Physical Differences Between Lions and Tigers?

Tigers are the largest representatives of the feline family, and lions are the second largest.

A rough approximation is that tigers are 15-20% larger than lions.

The subspecies of tigers strongly differ in size, and the Siberian Tiger is considered to be the largest.

Considering the size, the perfect match for a lion would be the Bengal tiger.

In this evenly matched contest, you can expect both contenders to go past the initial rounds.

Even though a lion’s legs are short, they are all very strong, and along with the strong jaw and long canine teeth, they can easily kill any larger prey.

The males are around 30% larger than the females and weigh double, but the females do all of the hunting.

What Are the Attributes of the Lion’s Mane?

A very distinctive physical trait in male lions is the mane (the hair around their necks).

It’s sort of a protective barrier for the carotid artery and the neck vertebra not to be damaged when the lion is fighting.

Also, the mane is what makes lions look bigger and scarier in confrontations with other animals.

Fear is an important segment in animal fights since fearful individuals are more likely to run away.

Tigers don’t have manes, so they can suffer greater damage when bitten on the necks.

What Are the Lion’s and Tiger’s Coat Color Patterns?

Tigers like to camouflage themselves, and besides the elegance of motion, their rusty, reddish, and whitish stripes make sneaking even more successful.

The density and form of the stripes differ between individual tigers, but most of them have more than 100.

A lion’s coat is generally full-colored and without stripes.

There can be brown, reddish, and light variations, and the underpants are usually lighter than the rest of the body.

Their manes can be from blond to black.

The ability to camouflage themselves gives tigers a hunting advantage, so they are way more dangerous to prey because they can become practically invisible.

A group of lions frying on the open sandy fields is a clear mark for any prey not approaching anywhere near.

What Are the Speed and Endurance of Lions and Tigers?

Tigers are fast fighters, but that takes a toll on their stamina.

It’s natural for them to launch powerful attacks and go all in.

In just a few minutes, their bodies become tired, so they may walk away for a brief period before returning to the fight.

Lions are a lot more endurable and don’t waste themselves off immediately.

They take their time and measure their opponent’s strength by striking a paw duel first.

This step-by-step approach and high endurance can be winning factors for a resilient lion that can withstand the first few tiger attacks.

It may shock you, but lions are faster than tigers.

Tigers can only keep their maximum speed over short bursts.

What Are the Bite Forces of Lions and Tigers?

The bite force of different living beings is expressed in psi (pound per square inch).

Psi is the pounds of force a certain object is applying on a square inch of surface.

A lion’s bite is about 100 psi weaker than the bite of the strongest dog, the Anatolian Kangal.

Neither lions nor tigers have the strongest bite among the feline family.

The tiger has an unbelievable bite force of 1100 psi.

They bite almost as twice as hard as lions do.

Surprisingly the wild cat with the greatest bite force is the jaguar.

This animal is not only super fast but also bites with mighty 1350 psi force.

Both lions and tigers have around 30 teeth.

A tiger has longer pairs of fangs that are 4 inches (10.1 cm) long and inflict really deep wounds on opponents.

With 3 inches (7.6 cm) of fang length, the lion is also a deep biter but still not as dangerous as the tiger.

How About the Intelligence and Brain Size of a Lion and a Tiger?

According to scientific data, tigers have larger brains than lions do.

The Asian lion has a smaller brain than the sub-Saharan lion and there are also differences in brain size between different sub-species of tigers.

The brain size doesn’t appear to affect the intelligence of the animals in this case.

Big cats held in captivity have smaller brains than the ones living in the wild so the living conditions of the animal are the determining factor of the size of the brain.

Scientists like to believe that lions are indeed the smartest of all felines.

The fact that they live in complex social groups and have a high level of social intelligence probably makes their cognitive complexity better than the tigers.

Do Lions and Tigers Meet in Nature?

It’s very unlikely for lions and tigers to cross each-others paths in nature, but there are places in India where this can happen.

Since the two species of animals inhabit different geographical regions, the chances of meeting are low.

In the past, there was a project lead by the Prince of India to relocate a certain population of African lions to a tiger sanctuary in India.

The project failed because some of the lion cubs died during transportation, and the ones that survived were found dead after some time.

Most historians suspect that the tigers in the sanctuary killed their feline competitors or that people turned on the lions to protect themselves.

Fights between lions and tigers had happened in front of people’s eyes when the two cats met in captivity.

Do Lion and Tiger Cross-Species Exist?

A cross between a female tiger and a male lion is called a liger.

This is not a recognized species because it’s a man-made animal.

A tiger and a lion can never breed in nature.

Ligers are, however, the biggest cats because they get the most from both parents.

Just like the tiger, a liger can swim and climb trees and is a very social animal at the same time.