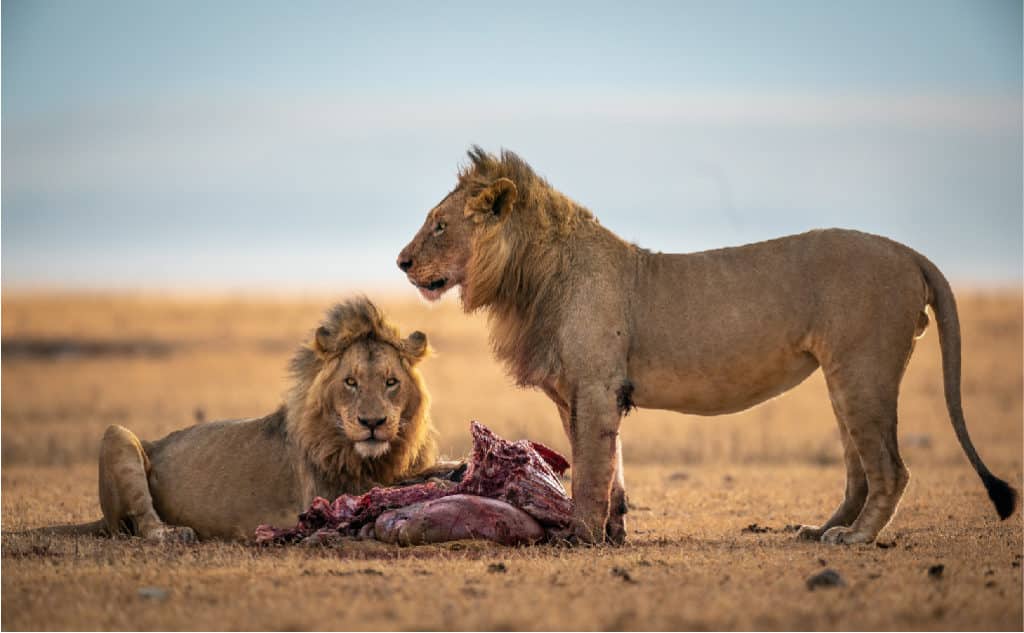 This is whether lions eat alligators and crocodiles.

Lions, alligators, and crocodiles are built to hunt.

So if you want to know whether lions eat alligators and crocodiles, then you’re in the right place.

Lions, Alligators, and Crocodiles – Who Eats Whom?

Before we answer the question above, let’s ask a related question:

Do humans eat Alligators or Crocodiles?

They do. In countries like Cambodia, the Philippines, India, and Kenya, for example, people eat crocodile meat along with meat from other reptiles such as snakes and lizards.

Similarly, alligator and crocodile meat is commercially sold at restaurants in different parts of the United States, especially in Florida.

At least this confirms that crocodile meat can be eaten and dispels a general misperception that crocodiles have poisonous bile and therefore can’t be eaten. They are perfectly edible.

A lion is the king of the jungle and is an apex predator. They can prey upon and eat any animal they choose.

So lions can hunt crocodiles and sometimes eat them. But most of the time, they avoid them because they are great predators, too. So clashes between these two apex species are never pretty.

The details are as follows:

Comparisons Between Crocodiles and Alligators

Let us discuss some of the comparative characteristics of crocodiles and alligators.

Crocodiles also have good color and night vision, a well-developed sense of smell capable of sensing in water and on land, good hearing, and sensory pits on their upper and lower jaws.

They have the strongest bite among all animals and the most acidic stomach among all vertebrates. In addition, they swallow stones to crush the food to help digest it almost immediately after ingestion. These characteristics make them excellent hunters and extremely dangerous to almost every creature.

Alligators are comparatively smaller than their cousins, the crocodile. There are two types of alligators. The larger one is the American alligator measuring at 3.2-4.4 yds. (3-4 m.). The smaller one is the Chinese alligator that is approximately 1.6-2.2 yds. (1.5-2 m.) long.

They also have a few characteristics that differ from their cousins. These include:

Do Lions Eat Alligators or Crocodiles?

Lions have been observed hunting and eating crocodiles, even if other prey species are available. Here are some reasons for that.

Crocodiles are ectothermic animals, meaning that they maintain their temperature by absorbing the heat from their environment. That is why you often see crocodiles basking in the sunshine. However, this takes some time to do this because it raises their temperature gradually.

It’s sort of like putting air in one’s bike tires. During their recharging time, a crocodile has low metabolism and might move slower than normal.

Lions are not good at running for long distances chasing their prey, so a sunbathing crocodile might seem to be an attractive dinner.

So, how might a group of female lions attack alligators or crocodiles?

Lions hunt in groups and use a coordinated team effort to make it easier to dodge and bite a crocodile that is not expecting an attack.

One lioness might distract it by attacking the tail from the back, and another partner then goes in and bites the throat of a crocodile, strangling it to death.

Even though lions are apex predators, the king of the jungle can be attacked by many other animals. The crocodile is third on a list of animals that can attack lions.

Most successful attacks on lions by crocodiles happen in the water, where they can maneuver very fast. Crocs are powerful swimmers. Lions are most vulnerable to attack while drinking water or crossing streams.

In retaliation or defense, lions can attack a crocodile that comes onto land during a fight.

Although crocodiles can’t move as fast on land, they can move quickly in short bursts. So, if the fight is initiate by a crocodile, it can result in death for one of the lions.

Why are Crocodiles Less Mobile Out of the Water

Because of their heavy size and long length, crocodiles have less maneuverability on land.

Despite the advantage of a strong muscular tail that plays an important role while attacking prey, especially in the water, the long tail can sometimes become a disadvantage on land. However, outside the water, the lion has a clear advantage over the crocodile.

Based upon the above discussion, it is clear that lions can hunt, attack, and even eat crocodiles, but they are definitely not a lion’s preference. Generally, lions avoid crocodiles. They don’t attack crocodiles unless it is absolutely necessary or in a situation where it would be easy to do.

Crocodiles and Alligators Are Predators Too

Crocodiles are also at the top of the food chain. They are excellent hunters when taking on birds, small mammals, other amphibians, crustaceans, and even other crocodiles. This means that they attack and eat almost everything with muscles and therefore are meat.

Though lions have an advantage over crocodiles on land and vice versa in water, it is never easy for predators to take on another predator. Therefore, both lions and crocodiles are carnivores and predators.

Crocodiles are ambush hunters and have strong jaws that bite with a force of 22000N (Newtons) or 4,946 pounds of force.

They have thick skin with bony particles and scales, almost like armor.

They kill their prey by drowning it in the water where even the strongest psychological weapon of lions, the roar of a lion, is of no use.

Crocodiles have good night vision and can see colors well, unlike lions, which helps them find prey species such as antelopes, deer, and other animals.

Crocodiles have a transparent membrane over the surface of their eye called a nictitating membrane that protects against damage and provides some vision underwater.

Lion and Crocodiles Have Different Habitats

The crocodiles live near water bodies such as lakes, rivers, and streams. Although they are less dependent on the water when compared to other amphibians, they do not venture far from bodies of water.

On the other hand, lions are widespread in wide ranges of grasslands and savannas. They only come to the water for drinking, crossing streams, and eating dead carcasses by the streams.

It is at waterways where the two species might come in contact with each other, leading to potential conflict. But, on the other hand, prey species preferred by lions are also easily available near water. So why come to a stream to eat while potentially risking one’s life since food is available somewhere else?

That question is easy to answer. Where prey is plentiful, predators will go there. So hunting is a risky business no matter where it happens.

The skin of crocodiles is very thick, tough, and heavily supplied with scales and bony particles.

Although this thick cover is not akin to tank armor, it does provide good protection. In addition, it can be a deterrent to other predators.