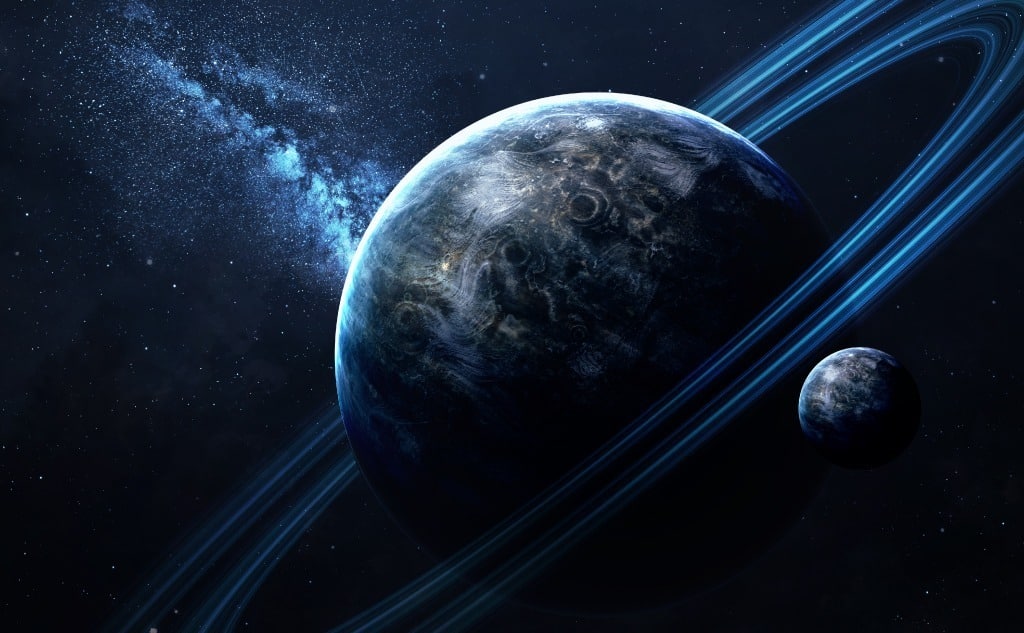 This is about how it would be to live on the planet Uranus.

How about storms of shimmering diamonds rain down on your house?

So if you want to know how life on Uranus might be, this article is for you.

What Would It Be Like To Live on Uranus?

So, you have selected Uranus as your new home?

Well, before you pack up and voyage to the planet, there are many essential things you need to know.

Mysterious and gigantic, Uranus sits far from the Sun as a frozen ball of deadly gases.

Of course, living in such environments would require tremendously advanced technology.

But, let’s put that thought aside, blast off to the outer solar system, and find out what living on Uranus would be like.

Similar to the other gas giants we have explored so far, Uranus has no solid surface.

Instead, ammonia, methane, and water ices comprise most of Uranus.

Plus, the planet’s surface layers are extremely frigid.

Internal temperatures on Uranus can rocket to a brutal 8,500º F.

Therefore, living on Uranus will be limited to the outer cloud top layers.

Living in the outer cloud layers in a protective bubble-like home will work best.

Saturn and Jupiter both received this same advice.

Your Typical Day on Uranus

Entirely flipped on its side, Uranus sits at a near-90º tilt.

Only once you observed other planets would you notice this awkward shift.

Studied for decades, the cause of your new planet’s tilt is still a mystery.

Scientists believe it is the result of a massive cosmic collision.

Plus, Moons form after planets form. We know this now.

So, your Moons orbiting on the same tilted plane tells us the collision occurred during the early solar system when your planet was forming.

Next, the moment you arrive on the third biggest planet, you immediately notice the temperature.

Maintaining a constant chilling -320º F, the sub-arctic climate on Uranus is hard to ignore. The further a planet is from the Sun, the colder its temperatures.

Yet, Uranus is colder than the more distant neighbor, Neptune. How can this be?

Crediting icy temperatures to unknown internal processes, your new planet is the coldest in the solar system.

So, putting on the best parka money can buy, you decide to head out and explore.

Similar to Earth, your new day lasts for 17 hours, not too shabby.

Plus, to your surprise, you notice blue skies, just like home sweet home.

Yet, blue skies on Uranus differ dramatically from Earth.

Deadly abundances of methane gas are now the cause of your world’s blue skies.

To your dismay, your new home appears bleak and desolate.

Venturing out to explore, vacant, smooth, blue horizons surround you as far as the eye can see.

Living on Uranus is not conducive to sightseeing.

However, at 100,000 miles around, your home is the third largest planet and much too big to explore anyhow.

Your Typical Night on Uranus

Living on Uranus does have its perks, despite the barren landscape. Peering through the gaseous haze, you become awe-inspired by 27 Moons.

Small and irregularly shaped, your collection of Moons are much different than your previous Earth-Moon.

Yet, they dance around your planet like mesmerizing ice sculptures.

Surprisingly, your new world has a ring system. Faint and elegant, Uranus is surrounded by 13 beautiful rings.

Yet, appearing faint deep blue, and red, your new rings are simply stunning.

Finally, Earth is observable from your new home, should you become homesick.

Of course, viewing your former home requires a powerful telescope.

Appearing as a pale dot, you gaze beyond the methane atmosphere at your prior homeland.

Now, temperatures become simply too much, and you head inside for the evening.

Your Typical Year on Uranus

Opposite of your short days, living on Uranus brings 31,000-day-long years.

In other words, your new year lasts for 84 Earth years.

Not to mention, your extreme tilt creates enduring, long seasons.

In fact, only two seasons occur on Uranus, summer, and winter. First, extreme tilting causes your north pole to face the Sun for half of your year.

In other words, summer drags on slowly, seeing the Sun creep across the sky for 42 years.

Finally, skipping what would have been your NFL season, winter instantly sets in. But, unlike Earth’s winter, Uranus now sits in total darkness for 42 years.

Hope you do not like football, autumn leaves, or warm days.

Plus, in your terribly long year, your first birthday has not yet occurred. Your friends will be feeding you a birthday cake with a single candle in your highchair in no time.

But, when birthday party invitees are no-shows, don’t hold it against them. After all, their cancellation text messages take nearly three hours to arrive.

Weather forecasts living on Uranus are predictable and bleak.

Cold, dark, and windy, that’s about it.

Blowing at a speedy 560 miles per hour, gusts of wind are sure to knock you down.

Heavy boots of iron could do the trick.

Between day and night, temperatures remain a constant -320º.

Nearly 2 billion from the Sun, very little light hits your home, even during the 42 year summers.

Murky methane and ammonia atmospheres certainly do not help this.

Precipitation does occur since you still have an atmosphere, but much differently.

Methane in your world chemically changes to carbon.

Under your planet’s extreme pressures, this carbon often becomes diamond.

Storms of shimmering diamonds now rain down on your house.

Finding ways to distribute the valuable gems back to Earth could make you the wealthiest person alive.

Of course, you will want to check currency exchange rates.

However, being the first person living on Uranus, it is you who invents money. Score.

Do you find yourself longing for more bling?

Have you often said, “I wish this summer would last another 41 years?”

Would you enjoy sleeping nude outdoors on a winter’s night, with a powerful fan blowing on you?

Don’t mind being the butt (literally) of jokes throughout the solar system?

Then, living on Uranus might be the ideal situation for you.

However, keep in mind that your car’s gasoline and evening glass of wine would both freeze and crystalize instantly.

Plus, the drive back to Earth to visit friends at highway speeds will take around 43 million hours. Something to consider.