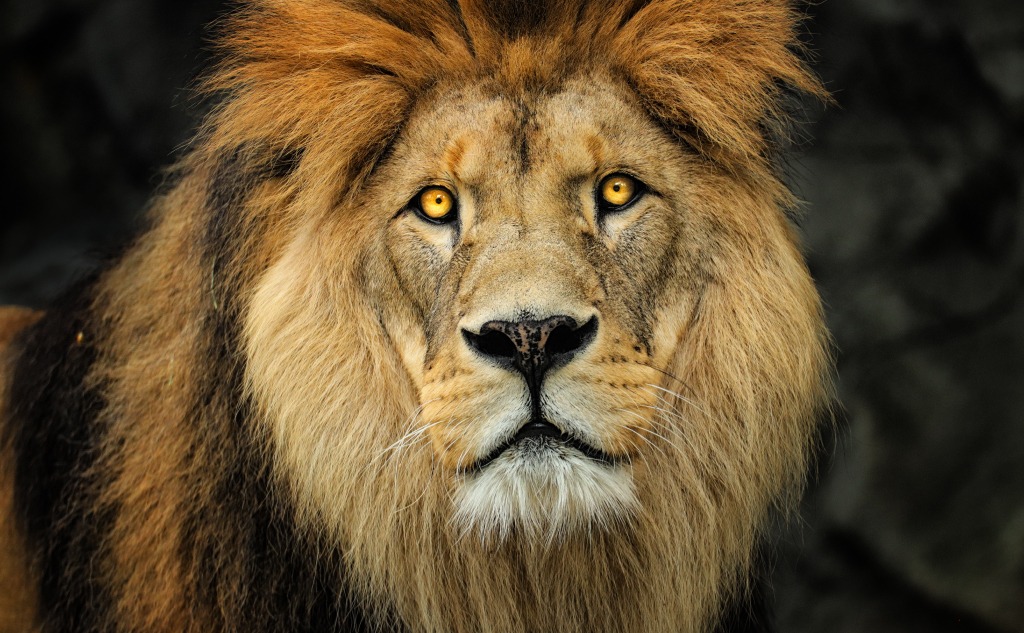 This is why you shouldn’t stare at the eyes of a lion.

Do you like when people stare at you? This is how lions feel.

So if you want to learn all the details about why you shouldn’t stare at a lion, then you’re in the right place.

Have you ever dreams of going head-to-head with a lion?

Are you a hunter desperate for a lion trophy?

Are do you want to do what members of the African Maasai tribe used to do? They used to kill the lion for its mane and tail, not for the meat.

If any of the above fascinates you or you happen to be a tourist or nature lover, you will want to know what you should do if you face a lion. Therefore, this article will be of great interest to you.

There is a famous military saying that states:

“If you know the strengths and weaknesses of your enemy, you have already won the battle.”

So before we get into a deep discussion about what you should do if faced with a lion, it is important to know how a lion might behave.

According to research studies, it is a fact that lions, along with other wild animals, have an instinctive fear of humans. What this means is they are naturally wary of humans.

They know that humans are hunters, and many have seen what humans can do to other animals. So they fear the human voice, smell, and other indicators that might tell them a human is near.

There is another study claiming that adult lions have a fear of humans, not their cubs. This is because the cubs haven’t learned to be afraid yet. But, that doesn’t mean you should approach them, as you will see.

Lions Are the Least Afraid Among All Cats

Although lions have an instinctive wariness of humans, it doesn’t mean that they will start screaming in fear and run away upon seeing you. Instead, they will just avoid you if at all possible.

But if you are continuously bothering them, breaching their territory, or being extremely hungry, then be ready to be attacked and possibly become their dinner.

If You Have a Sudden Encounter With a Lion

A person who sees a lion and doesn’t move away is truly a fool. Yet, when you face a lion, you will see it near you most of the time.

Lion’s heart is rather small and inefficient, so they cannot run for a long period of time. So they sneak up on their prey.

They are the perfect stalkers, lean-to-earth, almost hidden within waving grasses. They put themselves into a perfect position to camouflage themselves.

If a lion has come to hunt you, then you will surely be attacked without much warning.

Some Lions Will Attempt a Mock Attack

Unlike other big cats such as the jaguar, tiger, leopard, and so forth, lions are famous for attempting 2 or 3 pseudo-attacks.

What this means if they make some false attacks on their prey before launching the actual one. Most likely, they do this to feel out their quarry to determine the best approach.

Lions Will Try To Avoid Confrontation With Humans

According to wildlife experts, a lion will try its best not to confront humans. However, if they feel threatened, they may become aggressive.

In other words, you need to do something that provokes them. Otherwise, they will do their best to avoid you.

Your Chances of Survival Are Slim

Although there have been incidences where people have managed to kill the lion that attacked them, that kind of outcome is rare.

However, if you are not well armed or don’t belong to the Maasai tribe and know how to deal with lions, you have only a tiny chance of survival. So don’t go into battle against them.

Running Away From a Lion Is Not an Option

The most common response of humans to any sudden threat is to run away from it. But, unfortunately, this doesn’t work in the case of lions.

Don’t even think about running away from a lion. They can run faster than you. Your job is to slowly retreat.

When Not to Look Into a Lion’s Eyes

Lions are not our enemies. They will not attack us unless:

Don’t Stare at Lions, Even From a Distance

Think about it. Do you like people staring at you? It’s annoying, isn’t it? That’s just how the lions feel.

Even with full tummies and half-closed eyes, they are still monitoring their territory.

When you suddenly appear and stare at them as if you claim that territory, it will surely annoy them, and they might decide to chase you away or attack.

Don’t Stare at Lions When They Are With Their Cubs

Humans don’t like their family time interrupted, so why would you think lions would enjoy being disturbed by you. Their job is to protect their family.

So, if you bother them, they may bother you to protect their babies.

Don’t Stare at Lions When They Are Breeding

In the animal world, breeding time, by its very nature, is a time of aggression and demonstrations of power. They are already pretty stoked up and eager for a fight, so don’t do something stupid and provoke them.

Just avoid it. Just walk away or retreat slowly, so you don’t ruin their version of romance.

Don’t Stare at Lions When It Is Staring Back

It is the habit of cats to focus on everything coming into their frame of reference. They try to figure out whether it is prey, a threat, or just a visitor.

They are curious and will investigate everything. If you attract too much attention, they might come over to inspect you more thoroughly, and it probably will not be a friendly visit.

So the bottom line is to use your common sense and stay at a safe distance away.

Do whatever you can to make sure you don’t attract unwanted attention.

In other words, admire them from afar and be respectful. They will respect you right back.