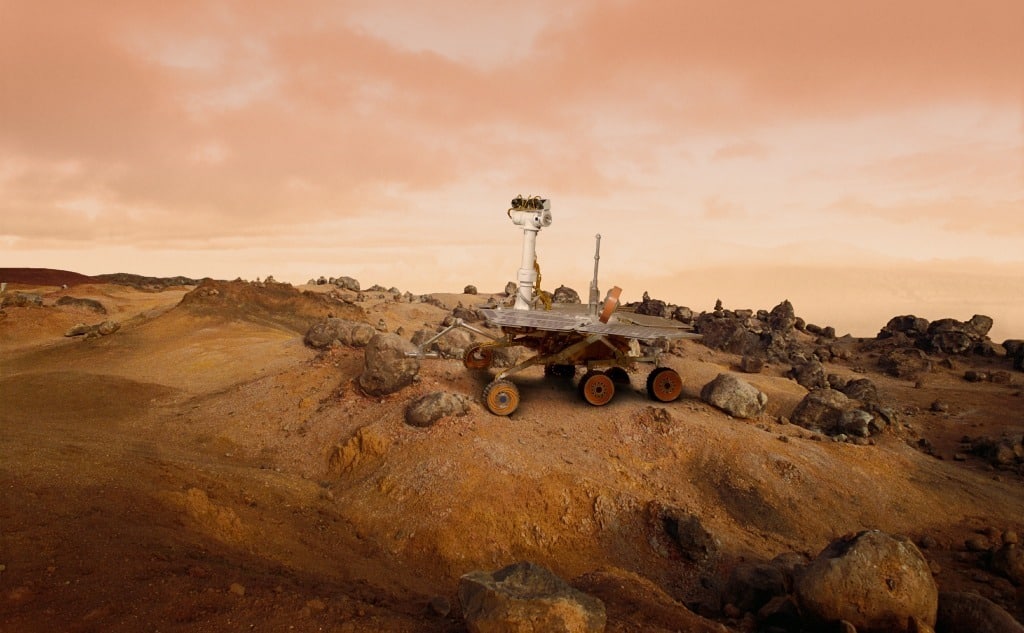 These are 10 fascinating facts about Mars.

From the tallest mountain in our solar system to applying for a one-way ticket.

So if you want to know 10 fascinating facts about mars and maybe make it your new home, then you’re in the right place.

Mars is one of Earth’s closest neighbors. It’s also the focus of mankind’s likely next journey into space.

But, don’t be deceived. Even being right next door, we know very little about this mysterious little red planet.

Humans have studied Mars for centuries, and it is one of the few naked-eye planets.

So, enjoy these 10 amazing facts about Mars:

#1 Mars Used to Have Water

Astronomers have searched for the presence of water on Mars for centuries.

Water plays a key role in determining whether life could have existed on Mars in the past.

More recent studies and remote explorations show canals carved in Mars’ terrain that could have only been created by water flow.

Determining the presence of water is important to scientists simply because it’s a “must have” in the search for life beyond Earth.

#2 Winner: Tallest Mountain in Our Solar System (on a Planet)

One of the red planet’s most infamous features is a former volcano, Olympus Mons.

It also takes the medal for the tallest mountain in our solar system, towering at 13.7 miles high.

We have heard of 14ers or seen pictures of the legendary Mount Everest.

Olympus Mons dwarf these structures, reaching over 70,000 feet into the Martian skies.

In other words, you could stack Mount Everest 2.5 times and still not reach as high as Olympus Mons.

Or, you could stack the largest U.S. mountain, Denali, three times and still have 12,000 feet to spare.

Even though Olympus Mons is billions of years old, its Laval flow evidence indicates it may still be active.

#3 Pieces of Mars Can Be Found on Earth

Mars, like several inner planets (including Earth), was pummeled by asteroids in its past.

As asteroids hit Mars, debris from its surface escape gravity and go shooting out into space.

As this rogue debris floats around the solar system, some of it is trapped by Earth’s gravity and lands on our planet.

NASA has shown that Mars rocks found on Earth are practically identical in composition to surface samples obtained by their Viking Landers in previous decades.

Since Mars is tilted on its axis, it goes through seasons, similar to Earth.

However, Martian seasons last twice as long and feel much more extreme than ours.

Though the overall temperature is more frigid than Earth (average of -85º F), it can jump quickly.

Mars has a little-to-no atmosphere, so heat and cold are not easily trapped, allowing the temperature to rapidly change.

Mars is the only planet besides Earth to show ice caps on its poles.

The planet was first observed through a telescope by Galileo Galilei in 1610.

By the end of the century, Mars’ polar ice caps were discovered. This ice has been a significant factor in searching for past, present, or potential future life on the Red Planet.

#6 Named after the Roman god of war, Mars

The name comes from the planet’s reddish hue, caused by large amounts of iron oxide (rust) on Mars’ surface. This is also what gives it the more informal name, the Red Planet.

#7 Mars Will Have a Ring in the Future

The moons are slowly orbiting closer and closer to the Martian surface.

Eventually (millions of years from now), one of them will collide with Mars, and most of its debris will fly out into orbit around the planet.

The result will be a tiny, thin ring.

Whether it’s caused by Matt Damon, or something else, thousands of people want a one-way ticket to Mars in 2022.

The Mars One project hopes to colonize the Red Planet, beginning in 2022.

Application fees range from $15 to $40, depending on which country you reside in.

However, very little of the mission seems to be successfully orchestrated as of now.

Perhaps it will not happen, and the Mars One organization will pocket millions of dollars?

#9 Mars Is Entirely Populated by Robots

There IS life on Mars. But, it’s exclusively robotic life currently.

And, there are three surface vehicles, mainly investigating the planet’s surface composition and terrain.

#10 A Robot Sang Happy Birthday to Itself on Mars

We end our 10 amazing facts about Mars with a bitter-sweet fact:

On its one-year anniversary of landing on Mars, NASA’s Curiosity Rover “sang” happy birthday to itself.

The equipment that analyses samples vibrates at various frequencies to move surface dust.

But, NASA temporarily tweaked them to perform a happy-birthday-like melody.

What a lonely birthday is singing to itself, over 200 million miles from home.