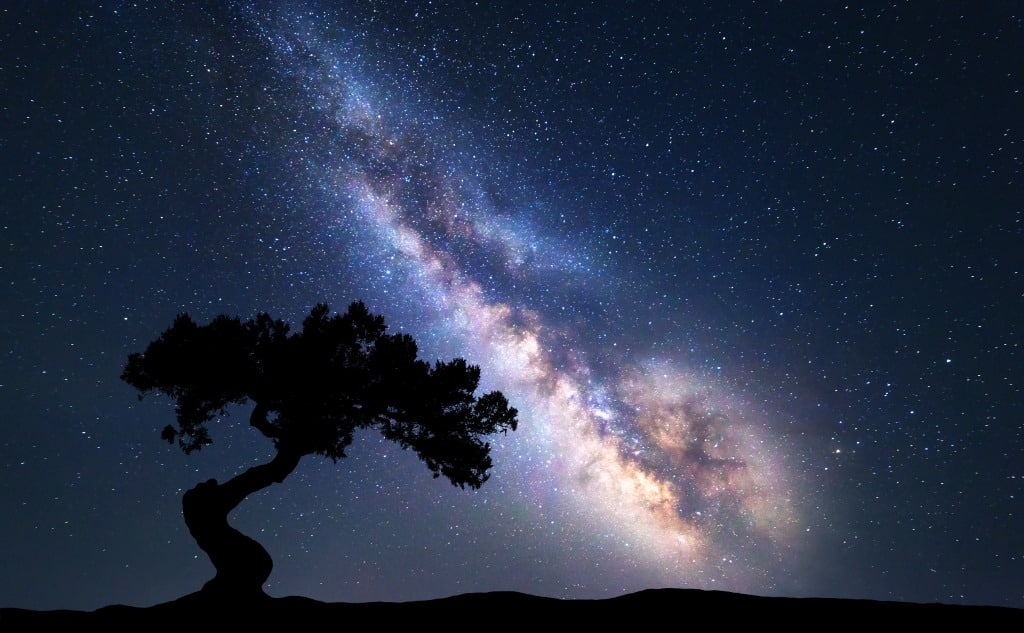 This is about how big the milky way is.

However, if you want to understand the milky way’s size and distances in a human comprehendible format, then you’re in the right place.

Indeed, our universe is truly gigantic.

But, even small parts of our universe are still absolutely vast.

In fact, even our home galaxy proves truly mind-boggling when it comes to distance.

So, just how vast is our native galaxy?

We break it down with Milky Way distances on scales that even we tiny humans can understand.

What is a Light-Year?

As we explore the amazing Milky Way distances in this article, it’s helpful to understand the speed of light.

Simply put, light is the fastest thing in our universe, our cosmic speed limit. So, how fast is that?

Without anything in its way, light travels at a staggering 186,000 miles per second.

In other words, light can travel all the way around planet Earth seven times in a single second.

Compared to Our Solar System

Previously, we explained our solar system distances in human-friendly terms.

But, our solar system is a mere blip or pixel of our entire galaxy, the Milky Way.

In fact, over 500 solar systems have been discovered in our Milky Way.

Not to mention, our Milky Way is simply one of at least 100 billion galaxies in our observable universe.

But what does that mean for our galaxy’s size?

Simply put, our solar system is a speck compared to the Milky Way.

Our Milky Way galaxy is a whopping 587 trillion light-years across.

In other words, you could travel across our entire solar system 53,000 times and still not equal one trip across the Milky Way.

Even NASA’s New Horizons, known for its ground-breaking 2015 Pluto flyby, currently holds the spacecraft speed record at 36,000 miles per hour.

Put another way, that is the time since the Bible was written, multiplied by 930.

Next, how does our life-bearing home planet, Earth, compare to the Milky Way.

After all, Earth is just one of at least 100 billion planets thought to exist in our galaxy.

Plus, Earth’s size is, at best, very average and quite unimpressive.

But, you would have to line up nearly 75 billion Earths to stretch across the Milky Way galaxy.

Plus, at 24,000 miles around, it would take more than 24 billion trips around planet Earth to equal one cross-Milky-Way trip.

Even the United States of America, at 2,600 miles across, feels truly large to us.

Still, 220 billion trips across the USA would not quite equal one journey across our Milky Way.

But, it takes almost 107 trillion Everest climbs to equal one Milky Way voyage.

Last but not least, we seven billion people are the only life, as we know it, in our entire universe.

No other planet is known to contain animals, spacecraft, technology, insects, or anything else.

So, how big is the Milky Way compared to humans?

We all know bullets travel fast. In fact, they are capable of around 1,700 miles per hour.

However, even these lightning speeds are a mere 0.0001 percent of light speed. Therefore, a bullet would take nearly 40,000 years to travel across our Milky Way.

Therefore, a sound wave would take nearly 88 million years to journey across our galaxy.

Currently, The Koenigsegg Agera R holds the record for the fastest automobile at 273 miles per hour.

But, the Agera R, constantly traveling at top speeds, would take almost 90 billion days to cross our galaxy.

Now, at 105 miles per hour, man’s fastest baseball pitch would take over 230 billion days to float across the Milky Way. Strike!

Even the fastest known animal, the cheetah, bolting at an impressive 61 miles per hour would take a billion years to span our home galaxy. In other words, that’s 400 billion hours or 9.6 trillion hours.

Finally, those truly ambitious aspiring astronauts could choose to walk across the Milky Way.

However, be forewarned that your journey would last for nearly 190 quadrillion hours. Indeed, that is “190,” followed by 12 zeros.

Otherwise, your trip would require over 2.6 trillion human lifespans.