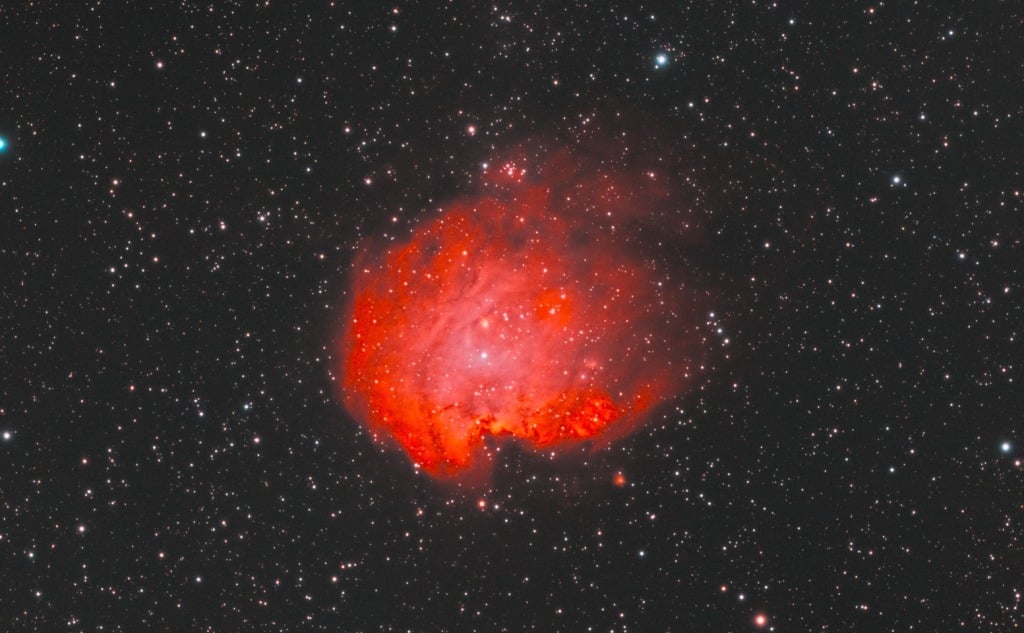 This is about the Monkey Head Nebula.

So if you want to learn more about the Monkey Head Nebula, then this article is for you.

The Monkey Head Nebula (NGC 2174) is a beautiful sight, no doubt.

However, it is a violent nursery where hot new stars are born.

Star creation uses hydrogen as the primary ingredient. And, because of this, the Monkey Head Nebula is an ideal place for the cosmos to create new children.

In fact, it is these dark clouds that were the very birthplace of the new stars.

Now, as the stars spring to life, they begin pushing their nurseries away and grow to be big and hot.

Where is the Monkey Head Nebula?

Sitting deep in the Orion constellation, the Monkey Head is around 6,400 light-years away.

In other words, it is 37 quadrillion miles from Earth.

Some people consider this nebula to actually be part of a nearby star cluster (NGC 2175).

Can I See the Monkey Head Nebula?

NGC 2174 can be seen through some telescopes. However, spotting this object requires a keen eye and special equipment.

Not to mention, this equipment can become quite expensive.

Seeing wavelengths and frequencies of ionized hydrogen atoms requires special telescopes and filters because they are not part of the visible light spectrum.

Basically, our human eyes are not powerful enough to see them. However, advanced amateur astronomers and professionals will find these items well-worth their costs for all of the new visual doors they unlock.

Now, when viewing nebulas, expectations and patience are very important.

For instance, the banner image for this article was taken by Hubble Space Telescope to celebrate its 24th launch anniversary.

Dozens of brilliant scientists work full-time to operate this type of equipment.

Not to mentioned, NASA spent a whopping $2 billion to make it a reality.