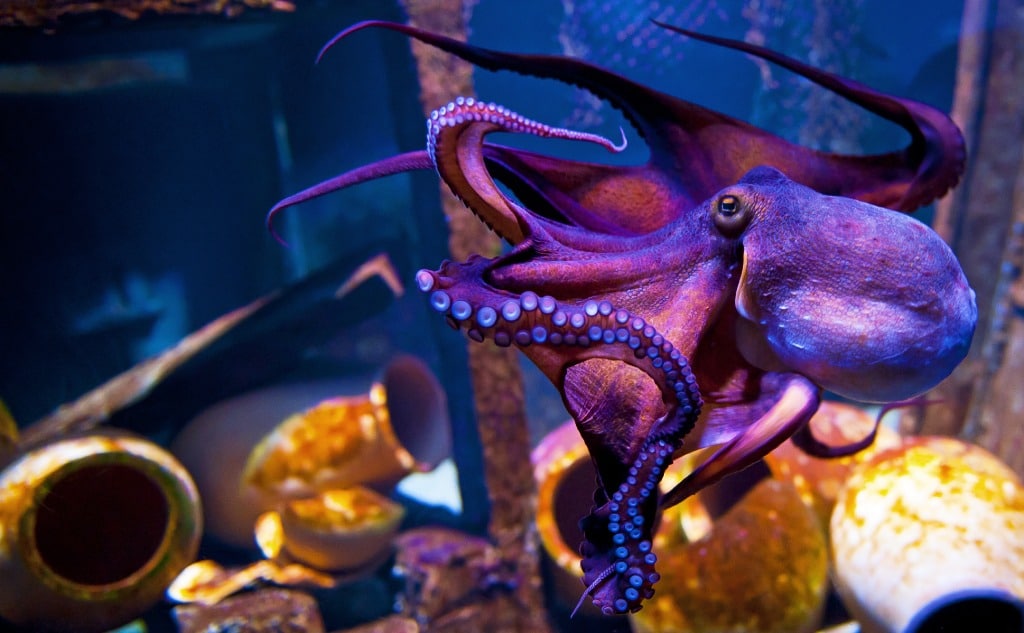 They make homes and shelters from shells and other objects they find. They built supportive structures around these shelters called gardens.

These gardens aren’t meant to be beautiful exteriors around their homes. Their sole purpose is to reinforce the home, not to make it look better.

So if you want to learn all about octopuses building gardens, then this article is for you.

The gardens aren’t meant to provide a beautiful exterior around their dens. Their sole purpose is to reinforce the home, not to make it more appealing.

Building and maintaining dens is a complex behavior in octopuses. It’s not just a simple reflex.

Every octopus does the action individually. There is no collective action or teamwork involved in choosing a place for the den, digging a den, and making a garden.

Although a solitary act, there are places that are kind of like octopus communities where the animals build separate housing. Each unit is only 8–12 inches (20–30 centimeters) apart.

Are Octopuses Intentionally Reinforcing Their Homes With Shells?

Octopuses don’t intend to make their homes more secure when bringing shells to their dens. They bring scallops home to eat and, in doing so, leave shells behind. So, the hard parts that make the gardens are just waste.

An octopus considers eating at home to be a lot safer than eating anywhere else. When eating out in the open, the animal risks being noticed by predators.

Many octopus species show the same behavior and have piles of prey-remains just outside their dens. The piles indicate to scientists where an octopus den can be located. Scientists also get information on their choices of prey according to the types of shells.

The dens are holes surrounded by shells or other objects. Sometimes these vertical shafts can be 16 inches (40 centimeters) deep. It’s not possible to have a stable shelter with that depth in the soft seabed, so the hard walls increase the quality.

The octopus, however, must not spend a lot of time outside its home searching for food. Excessive time away leaves the den free to be occupied by another octopus.

So, bringing the food home is intentional behavior. The octopus wants to eat in a safe place to protect his home from intruders.

Do Octopuses Use Barriers to Protect Themselves?

Octopuses can bring different inedible objects near their homes to serve as barricades. For example, some species collect coconut shells to use as hiding shelters when the need arises.

An octopus can make use of any object he sees fit to carry home and hide in it, human-made waste included.

So, sometimes they make additions to their gardens in the form of a piece of garbage.

All of the octopus species living on the seabed make gardens.

The largest octopus garden to date is located 50 miles (80 kilometers) off the coast of San Simeon, a village in California (United States). The place is part of the Monterey Bay National Marine Sanctuary.

It’s a nursery where hundreds of female octopuses lay and care for their eggs.

The temperature of the water gets low when going this deep, and it’s almost impossible for divers to go scuba diving near the nursery. Underwater robots were used to investigate the large octopus garden and take footage.

The robot vehicles caught, on camera, hundreds of octopuses in lavender color. They were nestled among the rocks. Some of the animals even started clinging to the vehicles.

The funny thing is that, even though you have to go through freezing water to get to the largest octopus garden, still the water around the settlement is warm. Scientists discovered that the warmth comes from the seafloor releasing warmer water.

The area is in the Davidson Seamount Management Zone (an underwater mountain). Its highest peak is around 4000 feet (1220 meters) below the surface.

The Seamount is an ancient volcano. Maybe that’s the reason why the water is heated and why the female octopuses decide to nest here.

If you keep an octopus as a pet in an aquarium, you can see the magic of creating an octopus garden happen right before your eyes. Now, this isn’t a thing all octopus owners are very fond of.

Imagine you made the perfect aquarium setting that’s both beautiful and practical for the octopus to live and hide in. Chances are your pet will rearrange the whole thing and turn everything upside down.

So, don’t even bother creating a garden. The octopus will destroy it to make its own.

Octopuses generally avoid contact with others of their kind and prefer to spend their lives enjoying the ocean environment alone.

However, 50 feet (15.2 meters) below the surface in Jervis Bay (Australia), scientists discovered a rare sighting of a group of octopuses cohabitating on a small patch of the seabed.

What’s more unusual is that they can be seen throwing objects at each other, something that spiked the interest of many animal behavior experts. Very few animal species throw objects at one another, so it’s a significant scientific discovery knowing octopuses do so.

Octopolis is an octopus town that’s spread across a few square meters, but still is meaningful real estate for the population of gloomy octopuses inhabiting it. Like any other octopus habitat, you can expect to see thousands of scallop shells making up octopus gardens.

The town is built on a piece of metal, and the shells have been brought by the octopuses themselves. They are the perfect substrate for octopus dens.

With this, there is the problem of narrow space because the more shells that are added the less room the octopus has to maneuver.

Having neighbors at arm’s length is what drives octopuses to engage in boxing matches. It’s quite a common sight, actually.

As the town’s population continues to increase, no one is certain about the future of Octopolis. But frequent sticky situations the inhabitants get in will probably eventually lead to the destruction of their gardens and homes.

Octlantis is yet another community of octopuses that consists of dozens of dens. Signs of aggression and threat are also present here. The shells of their victims (clams and scallop shells) are used as building materials for their gardens and homes.

An interesting phenomenon is that the octopuses living in Octlantis can come to a neighbor’s den and eject him from his own home. The population constantly changes as new ones come and old ones go away.

It’s hard to track and identify individual octopuses, and no one is sure what they do after leaving the community. Scientists are thinking about tagging the animals and conducting thorough research on their migratory habits.

You may have heard the term “Octopus’s Garden” as a song title by the popular band The Beatles. The song was released back in 1969 and was the second song ever written by Ringo Starr.

The idea of choosing the tile and the lyrics came on a boat. While Ringo was eating squid for lunch, the captain of the boat explained to the rock star about the interesting phenomenon of octopuses building their gardens by collecting shiny objects and things.

Later, the musician admitted that while writing the song he was feeling under the weather and just wanted to hide from everything just like an octopus at the bottom of the sea.

Octopuses are cephalopods. Cephalopod literally means “head foot” and is a reference to the way the arms of the animals (octopus and squid) are directly connected to their heads.

Octopuses have bulbous-looking heads, large eyes, and eight arms. They are highly intelligent animals that use the art of camouflage to avoid being hunted. That’s why they remained in the seas for tens of millions of years.

All octopuses can match the colors and textures of the environment with those of their bodies. When they are camouflaged, no one can notice them even in plain sight.

When the threat is too grand, despite remaining hidden, they can quickly escape by shooting themselves forward with the help of a muscular tube (siphon) through which octopuses expel water.

The only hard part of an octopus’s body is its beak. Being soft-bodied means they can fit in very small holes, as long as the holes are not smaller than their beaks. They have an amazing ability to regenerate and can even grow an arm if they lose it to a predator.

There are more or less 300 octopus species in all the oceans in the world.

While most prefer to live in the seabed, some dwell near the surface, such as the paper nautilus species.

Although they unintentionally build home defenses by disposing of the exoskeletons of their prey, some use rocks instead to build a den. In this type of den, octopuses can even make use of objects to seal the openings.

When they are safely tucked inside the holes of the dens, they just pull the nearest object to cover the opening and travel off to dreamland.