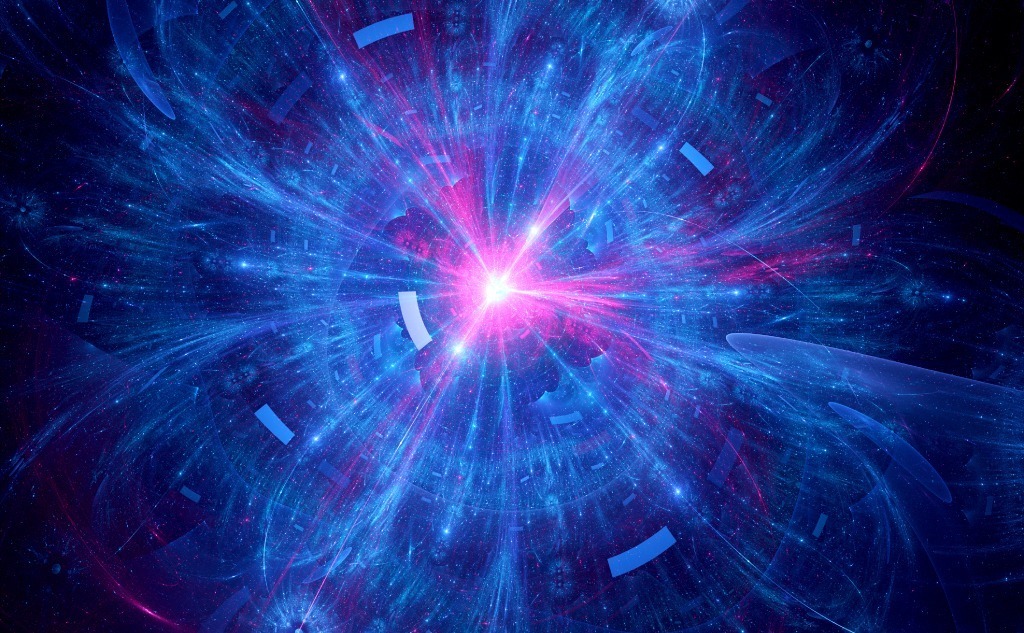 This is your mission 01 of the epochs of the Universe.

The Plank Era happened right after the Big Bang.

So if you want to travel back in time and experience the Plank Era, then you’re in the right place.

Mission 01 of the Epochs of the Universe – Planck Era

You are embarking on a journey through space and time itself.

Back through time, you traverse the eras of the Universe, closer and closer to the beginning of everything.

Your voyage explores all stages, or epochs of the Universe, from the start until this moment.

Plus, you have the only CosmoControl, to rewind, fast-forward, pause or resume space and time.

After leaving the big bang, the dawn of our Universe, you reach the Planck Era.

Immediately, you press the pause button on your CosmoControl, freezing time at a mere fraction of a second after the big bang.

Has the Universe now grown?

Otherwise, do planets, stars, and other familiar objects now exist?

You begin exploring this new epoch.

Now, you have reached the Planck Era.

Although, technically, you are still amidst the big bang itself.

Immediately, you look around. Yet, to your dismay, the Universe appears identical to how it looked during the moment of the big bang.

That is to say, the Universe does not look like anything currently. Everything is still utterly dark.

Indeed, your mission data tells you that the Universe has “grown.” Plus, it has also begun “cooling.” Yet, these terms are all but meaningless.

Checking the Universe’s ago in your mission data, you realize that the Planck Era occurs only fractions of one second after the Universe was born.

Technically, less than one quattuordecillionth of a second, to be exact.

In other words, a “1,” followed by 45 zeros. Unfortunately, your human mind does not understand this small fraction of time.

Still, in its utter infancy, the first light has yet to be created. And, the molecules that make up … everything are not yet able to exist.

Looking around, you see no planets, galaxies, stars, or anything else. The Universe is still a dark nothing.

Naturally, you are no stranger to seeing dark skies. While you were camping, traveling the countryside, or simply at your home, the night sky always appeared black.

But, those “black” skies at home were completely polluted with starlight, city lights, and even some light leftover from the Big Bang.

No, those skies were far from being black. Now, skies in this Planck Era are sincerely black. They are the kind of darkness that no words can accurately describe.

In fact, the very first single photon of light has not yet existed in the Universe.

Suddenly, you find yourself rather eager to move toward new epochs.

Epochs in which you actually see something!

Imagine the entire Universe crammed into a sub-molecule-sized speck.

The Universe’s entire mass, squeezed into a nearly invisible dot. In such conditions, temperatures are still unimaginably hot. While no longer infinite, like in your previous epoch, they are quite close.

In fact, temperatures during this Planck Era sit at 18 decillion degrees Fahrenheit.

Essentially, this is the temperature at our Sun’s core, multiplied millions of times.

Basically, your current epoch does not feel much better than the actual Big Bang.

Not to mention, you experience almost no change in density either.

Technically, the Universe has increased in size. Yet, this increase is so minuscule that the pressures you experience are no different than before.

Packed into a microscopic size, pressures are cataclysmic. Picture being hundreds of miles under the ocean with no protective equipment.

Now, multiply those pressures trillions of times, and you would begin to feel the Planck Era.

If you could capture a sand-grain-sized piece of the Planck Era, it would weigh trillions of pounds. Therefore, needless to say, the pressure you experience in this epoch is still unbearable.

What Is Really Happening? Scientific Explanation

Much like the moment the Big Bang occurred, the size of the Universe is unimaginably small.

In fact, so small that it could not possibly be observed with human eyes.

And, with everything crushed into such small space, temperature, density, pressure, and everything else are all but infinite. Truly, measured by numeric values that humankind can’t compute.

Now, such hostile environments mean that literally nothing we know today can exist. Air, elements, water, people, and anything else are not possible during the Planck Era.

Even the basic particles of matter are unable to stick together under such conditions.

Protons, neutrons, and electrons all bounce wildly and freely throughout the tiny Universe.

Therefore, without particles binding to form atoms, light itself still does not exist. Indeed, the Universe is still a mere soup of pure energy.

Firstly, the Planck Era still occurs during the actual big bang itself. Rather, the “Planck Era” defines the Universe prior to being 10-43 in age. This immensely small fragment of time is known as a Planck Unit.

And, in science, this unit is considered the smallest meaningful amount of time.

As previously noted, this sliver of time is hard to imagine.

We know seconds, milliseconds, and even shorter time lengths.

However, the Universe is less than one quattuordecillionth of a second old during the Planck Era. This is a “1,” followed by 43 zeros.

To human minds, the big bang and Planck Era would be one event, unable to be mentally deciphered as separate epochs.

Unfortunately, current physics and technology do not allow us to observe nor understand such distant periods. Therefore, we have no knowledge of know what happened or how.

Overall, the big bang and Planck Era are one and the same to you.

Because, at such small lengths of time apart, your human brain knows no difference.

Plus, temperature, density, and all else remain too extreme for anything to exist with such a small change.

Even fundamental particles of matter are in pure chaos during this epoch.

Therefore, this mission has left you eager to advance.

You genuinely hope for light and more familiar sights. Or any sight at all.

Perhaps, you can find this in your next epoch, the Grand Unified Theory Era!