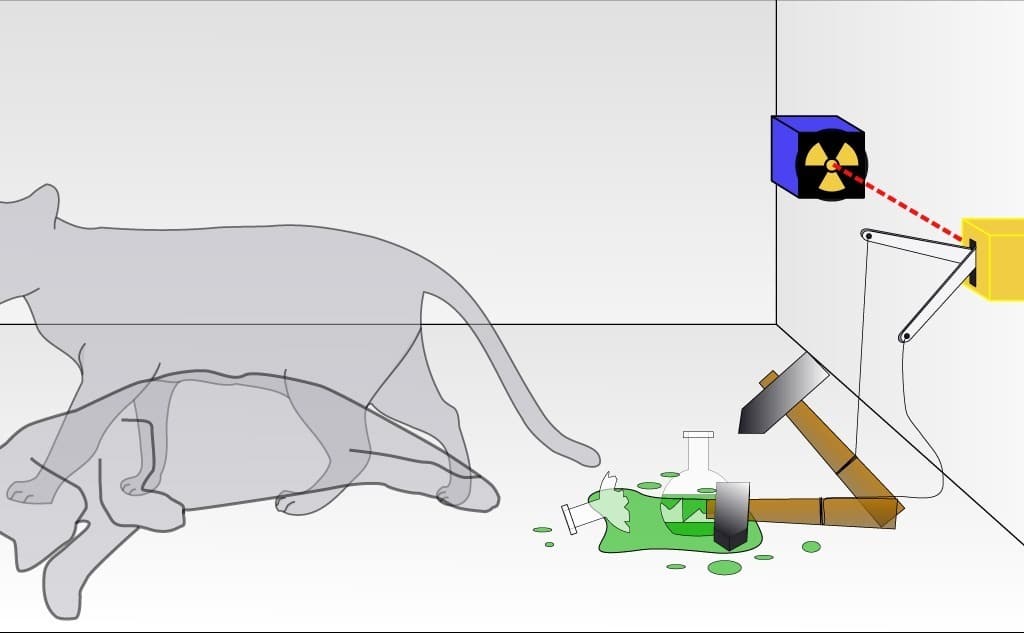 Schrödinger’s cat has a 50% chance of dying and 50% of living after an hour in an experimental box.

While the cat is in the box, it is both dead and alive (Copenhagen Interpretation).

You don’t know what you can’t observe.

If you want to finally understand Schrödinger’s Cat Experiment once and for all, then you’re in the right place.

However, some quantum concepts are certainly worth knowing about, extraordinarily fascinating and straightforward to grasp.

Easily, among the most famous quantum experiments was Schrödinger’s cat.

In other words, we don’t actually conduct the experiment. We use only our imagination and reasoning instead.

In fact, as we will later learn, it is truly impossible to physically conduct Schrödinger’s cat experiment, even if we wanted to. That being said, please under no circumstances attempt to conduct this experiment.

This article is purely to educate one on the purpose of the experiment, not to perform it.

Among Schrödinger’s prolific, Nobel-Prize-winning career was his infamous cat experiment.

In fact, this benchmark experiment has been the subject of jokes, shirts, TV show episodes, and more.

However, Schrödinger’s cat experiment has been both misinterpreted and misunderstood over time.

Hence, this article’s simple approach helps us fully understand where brilliant Erwin was coming from.

First, a cat is placed inside a sealed box for one hour.

Also, inside the box are:

Using the correct radioactive material allows a precisely 50/50 chance that a single radioactive particle will be emitted within one hour.

Therefore, to become stable once again, they release or emit some of this energy in particles.

We call this radioactive decay.

Next, our Geiger Counter will wait for a radioactive particle to be emitted.

And, if it records a particle, it will let the hammer drop.

As a result, the hammer breaks open the lethal cyanide container, killing the cat.

At last, when you open the box, the cat will either be dead or alive, depending on the outcome.

However, before opening the box, the cat is both dead and alive.

In fact, this is the very purpose of Schrödinger’s cat experiment.

But, how could that possibly be?

Basically, nothing about the matter is certain until we observe it.

In fact, this thought process is known as the Copenhagen Interpretation of quantum physics.

In other words, simply looking at matter actually changes the outcome of what happens to it.

Indeed, that is why we proclaimed previously in this article that one could not physically conduct this experiment, even if they so desired.

You see, the primary focus of the experiment is that prior to observation, the cat is both dead and alive simultaneously.

Therefore, visually observing or monitoring the cat during its hour-in-the-box time would alter and prevent an outcome.

Trippy to think about, isn’t it?

Realistically, yes, the matter could be at any place.

But, the probability of the matter being at some places is much higher than in others.

For instance, a carbon atom in your diamond ring could be on the Moon right now.

However, it’s much more likely that the carbon atom is on your finger.

You can’t know where something is unless you see it.

Until you see it, the Copenhagen Interpretation says that the atom is there and is not there.

Until you see the particle, you have no idea if it’s there or not.

This makes sense in quantum physics, but not in real-world physics.

Actually, this very style of thinking was the purpose of Schrödinger’s cat.

You see, while Schrödinger found such possibilities true for single particles, they would not be possible on larger objects, like cats.

In fact, Schrödinger created his famous cat thought experiment to show how absurd the Copenhagen Interpretation was for larger objects.

But, to sum up, let’s break it down into three easy bullet points: