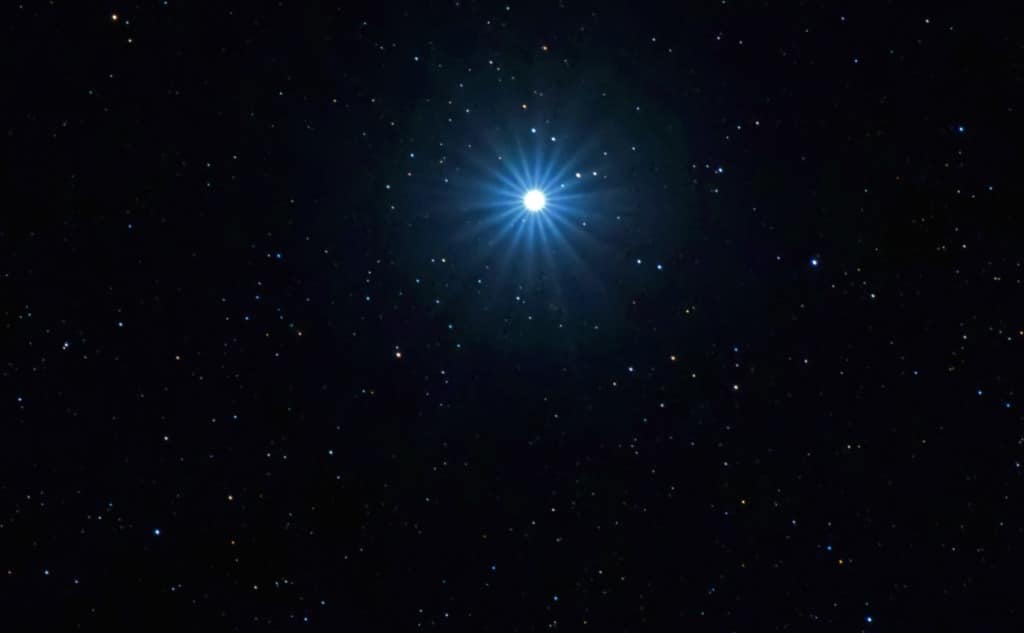 These are 10 fascinating facts about Sirius.

So if you want to learn 10 fascinating facts about Sirius, then you’re in the right place.

Gaze up at the night sky, anywhere on Earth, and you will see Sirius.

As the brightest star in our Earth skies, Sirius outshines planets, nebulas, and several other wonders.

But, Sirius is a complicated system containing two stars.

Chalked to the brim with fascinating features, both stars are among the most interesting objects the universe has to offer.

Being two different types of stars, Sirius A and B have very different attributes.

For instance, Sirius A is nearly 1.5 million miles across, whereas Sirius B is only 7,000 miles across.

That’s nearly five times as hot as our Sun.

#2 It Will Only Get Brighter

Recent observations show that the Sirius system is slowly approaching our solar system.

In fact, during the next 60,000 years, the already bright star will only become brighter.

Eventually, the system will outshine the likes of Venus and other bright objects.

#3 All of Your Ancestors Saw Sirius

Humans have observed Sirius for centuries.

Actually, Sirius comes from the Ancient Greek term for “glowing.”

Ancient Egyptian civilizations 4,000 years ago based their calendars on Sirius rising and setting.

Even Polynesian civilizations used Sirius as their main navigation.

#4 He Star so Bright, It Shines Without Night

Plus, its “near” proximity to Earth amplifies its brightness that much more.

Some locations can even observe Sirius during broad daylight.

Naturally, city lights are unusually low in these areas.

White dwarfs are large stars whose mass is smashed into a very small space.

Because of this, gravity and density are immense.

In fact, a sugar-cube-sized piece of Sirius B would weigh around one ton (2,200 pounds).

“Dog star” is a common nickname for Sirius. It earned this name by being the brightest (alpha) star in the constellation Canis Majoris, Latin for “greater dog.”

Sirius B is now a white dwarf.

A massive star has already stopped generating nuclear fuel during this phase, shed its outer layers, and become much smaller and dimmer.

In fact, Sirius B is currently the closest white dwarf star to Earth.

#8 My Older Brother Used To Be Bigger

Big and bright Sirius A is far larger and brighter than its companion, Sirius B. This is because Sirius A is a main-sequence star, one that is still alive and ticking.

Whereas Sirius B is now a white dwarf, much smaller, dimmer, and in its twilight years.

Billions of years ago, when Sirius B was still in its prime, it would have been the much larger of the two.

Two companion stars comprise the Sirius star system, Sirius A and B.

Although gravitationally bound, the pair lies 20 astronomical units apart. This distance equates to around 1.8-billion-miles.

In other words, the same distance between Earth and Uranus.

Technically, Sirius is a two-star system. In astronomy, this is considered a binary system.

We are most familiar with much brighter Sirius A, which shines visibly in our night sky.

In fact, companion star Sirius B is around 10,000 times less bright.