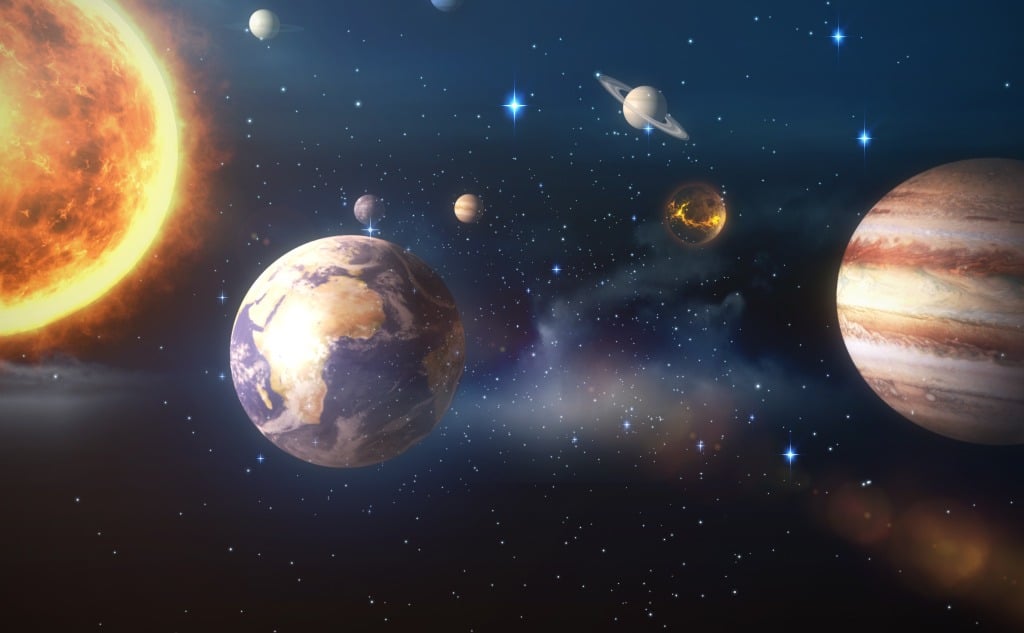 These are 10 fascinating facts about our solar system.

How about that the Sun IS our solar system?

So if you want to learn 10 fascinating facts about our solar system, then you’re in the right place.

Indeed, it’s thrilling to imagine what might exist billions of light-years away in other galaxies.

However, to find truly amazing cosmic wonders, you need only look to our own home, the solar system.

In fact, we can spot many wonders right in our own backyards through a telescope.

#1 You Could Never Stand on Jupiter, Saturn, Uranus, or Neptune

Firstly, you’d never want to stand on these planets, even if you could: They are horribly deadly environments.

However, they are also made of gas, hence their title gas giants.

When we see pictures of gas planets, they appear round and give the impression that they have dirt and rock-like surfaces, similar to Earth.

But none of these worlds have solid surfaces!

In fact, once you “set foot” on these planets, you’d simply fall, or float inward towards their central cores, inevitably falling to your wild death.

#2 The Sun Truly IS the Solar System

Yes, we all know from grade school that everything orbits around our Sun.

But, did you know that the Sun accounts for over 99% of our solar system’s entire mass?

Basically, mass is simply how much stuff something is made of.

In other words, all planets, asteroids, comets, and everything else are less than 1% of the solar system!

#3 Saturn Isn’t the Only Planet With Rings

Indeed, Saturn’s rings make it the most famous of all planet.

But did you know other planets have rings too?

In fact, all four giant gas planets in our outer solar system have ring systems.

In other words, Jupiter, Saturn, Uranus, and Neptune.

Clearly, Saturn’s rings are by far the largest.

And, other planet’s rings can be extremely faint, even impossible to spot with backyard telescopes.

In fact, humans did not know other ringed planets existed until the 1970s.

#4 The Biggest Planets Are Not Necessarily the Slowest

As humans, we often associate larger size with slower speed.

Sure, this may be true for humans in a foot race. However, planets don’t abide by such laws.

Jupiter, our most giant planet, spins around its axis in less than half of the time Earth takes.

In other words, a single day on Jupiter is only 10 hours. Plus, Saturn’s day is only 11 hours, and Neptune’s only 16.

However, more minor planets like Venus have days lasting over 5,000 hours. Bad news for Monday.

#5 Our Solar System Is Surrounded by an Ice Doughnut

As mentioned above, the Oort Cloud is a sphere.

However, a doughnut-shaped region of icy objects also surrounds the solar system, known as the Kuiper Belt.

Think of this flattened region as an icy belt surrounding the solar system.

Not to mention, the KB contains planets, including the well-known former planet, Pluto.

Finally, making history in 2015, NASA’s New Horizons spacecraft reached Pluto. In turn, the Kuiper Belt became the first manmade object to do so.

#6 Our Solar System Exists In a Theoretical Ice Shell

Far beyond Neptune, or even Pluto, a hypothetical frozen sphere exists, known as the Oort Cloud.

Named after its predictor, Jan Oort, the chilly sphere is thought to contain trillions of icy objects.

Some objects may be large building-sized comets or tiny ice pebbles.

But, if we think the Oort Cloud is there, why haven’t we seen it?

Simply put, the Oort Cloud likely begins around 464 billion miles from the Sun.

Even our farthest spacecraft, Voyager I, has only traveled 12 billion miles since 1977.

Therefore, making it to the Oort Cloud won’t happen any time soon.

#7 Saturn Could Float In a Bathtub

In fact, the planet’s density is similar to gasoline or lighter woods.

But, its possible floating abilities simply mean its density is lower than water.

Nevertheless, for a massive planet, this empty density is still quite surprising.

At last, finding a bathtub to test this hypothesis may be an issue. Saturn is over 70,000 miles wide.

#8 Earth Is Not Round

Firstly, we hope you now understand, Earth is not flat. However, most of us may not know it’s also not technically round.

Actually, Earth is considered an oblate spheroid. Simply put, it’s fatter in the middle and more slender at its North and South poles.

Basically, it looks like giant hands smashed it from the top and bottom.

Plus, more recent surveys also indicate indenting by the South Pole and some inflations by the North Pole.

Finally, tall mountain ranges and low valleys only help to give Earth anything but a round shape.

Obviously, poor tiny Pluto was bumped down to a dwarf planet.

However, a search for a yet-to-be-discovered ninth planet is happening right now.

In fact, NASA has even enlisted the general public’s help in the search.

Based purely on mathematical predictions and odd orbits of distant objects, a ninth planet has been theorized.

Thought to be around 10 times Earth’s mass and orbiting beyond Neptune, the mysterious planet is among astronomy’s biggest focuses.

#10 If Jupiter Were Around 80 Times Bigger, It Might Have Been a Star

Jupiter is truly gigantic. We know this.

But, did you know, being only 80 times larger could have turned our largest planet into another Sun?

Indeed, at such a behemoth size, nuclear fusion may have kicked off inside of Jupiter.

And, this is the same nuclear-energy-making process occurring in our Sun’s and all stars’ core.

Fortunately, we’ve dodged a bullet, as two Suns would be genuinely horrific.

In fact, double stars would have meant humans never existed on Earth—too much heat.