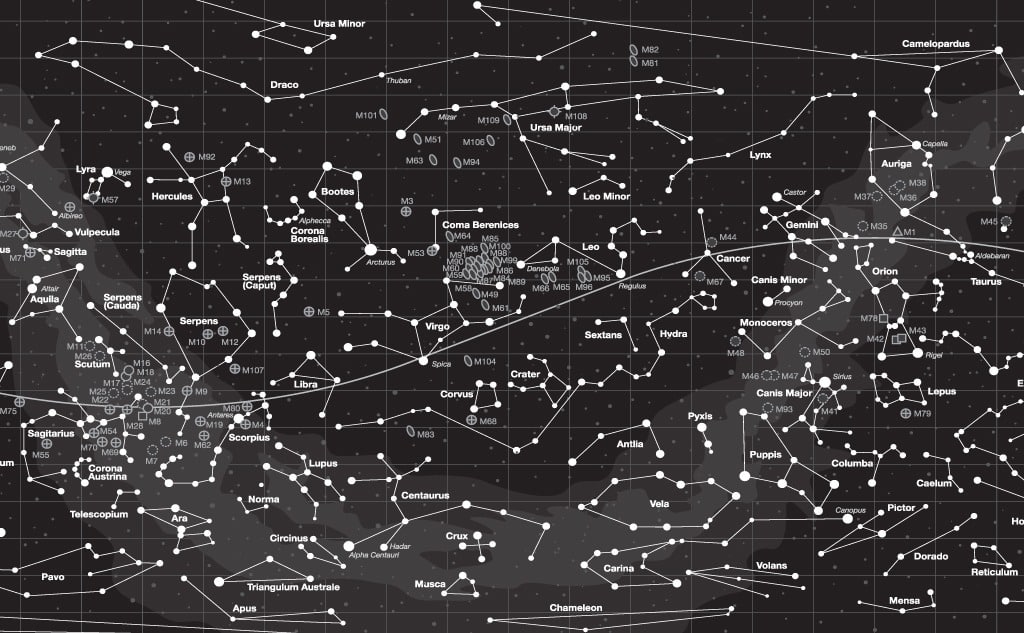 Since the objects are visible in the night sky depending on where you are located on Earth, the map helps you understand the orientation of constellations and their stars.

If you want to take a look at a high-resolution star constellation map, then you’re in the right place.

What Is in the Star Constellations Map?

This map marks stars and major constellations as they are visible from the equator. Because the map is centered in this visibility range, it features constellations in both the northern and southern hemispheres.

How Do You Use the Star Constellations Map?

Because the map is rectangular and the sky is not, there is distortion in the map. This is represented by the curvature in the equatorial line. You can think of the map being rolled in such a way that the line would appear straight. That helps to understand how the constellations will actually appear in the night sky.

While the map is accurate and functional, it is designed for decorative purposes. The best way to use the map is to enjoy what it is showing you.

Why Have a Star Constellations Map?

Aesthetics aside, a star map can help you get into stargazing. The map shows you how stars are arranged in order to find major constellations. The constellations are all in different parts of the sky at different times of night. So, you can use them to orient yourself and find any particular object of interest.

If you imagine the equator and think of a line in the sky to match it, the degrees north or south of that line where each object will appear are denoted in the map.

What Is Included in the Star Constellations Map?

This map contains all of the major constellations in the northern and southern hemispheres. It identifies 88 star constellations and the primary stars that comprise them.

This is not a complete map of the night sky. Such a map would be absolutely monstrous in size. In fact, astronomers primarily use computer programs to track all of the known and named objects in the sky. There are too many stars and celestial objects to fit them all in a single picture or on a simplified map like this one.

Instead, this map has sufficient information to help you navigate the night sky. With the constellations mapped here, you can find areas of the sky. If you are interested in finding or observing any particular object in the sky, you will first want to learn where it is to major constellations.

The map can help you find the right constellation. In turn, that can help you determine where to point your telescope for closer examination.