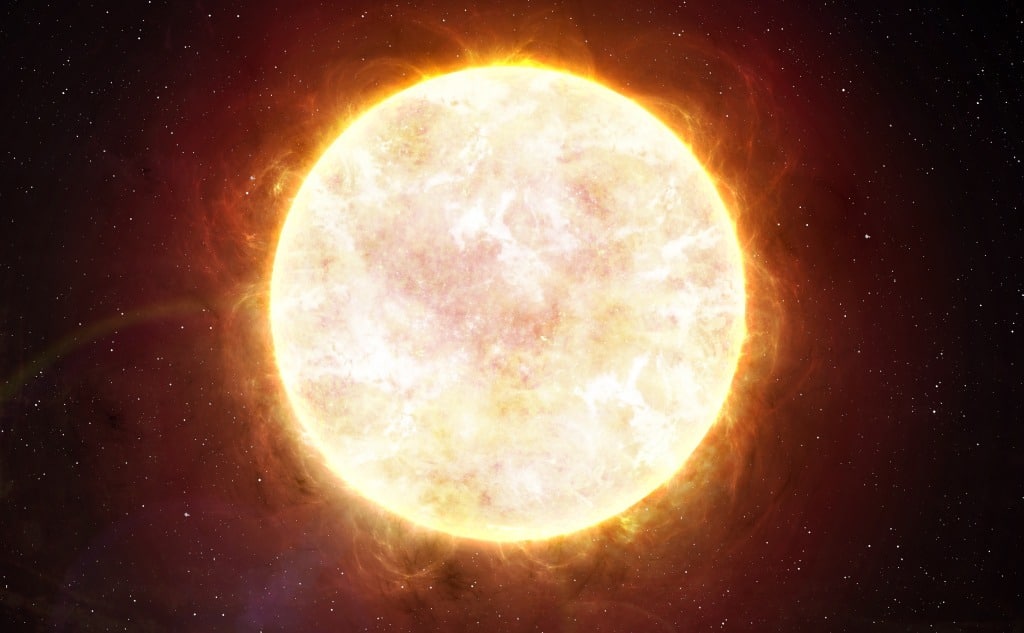 These are 10 fascinating facts about the Sun.

From the Sun being our Solar System down to the Sun one day destroying the Earth.

So if you want to learn 10 fascinating facts about our Sun, then this article is for you.

All of us have experienced the Sun.

We see it in the sky. We feel its warmth on our skin.

But, our home star is also filled to the brim with cool facts.

So, here are 10 fascinating facts about the Sun!

#1 Our Sun Is Middle-Aged

The Sun is a type G2V main-sequence star. In other words, our Sun is currently middle-aged.

Main sequence stars are in their prime, alive and well. But, unlike humans, middle-aged stars, like the Sun, are around 5 billion years old.

#2 The Sun IS the Solar System

It is no secret that the Sun is gigantic. But, how gigantic?

Well, the Sun makes up a whopping 99.8% of all the mass in our solar system.

So, Jupiter, Earth, Neptune, and everything else only account for a measly 0.2%. Yep, that’s big.

#3 How Much Bigger Is the Sun Than Earth?

Nearly 1.3 million Earths could fit inside the Sun.

Not to mention, the Sun is considered to be a rather “average” sized star in our universe.

However, the Sun’s fuel is a process called nuclear fusion.

The extreme pressure inside of the Sun is strong enough to smash hydrogen atoms together to form heavier helium atoms.

And, upon smashing, excess energy is released as radiation. This radiation is the heat that flows from the Sun, heating Earth and helping life flourish.

#5 Our Sun Will Become a Colorful Cloud of Gas

Eventually, when our Sun begins to die, it will shed its outer layers. At this point, it will become a planetary nebula, which is a massive sphere of gas.

Next, the newly shed materials will be heated to millions of degrees, glowing in various colors. Of course, this will not happen for billions of years, but what a sight.

#6 One Day, the Sun Will Destroy Earth

But, never fear, you’ve got 5 to 7 billion years to prepare.

Eventually, when the Sun runs out of hydrogen to “burn” as fuel, it will turn into a red giant star.

This type of star is much cooler but is truly enormous in size.

Upon reaching its massive new size, the newly red Sun will expand out far enough to completely engulf and incinerate Earth.

#7 One Day, the Sun Will Destroy Earth

After going “red giant,” (see above), the Sun’s leftovers will remain as a white dwarf.

When stars die, their own powerful gravity crashes in on themselves.

Now, the compact leftovers are an extremely dense white dwarf star, typically around the size of an average planet.

#8 The Sun Is Really Fast

Yes, we all learn about planets orbiting the Sun. But have you ever wondered how fast the Sun moves through space?

After all, the Sun is orbiting the center of our Milky Way galaxy. And, in its travels, the Sun is speeding at around 480,000 miles per hour.

But, even at this wild rate, it takes the Sun 230 million years to complete one galactic orbit.

#9 Northern Lights Are Caused by the Sun

We have all seen the beautiful aurora borealis (or northern lights) of Alaska and other regions. But, did you know the Sun causes these wonderful light shows?

As the Sun blows its powerful solar wind, it hits Earth’s atmosphere, and the particles interact.

The result of these interactions is the colorful swirls in the northern skies.

Everyone has felt the Sun’s warmth. We all know it is scalding-hot.

But did you know the core of the Sun can reach 27 million degrees?

At this temperature, the strongest metals (steel, iron, titanium) would melt instantly.

If it were not for the Sun’s own gravity pushing inward, it would explode like a gigantic nuclear bomb.