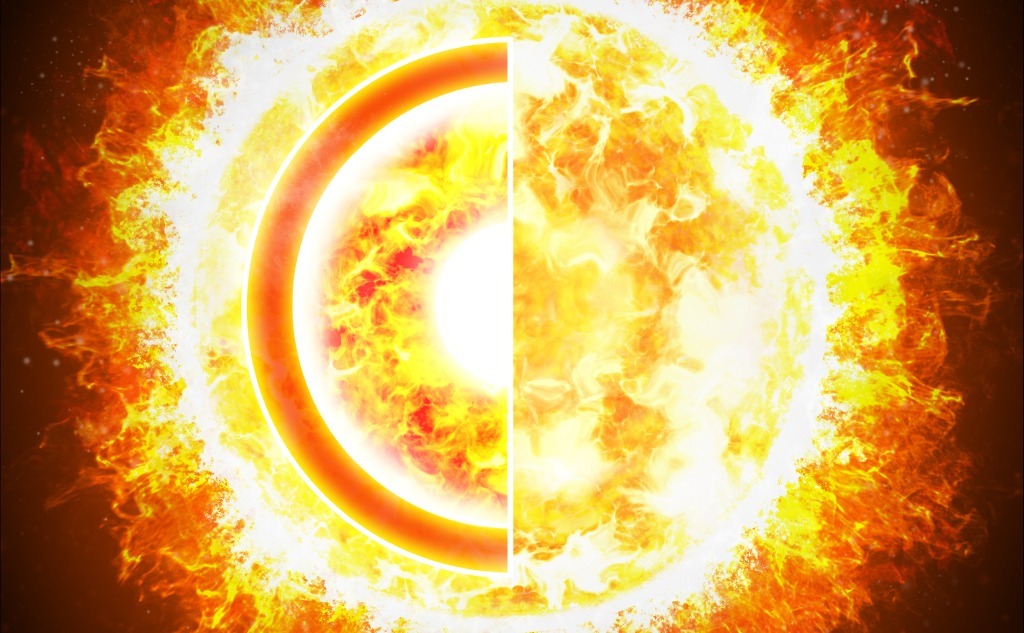 These are the 7 layers of the Sun in order.

From the interior of the Sun to the corona layer.

So if you want to understand all 7 layers of the Sun, then you’re in the right place.

7 Layers of the Sun in Order Explained in Simple Terms

Our Sun is a beautifully complex star:

Keeping itself alive via nuclear fuel, the Sun is a vast system of layers and fascinating processes.

But, while complex, understanding the Sun, in general, is exciting and straightforward.

To start, here’s an overview of the 7 layers of the sun:

Let’s dive in and examine all the layers of the Sun in order.

#1 Solar Core of the Sun

First, let’s dive deep and explore the interior of the Sun.

Three layers, a core, radiative zone, and convective zone, comprise the insides of our star.

Deep within the Sun’s interior lies the core.

Initially, all the power, energy, and heat generated by the Sun is born here. In other words, the core is the Sun’s heart.

Pressures and temperatures are at their highest levels within the core. In fact, the temperature at the core can reach a staggering 27 million degrees Fahrenheit.

Under such extreme conditions, atoms move so quickly and are squeezed so tightly that their nuclei are smashed together. But, instead of destroying each other, the two atoms combine to form heavier, more complex atoms.

In the case of our Sun, hydrogen is constantly fused into helium. This process, called nuclear fusion, is the lifeblood fuel of all stars.

Finally, as the atoms combine, they release excess energy to remain stable. In the end, this excess energy will become the light and heat we experience here on Earth.

Due to the massive size of our Sun, it creates tremendous gravity, constantly pushing inward on itself.

However, the core’s powerful nuclear fusion is constantly pushing outward.

Ultimately, the Sun stays alive in this delicate balance of inward gravity and outward nuclear energy.

#2 Radiative Zone of the Sun

Next, beyond the core lies the radiative zone. At this point, density, pressure, and the temperature gradually decrease.

Now, the energy created from the core’s nuclear fusion is carried through the radiative zone. At this point, the energy is now in the form of electromagnetic radiation.

In other words, energy has become light, carried by photons, traveling outward towards the surface.

Though not as dense as the core, the radiative zone remains extremely dense.

In fact, core-generated light takes around 100,000 years to bounce through the radiative zone.

#3 Convective Zone of the Sun

The newly-formed heat slowly cools as it rises toward the Sun’s surface.

Eventually, as it cools enough, it falls back down toward the radiative zone, heating up once more.

We see a similar process happening in a pot of boiling water. As the water boils, rolling bubbles of hot water form like convection cells.

#4 Exterior of the Sun

#5 Photosphere of the Sun

Greek for “light sphere,” the photosphere is the layer of the Sun that we are most familiar with, usually through pictures.

Visible light first appears in the photosphere. Though unsafe to look at, the photosphere is where our human eyes see the Sun’s light and brightness.

Also, this layer is covered in skin-like granules caused by convection cells beneath.

In fact, these granules last only around eight minutes, causing the constantly changing surface patterns on the Sun.

Temperatures in the lower photosphere are around 11,000º F, whereas temperatures near the top stay around 6,700º F.

In fact, a sunspot’s center is thousands of times stronger than the Earth’s magnetic field.

#6 Chromosphere of the Sun

Next, beyond the photosphere lies the chromosphere. This complex layer extends outward for over 3,000 miles.

At temperatures, this high, hydrogen atoms radiate as rich red colors. Therefore, the red emissions give this layer its name, Greek for “color sphere.”

The chromosphere appears faint against the bright photosphere background.

Typically, to visually see this layer and its activity, special equipment is required.

Using solar telescopes and spectrographs, for instance, can reveal features such as dark filaments, magnetic field lines, and more.

However, such advanced equipment can be both expensive and complicated to use.

But, with simple and inexpensive eyeglasses, anybody can view the chromosphere during partial and total solar eclipses.

#7 Corona of the Sun

Finally, we reach the Sun’s corona, Latin for “crown.”

Similar to the chromosphere, the elusive corona is most often visible during an eclipse. This layer appears as a white crown around the Sun, which is actually hot plasma.

Strangely, temperatures in the corona swell to nearly 2 million degrees Fahrenheit. At these temperatures, elements like hydrogen and helium are stripped of their electrons, leaving a bare nucleus.

Only much heavier elements, like iron, are capable of staying intact.

Ultimately, the energy from the stripped electrons causes the staggering temperatures in the corona.

However, the corona provides several fascinating and interesting features. For instance, large spikes of plasma, called streamers, shoot far out from the Sun. Plasma trapped by the Sun’s magnetic fields creates the spike shapes.

Perhaps most notable, the corona is ultimately responsible for our aurora borealis on Earth.

As charged particles flow outward from the corona, they travel far into space. In fact, the winds carry far beyond Neptune and even Pluto.

And, as some of the powerful solar winds hit Earth’s atmosphere, they interact with gases and elements. These interactions are responsible for the ethereal and colorful auroras we enjoy here on Earth.