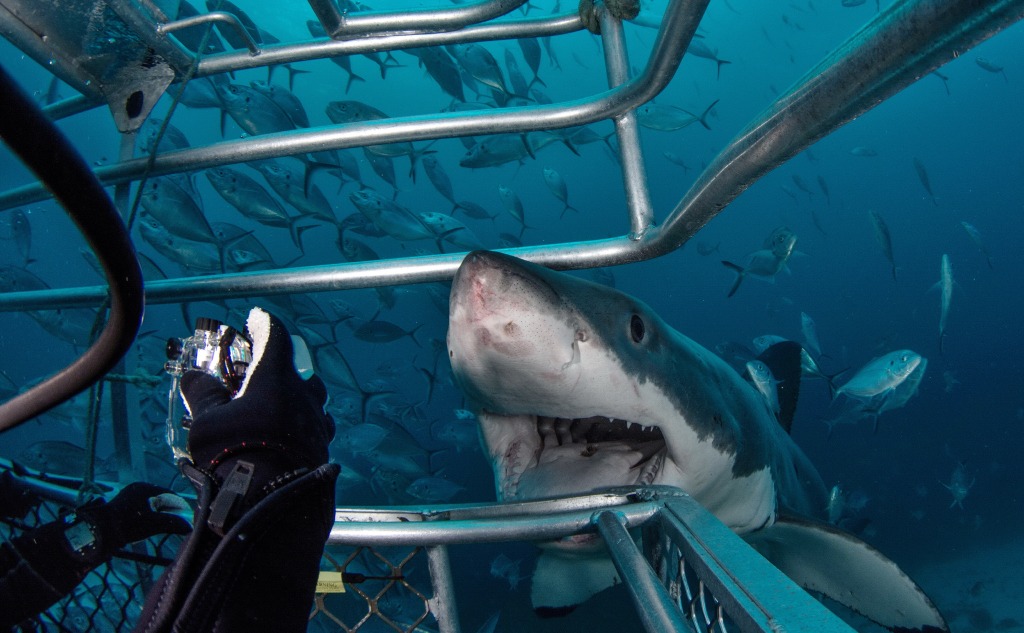 Here’s why we swim with sharks but not with crocodiles:

Most sharks dislike human flesh, and they have expectations from their prey.

They’re pretty predictable, and even if they bite a human, they’ll swim away because that’s not for them.

Crocodiles are unpredictable, aggressive, and opportunistic.

Once they have you in their grip, there’s almost no letting go.

If you want to learn all about why we swim with sharks but not with crocodiles, then you’re in the right place.

Is Swimming With Sharks Dangerous?

Swimming with sharks without any protection around you is very dangerous.

Even when you are swimming or diving protected by a cage, with a professional guide, and in a flock of well-fed sharks, there is still some danger to it.

A shark won’t feel a pleasurable sensation when devouring a human, but before it decides that you are a waste of time, it may have already caused severe damage.

There is one species of shark called the tiger shark that has a nondiscriminatory taste and will feast on human flesh.

From 2015 to 2019, there has been an average of 80 annual incidents where sharks attacked humans without being provoked.

Since the beginning of cage diving with sharks, there hasn’t been a single fatality.

The closest any cage diver came to death was a British tourist in South Africa whose cage was fiercely attacked by a great white shark back in 2005.

Is Swimming With Crocodiles Dangerous?

Getting anywhere near a crocodile is dangerous.

This animal can kill on land and in water.

To maintain their active hunt, they can crawl out of the water to take humans from the shore.

Hundreds to thousands of people get attacked by crocodiles each year.

Almost half of the attacks are fatal for humans, depending on which crocodile species attacked them.

Statistically speaking, you have a better chance of staying alive at the end of a Russian roulette rather than after being attacked by a crocodile.

So whether you are on the edge of the water or inside it, you become fair game for the crocodile.

To lower the chances of prey escaping, including you, these animals kill in groups called basks. They can even devour a hippopotamus when acting as a crew.

While there is no exact number of croc attacks that happen, the approximate number of crocodile attack-related deaths in humans is around 1.000 per year.

Why Are Crocodiles More Dangerous Than Sharks?

Crocodiles attack intentionally to murder. They don’t want to scare away intruders or defend themselves. They just want blood.

Unlike sharks, whose movement can give you an idea of their intentions, the crocodile is a completely unpredictable being.

Most shark species aren’t territorial (only the bull shark and blacktip shark are).

Crocodiles are social animals but don’t tolerate when strangers and even other unknown individuals of their kind invade their territory.

Sharks are animals that don’t enjoy fighting, even though their physical appearance suggests confrontation.

What they enjoy is ambushing sea turtles and seals while hunting. There’s not much fighting involved in this process as well.

Crocodiles do enjoy the taste of humans, but not every attack is food-related.

Many times when a crocodile kills a person, it will just leave the body lying around. That just shows how much crocs like the act of killing for the fun and amusement of it.

It’s a rarity in nature for animals to kill without a strong reason (defense/food).

One research shows that sharks occasionally get eaten by these reptiles. It’s only smaller sharks, but still, we see who is higher on the food chain.

In the act of killing the crocodile grabs on its victim and rolls it around.

The Death Roll is mostly reserved for larger prey. This way, the victim gets disoriented and drowned very fast.

Some videos visually describe this action:

A Nile crocodile from Burundi named Gustave is probably the most notorious man-eater of his kind.

It’s rumored that this large male killed as many as 300 people in his lifetime.

The real number is probably closer to 100 individuals, but that’s still a lot.

Can You Swim With Crocodiles Anywhere in the World?

You can swim with crocodiles in a controlled and uncontrolled environment only in two places in the world.

Face-to-face encounters with a saltwater crocodile while being protected by the cage of death is a tourist attraction in Australia that offers 15 minutes of amusement.

The cage is made out of Perspex or Polymethyl Methacrylate, an acrylic material.

Swimming in a crocodile’s natural surroundings can be done in the diving center in Xcalak in Mexico.

The diving organization makes it possible to share glazes with a wild crocodile completely unprotected freely.

There are no cages, and the only security is the human handlers and the animal’s goodwill.

The Difference in Cages for Sharks and Crocodile Diving

The cages for crocodile diving in a controlled environment don’t have bars purposely.

If there were bars, it would be easier for the animal to grip on them and break them.

Some visible teeth scratches on the Perspex walls make hesitant participants not want to go inside the tank.

Cages for shark diving are made out of aluminum.

Steel is way stronger, but aluminum is easier to transport and carry and doesn’t corrode in the water.

While sharks aren’t so interested in the cages and can’t easily break them, a crocodile will have no trouble destroying this type of enclosure.

A crocodile has a bite force almost 3 times stronger than the bite force of the great white shark.

Environmental Differences Between the Species

Sharks dwell in the great blue open, swim among beautiful coral, and there is clear water and magnificent biodiversity everywhere around them.

That’s why diving with sharks is a way more attractive and enjoyable thing to do. You have the chance to see a whole new paradise in front of you.

On the contrary, crocodiles prefer swamps and shallow water.

The muddy ground also makes the water muddy, so no person would feel a big urge to get in with them.

Crocs like dirty water because it camouflages them so they can ambush their prey.

Most of the cages made for shark diving are attached to the boats or are big enough so that they require deep water.

Another problem with swimming with alligators is that you can’t design a cage for shallow waters that can be easily placed in the water and completely protect the person inside it.

When Did Cage Diving With Sharks Start?

A lot of professional scuba divers can’t get enough sharks in front of their eyes throughout their lifetimes, while most of us are more than happy never to encounter one.

For the inexperienced, there is certainly a negative image about this beast that appears to be quite sinister in our minds.

Scuba diving in a cage to observe sharks was an adventure reserved for a handful of daredevils up to 20 years ago.

Increasing the regulations and safety measures made it possible for a wider population of people, even children, to feel this adrenaline kick in their faces.

Only four places in the world offer cage diving, and these are:

The first two places are the most popular ones.

Do you know the reason why you can go cage diving here?

There are large colonies of seals around these islands and bays, with seals being the main great white shark prey.

The late 60s marked the very start of cage diving with sharks in the South Australian Spencer Gulf.

Divers like Rodney Fox and Valerie Taylor were the first that attempted it with help from local fishers who had techniques to lure great white sharks to their boats.

Rodney Fox, the guy who made the whole shark-diving experience possible for people, was also the first to get into a serious shark attack incident and talk about it.

He was the first person to survive a great white shark attack.

462 stitches were needed to save his life.

After the near-death experience, he came up with the idea that if it’s possible to watch encaged wild animals in the zoo, maybe the cages can help observe sharks.

In 1976 the first bigger shark tour took place, just after the movie Jaws was put on the air.