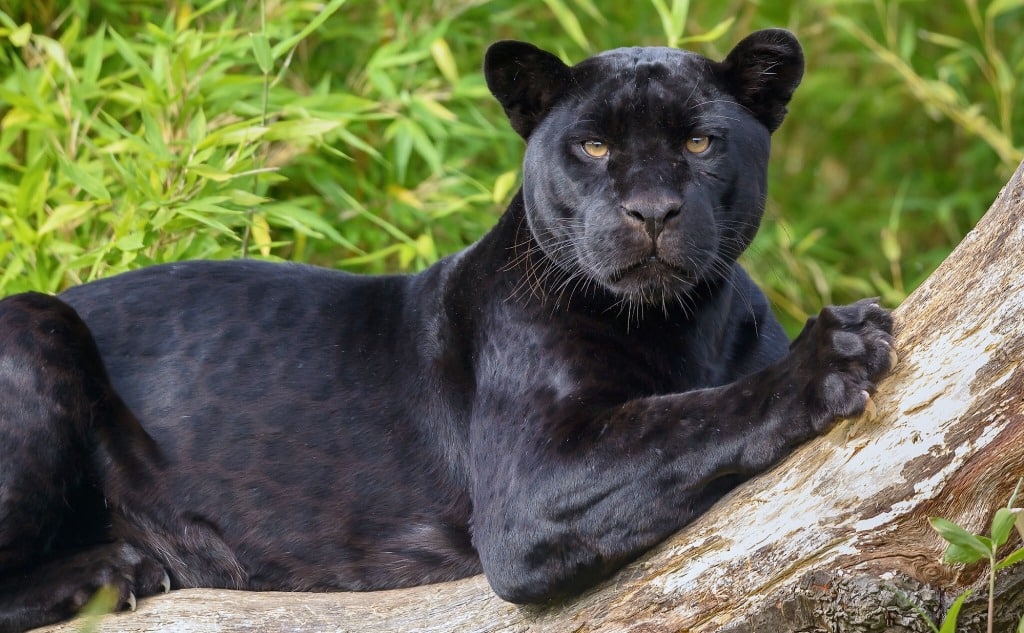 Here’s who wins in a fight between a tiger and a panther:

The tiger will win almost any fight with a panther.

The panther is much smaller than a tiger, and the tiger is more massive.

Usually, however, greater size comes at the cost of less maneuverability.

Tigers, however, are unique in the sense that their size does not hamper their agility.

If you want to learn all about who wins in a fight between a tiger and a panther and why so, then you’re in the right place.

What Happens When a Tiger and a Panther Fight?

The seven big cats form the ruling elite of the wild:

They mostly coexist in the wild without any serious collisions. They are powerful and extremely agile creatures.

The innocent grass eaters are their usual victims. So does being a big cat mean immunity from any sort of danger?

Who can threaten these savages of the wild?

An old saying goes, “only iron can cut iron.”

The giants of the world, such as elephants, giraffes, and rhinoceros, can beat big cats in a fight, but they usually don’t attack them first.

Only a big cat can fight the other on totally equal footing.

So, what would happen when the largest of the big cats (the tiger) decides to assert its dominance and subdue one of its deadly colleagues (the panther)?

The tiger is well-known for subduing silverback gorillas and grizzly bears, but can it crush a fellow feline?

To answer this, an introduction of both these predators is necessary.

Who Is the Tiger (Panthera Tigris)?

These beautiful, muscular, and impressive animals are the most savage hunters of the wild.

Do you remember school day visits to wildlife zoos?

These majestic and beautiful wild cats usually attract more people than the other animals.

Truly speaking, tigers are at the apex of strength, beauty, courage, and ferocity. They possess enormous strengths, which make them supreme hunters.

The tigers living in each region develop different features according to the requirements of their geographical area.

Consequently, at least 9 regional subspecies of the tigers are described in the literature.

In literature, the Bengal tigers and the Siberian tigers are the most commonly mentioned subspecies.

For the sake of avoiding confusion, we will discuss the medium-sized Bengal tigers.

The captives in zoos can go even higher.

Habitat and Diet of Tigers

Tigers have a wide range of geographical distribution but are normally found in rain forests, savannah, grasslands, and even the swamps of Bengal.

They prefer a habitat that has an abundant supply of fresh water and dense green vegetation.

The dense vegetation means prey is abundant for them, like large ungulates and hoofed animals in particular.

They are courageous creatures and can attack and kill much larger animals, like rhinoceros, elephant calves, and crocodiles.

Have you ever seen a tiger fighting?

Recall their fighting style. They attack their victims with front claws and grasp their necks with sharp canine teeth, suffocating them to death.

Their paws are blessed with four massive and sharp claws (the frontal paws have an additional dewclaw). These claws are razor sharp and are 4 in (10 cm) long.

The prey is doomed if it comes into contact with these claws.

Social and Hunting Behavior of Tigers

Unlike the extremely social lions, which attack and prey in their pride, tigers are solitary hunters. Obviously, they don’t like to share their spoils with anyone.

This is a disadvantage when the tiger is facing large animals like elephants.

However, there is something unique in the fighting style of the tiger.

It likes to stand on its hind legs and uses its deadly frontal claws to attack the victims.

Their bite force of 1050 PSI is also devastating and can dismantle prey easily. The average strength of a human bite is 162 PSI.

Tigers are better hunters at night. Their night vision is almost 6 times higher than humans.

A structure called tapetum lucidum is responsible for their night vision.

The excellent night vision enables them to hunt down the isolated elephant calves, easy victims in the darkness.

The sneak attack enables them to ambush the almost unaware victim.

Tigers are good swimmers, and unlike the Asiatic lions, they don’t hate the water and can chase their prey in the water.

Due to this ability, even fearsome hunters of the shores like crocodiles are themselves under threat.

A hungry tiger can go in the water and dine on a crocodile without any hesitation.

Jumping Ability and Speed of Tigers

Being the largest doesn’t mean being the fastest, though. They are way faster than a lion but considerably slower than a cheetah, with an average speed of 35-40 mph (56-64 kph).

Who Is the Panther (Panthera Pardus)?

The panther is a lightweight version of the tiger.

A panther is not a separate animal species from a tiger. Instead, it is a black-coated version of leopard (Panthera pardus) or jaguar (Panthera onca).

Why are they black?

The darkness of color is related to the production of a colored compound called melanin in the body.

A corresponding white tiger is also found occasionally in which the production of melanin is absent.

The black panther has some unique features which are not shared with either leopards or jaguars.

Panthers are inhabitants of Asia, Africa, and America. Their geographical location depends on whether it is a black jaguar or black leopard.

Central and South America, Asia, and sub-Saharan Africa are their natural reservoirs.

Due to their adaptability and elasticity can live in several habitats, including deciduous and tropical forests, marshes, swamps, grasslands, and even in deserts and mountains.

They don’t represent a separate species but are colored variants of others. They have a large range of sizes.

Their whole body is covered with shiny black fur, including the tail. They have no spots in the body, but a black rosette is present, which is difficult to observe.

They are also meat-loving carnivores. Their food preference is much like their close relatives (leopards and jaguars).

They prefer to eat deer, buffaloes, and antelopes, although they are also found hunting hares, reptiles, and small rodents.

Fighting Strategy and Strengths of Panthers

Their strength depends upon whether they are leopards or jaguars. Both cats are strong, but jaguars are slightly larger and stronger than leopards.

Jaguars have the strongest jaw muscles among all big cats, and consequently, their bite force is also the highest, at a staggering 1500 PSI, which is more than a tiger and more than double of a lion.

The bite of a leopard is considerably weaker at 310 PSI.

Their hunting style is a bit similar to tigers, grabbing the prey with their claws while using strong jaws to suffocate it to death or piercing its neck.

Climbing and Swimming Abilities of Panthers

Black panthers are excellent climbers. They usually remain on trees and wait for their prey to come in the shade.

They can also jump up to 18 ft (5.5 m) upward. So even prey at the treetops is not safe from panthers.

They are also excellent swimmers and can chase their prey in the water also.

This “ghost of the jungle” has excellent night vision.

Although they usually attack and hunt in the twilight of dawn or dusk, their excellent night vision enables them to attack in the dark if needed.

A dark body acts as a camouflage in the darkness.

A poor prey animal searching for some resting place may find itself in the jaws of a black panther.

Who Wins in a Fight Between a Tiger and a Panther?

Can these wild cats fight each other?

But why would they fight?

Although their geographical habitats rarely match, the competition for food and space can pit a tiger against a panther.

As none of them is the favored food of others, the battle may end up withdrawing from both sides.

The panther is too smart to fight another big cat while enjoying plenty of prey by attacking from the sky.

However, what would happen if the panther decides to stand and challenge the hegemony of the tigers?

In such battles, the tiger has an advantage due to its sheer size and strength, stronger claws, stronger canine teeth, excellent defensive maneuverability, jumping ability, and thick fur-laden skin, protecting against bites.

On the other hand, the panther enjoys some advantages over the tiger, like stronger bite force (if it’s a black jaguar), camouflaging abilities in the darkness, and a useful ability to jump up into the trees.

They can easily avoid the tiger by climbing up nearby trees when they feel they are losing. Smaller size means more maneuverability.

They are considerably faster runners than tigers and can outmaneuver the slow and massive tiger easily.

What Does a Fight Between a Tiger and a Panther Look Like?

Who is likely to emerge victoriously?

After reviewing their relative advantages, we are in a position to predict accurately.

Size in a fight is a great advantage.

The panther is much smaller than a tiger, and the tiger is more massive.

Greater size, however, usually comes at the expense of low maneuverability.

Tigers, however, are unique in the sense that their size doesn’t compromise their strength, agility, and maneuverability.

They are all-weather master hunters.

Although the bite force of a black panther is greater, the size, superior intelligence, and stronger musculature of a tiger will win the day for him.

In a fight in open terrain and open field, the tiger is most likely to emerge victoriously.

The panther can hide in the darkness and try a rapid ambush on the tiger.

Despite the success of such an adventure, the tiger is unlikely to suffer any lethal injuries.

Once the element of surprise is over, the battle will eventually tilt in favor of the tiger as the sheer size and strength of a tiger is something a black panther can’t hope to match.

Therefore, the tiger will likely retain the upper hand even in the thicket with the panther’s surprise.

Can a Panther Kill a Tiger?

So does it mean that the battle is one-sided and the tiger is absolutely in no danger? This is not the case.

The black panther is also a big strong cat with equal or even stronger jaw and bite force to deliver severe and even fatal injuries to the tiger.

In an open confrontation, the panther will probably leave the battlefield as the big cats usually avoid tough targets.

However, if all escape doors are closed and the battle becomes a fight to the death, the outcome can be difficult to predict.

The panther can deliver fatal injuries to the tiger even if losing.

The injured tiger will probably die of bleeding from these injuries or develop serious infections leading to death.