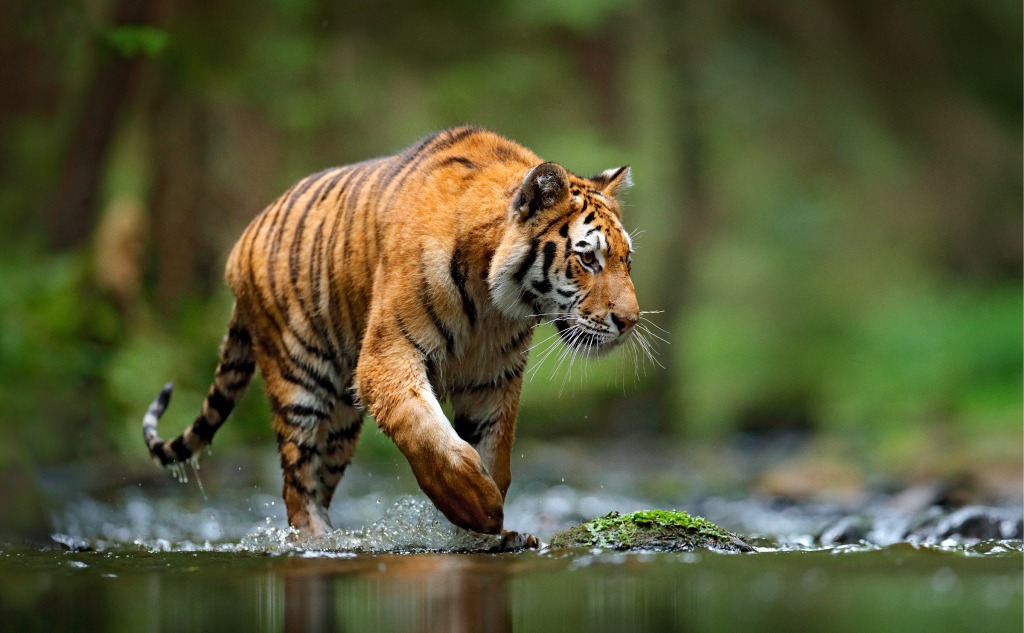 Here’s who wins in a fight between a tiger and a python.

A python cannot handle an adult tiger effectively and has got almost no chance to win in a fight.

But in the water, the chances are improved for a victory of the python, but it’s still very hard and not possible without a heavy price.

If you want to know all the details who wins in a fight between a tiger and a python, then you’re in the right place.

What Pythons Are There?

Pythons are a genus of huge, non-venomous snakes native to Saharan Africa, the Indian subcontinent, and other South Asia.

Along with their use for making bags and belts, these non-venomous fellows are also popular as pets as well.

The representatives of this genus include:

For convenience, much of our talk will be related to Rock pythons (African or Indian) and Reticulated pythons.

What Are the Physical Characteristics of Pythons?

Although a bit shorter than reticulated pythons, the African rock pythons with weights of 44-55 kg are the heaviest python species.

Of course, I am not talking about anacondas as they are not pythons.

The colors of pythons vary according to habitat, including brown, chestnut, olive grayish, and some other uncommon colors.

Their thick skin is covered with smooth, small scales joined in an irregular stripe pattern.

They have a triangular head, labial pits to sense in the lower lip, extremely stretchable jaws, a number of backward directed teeth arranged in 6 rows, and leg-like non-functional spurs that relate them to lizards as their evolutionary ancestors, and it is speculated that they may be able to develop fully functional legs again.

Most python populations are native to Africa and South Asia, but some python species were exported to the US and other parts of the world on account of the pet trade and now appear to be invasive over there.

What Is the Diet of Pythons?

All pythons are ambush hunters and kill their prey by constricting coils around them.

They weigh their prey to reach within their range, grab it by their jaws, and form coils around it.

Pythons constrict with a crushing force leading to cardiac arrest of the feared prey.

They eat small mammals like mice, bats, and small civets or even larger prey species like deer, antelopes, dogs, warthogs, and sometimes hyenas as well.

They can eat cubs of big cats and small crocodiles as well.

A python kills by constriction and swallows its prey all over. Due to the flexibility of its jaws, a python can swallow a prey 3 times wider than its own mouth and can open its jaws to 180 degrees.

How Do Pythons Reproduce?

Pythons lay large-sized eggs in a large number, and females coil around them to protect.

They are cold-blooded animals, but the female warms its body by rhythmic contractions of body muscles and incubates the eggs.

The average gestation period is of 84-90 days.

What Are the Behaviors of Pythons?

Pythons are sneaky, aggressive, non-venomous predators, but they do become lazy after eating.

They engulf their prey as a whole and take several weeks to digest it.

During that period, a python moves slowly and spends most of the time resting.

They don’t attack other predators unless threatened or very hungry, which is rare. Reticulated pythons have a history of attacking humans.

Enough of the python introduction though, let’s get to the tiger.

Tigers are the largest felids and are the most dangerous of all cats.

With a beautiful and strong body, amazing speed, strong paws, sharp claws, and strong hunting instincts, a tiger can charge on anything made up of flesh, even if it is a python.

What Are the Physical Characters of a Tiger?

A size (length) ranging 8-12 ft, weight range of 90-300 kg, a well-developed muscular body, double-layered fur with a beautiful camouflaging striped pattern, razor-sharp claws of up to 4 inches, and a beautiful mane-like head of hair are some representative characteristics of a tiger.

Tigers have a strong biting force reaching 1200 PSI that can crush any living thing coming their way. For comparison, a human punch generates around 120-150 psi.

What Is the Habitat of Tigers?

Tigers are restricted to only 7% of their original geographical habitat due to humans occupying the area.

Tigers dwelling in the savannahs, forests, woodland and grasslands, and Mangrove swamps of India and Alaska, and some parts of China.

What Is the Diet of Tigers?

Tigers, like pythons, are exclusive carnivores and hunt down almost anything from small rabbits and birds to large bison, crocodiles and even make attempts on elephants and rhinos but rarely.

Their digestive system has the ability to digest bones, hooves, hairs, and sometimes teeth as well.

They are ambush hunters, sneaking near their prey and snapping its neck with a powerful, speedy attack.

How Do Tigers Reproduce?

Tigers breed throughout the year, with males and females living together only for mating.

The gestation period is approximately 93-112 days, and 2-3 cubs are produced.

The female nourishes and protects the young ones from predators and even other male tigers. Tigers reach sexual maturity at 4-5 years of age.

What Is the Behavior of Tigers?

Tigers are highly aggressive creatures with the instinct to attack anything made up of flesh. They are solitary animals and live and hunt alone.

They are territorial and regularly mark and patrol their territories.

A male tiger can eat or kill the young male cubs, and the juveniles have to snatch the territory from the old or injured males.

Can a Fight Between a Tiger and a Python Happen in Reality?

Big cats attack pythons and are successful many times.

On the other hand, pythons too can attack the young of big cats.

So a fight between the two predators here is mostly to survive against each other.

They will only attack a tiger when they feel threatened.

How Would a Tiger and Python Approach a Fight?

The attacking technique of a tiger (a strong deep bite on the neck leading to strangling and death of its prey) would not be of its usual value in its fight with a python.

As the python skull and girth are very small compared to the other prey of tigers, the accuracy of an attack on the neck would not be very good, and the chances are that the tiger would hurt itself.

Moreover, as the tiger goes for the skull, the python can coil around, strangling him.

Here, it is better to injure the snake with sharp claws as much as possible and avoid the coiling of the snake, and tigers can mostly do that.

On the other hand, pythons have only one way of protecting themselves; avoid the razor-sharp claws of the tiger and coil around quickly.

The python cannot leave the fight due to its slow speed, but it can hide in a nearby burrow if possible.

If he succeeds in coiling around the big fellow, he may have a chance.

Who Would Win in a Fight Between a Tiger and a Python?

During the fight, a tiger uses its strong claws to make as many cuts on the python’s skin as possible.

If the fight is prolonged, it helps the tiger here because it’s not a matter of stamina now.

Even if the python wraps around the tiger, it may still jump and strike the snake here and there, inflicting more injuries.

If it is a tiger cub or a small adult, they may not get free from the strangling coils but messing with an adult tiger, the tiger may flee, and then the python has no chance of killing it.

Could a Python Defeat a Tiger in the Water?

A python’s speed and maneuver are improved in water, and the tiger becomes slow.

To use its tactics, a tiger needs a solid footing that is not available in the water.

Moreover, if a python traps the tiger inside water, it would not be possible for a tiger to move faster and get freed.

He may drown as well.