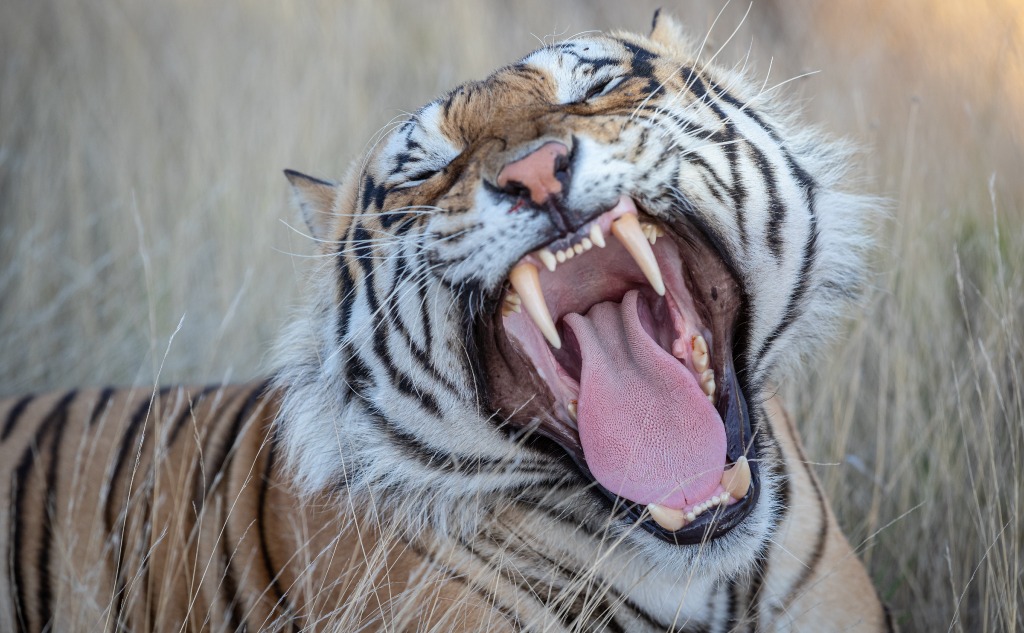 Here’s whether a tiger can lick your skin off:

Yes, a tiger can lick your skin off with just a few swings of his rough tongue.

But that’s only if the animal decides to hurt you.

A friendly tiger lick won’t do you any harm except when the same area of skin is continuously exposed to tiger tongue bards.

Luckily for you, nothing serious will happen if your friendly neighborhood tiger approaches and decides to lick you as a way of saying good morning.

What Is a Tiger’s Tongue Made Of?

One test was performed using scanning electron micrographs to visualize the surface of the tongues of cats.

The results showed that there are numerous papillary formations that are identical in shape.

A tiger’s front half of the tongue contains large filiform (threadlike) papillae.

They are all made of rigid keratin, a structural protein mostly found in nails and outer layers of skin and hair.

The front half spreads from the tip of the tongue to the mid-section.

The back half spreading from the middle of the tongue to the throat has softer papillae more densely aligned than the rigid ones.

The tongue barbs on the front of the tongue have a U-shaped cavity on their upper side.

According to one study, after a cat was left to lick a piece of pork for a few minutes, there were chunks of it found inside the barbs.

You may find some older literature that states that the filiform papillae on a cat’s tongue are conical instead of hollow, but that’s not correct.

Aside from the cavity inside the upper part of the papillae, there is also a bottom cavity that secures the barb to the tongue’s tissue.

There is a vast difference in size and, to some point, attitude in different species of domestic and wild cat, but the shape and size of the rigid papillae are always constant.

Can you believe that your domestic cat has an almost identical tongue to the average Bengal tiger?

How Do Tigers Clean Themselves?

Like most of their feline counterparts, tigers are very clean animals. They mind dirt so much that they never take the meat of their prey inside their dens.

It’s also almost impossible for a tiger to defecate or urinate in the water source they are using for drinking and bathing.

All cats are very strict in means of toilet duties. In captivity, they move far away from the sleeping area to do their dirty deeds.

Even though tigers spend a lot of time in the water, the action is mostly for cooling and lowering the body temperature.

The most important part of their hygiene is self-grooming. As meticulous as they get about their hair, tigers spend a lot of their time licking their fur thoroughly.

It’s more than just getting their bodies wet because the tongue is specifically designed for in-depth cleaning.

Both domestic and wild cats invest almost 25% of their time in intensive grooming. This action allows them to remove odors and loose fur, regulate body temperature, redistribute skin and hair oils, and even bond with other cats.

The hollow top cavity of the tiger’s tongue bars can wick up fluid like a straw using surface tension (the liquid doesn’t have anywhere else to go except inside).

Single papillae can hold up to 0.014 µl of saliva (or other fluid).

The total number of papillae being 290, a single lick can transfer approximately 4.1 µl of fluid. That’s approximately one-tenth of a drop from an eyedropper.

It’s not a large volume of fluid, but the main purpose of the filiform papillae is to transport the saliva to areas where the surface of the tongue alone can’t.

The hairs penetrate inside the saliva-filled cavity and become coated when the tiger licks itself.

A tiger’s coat is mostly comprised of air which provides strong insulation.

When the tongue is pressed down on the fur, the air is evacuated, and the hairs clump together.

The papillae on the tongue are long enough to reach even to the surface of the skin when fully erect.

Keep in mind that not all cats are groomable.

The Persian domestic cat doesn’t have long enough papillae to reach through its long fur and touch the outer layer of the skin.

Lack of grooming can lead to matted and tangled fur, painful skin tugging, and in some cases, skin infection.

Tigers and other cats only use the front part of the tongue for grooming, where the rigid papillae can be found.

There are 4 phases of self-grooming in Tigers.

At first, the tiger extends its tongue out from the mouth. During the second phase, the tongue is expanded to the side while becoming stiff and rigid.

Afterward, the tiger sweeps the tongue through the hair, and finally, it retracts in a U-shaped form.

During the second phase of expansion and stiffening, the tongue barbs rotate until their position is perpendicular (90 degrees, perfect L) to the tongue’s surface.

This motion makes it possible for the barbs to stay erect to increase the tiger’s fur’s contact area.

After the tiger licks its fur, the surface tension makes the hair clump together. Although the papillae on the tongue carry less than 5% of the tongue’s saliva volume, their height is enough to pass through to clumped hairs and moisten the dry ones beneath.

That would be impossible if the tongue is smooth.

Licking and Wound-Healing in Tigers

Living in the wild means getting in all kinds of troubles and coming back to your den with many wounds.

In this case, the tiger’s tongue is used to deliver a special disinfectant to the injury site and prevent infections from developing.

And what antiseptic solution might that be? – You guessed it, it’s the saliva. The tiger’s saliva has more than a handful of healing properties.

Gram-positive bacteria are destroyed by peroxidase and lysozyme while the rest are sensitive to cystatins, defensins, and lactoferrin, all of which are compounds found in the tiger’s saliva.

Thrombospondin is a compound that deals with viruses, and there are also some growth factors and proteins in the saliva that promote healing and act as painkillers.

How Do the Tongue Barbs Help With Flesh Consumption?

Tigers don’t use the barbs on their tongues just for grooming and healing.

Their tongues are rough so that they can scrape away skin and muscle in just a few bites. All wild cats can pick a bone clean just by intensively licking it.

If the meat is too hard, a tiger will use its tongue to tenderize it, thus making it tastier and easier for consumption.

But don’t be too afraid just yet. If their licking is all that harmful, they would also self-mutilate pretty easily by grooming.

A tiger uses different angles and forces with its tongue for different purposes.

This intelligent animal can make use of the sandpaper in his mouth according to the actual situation and need.

How Do Tigers Use Their Tongues to Drink Water?

A popular belief is that felines drink water the same way dogs do. This will surprise you, but the mechanism of drinking is different in both species.

When a dog curls its tongue in a ladle shape only to scoop out the water, it messes all over its face and around the water bowl.

Have you noticed that cats don’t make such a mess?

The reason for this is because even though domestic and wild cats do curl the tongue a little bit, they only use the tip of their tongues to touch the water and draw the content as quickly as possible back up their mouths.

Tigers must know the exact moments when to retract their tongues and close their mouths before gravity drags the liquid back to the source.

Even though domestic cats perform this movement a lot faster, tigers also manage to keep themselves clean and possibly consume more water in one sip because of their larger tongues.

Tigers are the largest cats and the third largest carnivores on the planet. There are few subspecies of tigers, and the size of each depends on climate, habitat, food, and prey.

All tiger subspecies are native to the Asian continent, and there are 6 of them:

Such elegant gait, dynamic movement, and naughty demeanor are the result of a tiger’s highly developed hunting anatomy.

Being on the top of the food chain, they are sometimes referred to as super-predators.

Anatomically these animals have more than 600 muscles. Along with the strong bone structure, the kill while jumping on the prey is imminent.

One of those many muscles is the tongue, which plays a great role in making the tiger special.

Even though cats existed for 11 million years, the first study on tongue barbs or papillae in cats was conducted just 40 years ago.

The specimens were domestic cats since it’s almost impossible to come to a wild cat specimen without endangering its well-being.