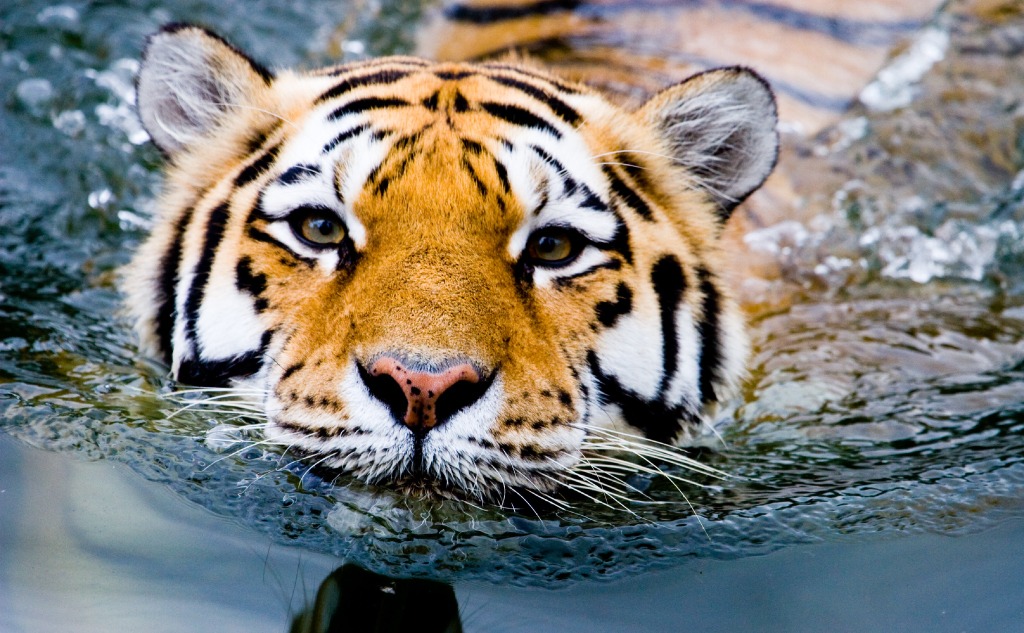 Here’s why tigers swim while cats are afraid of water:

Tigers are raised to love water and use it to cool off, much like humans do.

Tigers need to be strong swimmers to catch prey in the jungle.

Domestic cats might be afraid of water because of their heavy fur coats, sensitiveness to smell, they feeling cold, and accidents.

If you want to learn all about why tigers swim while most domestic cat’s don’t, then you’re in the right place

Why Do Cats Hate Water?

Cats don’t like getting wet because of what water does to their fur.

Cats are hyper fastidious animals that live a great deal of their day grooming by themselves.

If your cat is long-haired and they start swimming, their fur coat may become too heavy.

Wet fur is not comfortable for a cat and often takes a long time to dry.

Cats are greatly sensitive to odor.

They sense the chemicals, especially in tap water, which is why your cat won’t usually drink tap water either.

One explanation for why your cat may hate water is because their body temperature drops very fast.

Accidentally falling into a full bathtub, for example, can be a frightening experience for a cat and can make it avoid water for the rest of its life.

Do All Domestic Cats Hate Water?

Why Do Tigers Love to Swim?

Unlike domestic cats, larger types enjoy spending their leisure time in the water, and they like to swim for many hours.

From when they’re cubs, female tigers encourage them to learn to swim, even if these cubs will get killed in the water. But surprisingly, adults can swim for several kilometers.

Though most cats show disinterest in water, tigers love taking baths from rivers and lakes. That will help keep their body wet and colder during the dry seasons and hot parts of the day.

Once they come back to dry land, the admixture of the wetness and the wind patterns gives a blessed cooling effect on the tiger’s body.

If it begins to wear off, they just keep on doing the process. They’ll submerge their body partly in nearby lakes and streams, soaking for up to an hour.

The major cause for tigers to swim is to cool off. They spend most of their day relaxing in the water since they catch their prey at night.

As the largest species in the big cat family, tigers have more surface area that heats up. That is why they swim for joy.

Likewise, smaller cats such as domesticated ones living in our homes might dislike getting their fur wet since it would make them cold in a discomforting manner.

Can Tigers Swim Underwater Too?

Tigers are great swimmers and would not avoid water. But swimming tigers will submerge their body (but not go completely underwater).

The big cats generally dislike getting water into their eyes, so they get in water up to their necks.

Are Tigers the Only Wild Cats That Like Water?

Warm climate species, including jaguars and lions, will spend their leisure time in the water and swim only when they want to. Therefore, tigers are not the only big cats that swim.

Lions, leopards and cheetahs, and many other mammals can swim too. The ability to swim is different from being able to swim well.

Most of the big cats in the cat family used to avoid water as they were adapted to catch their prey on land.

On the other hand, tigers live in green tropical jungles with lots of wide rivers. Prey animals in forests do not form pretty convenient herds, so tigers have to chase for their food.

Tigers can have large boundaries, and swimming across rivers is a big advantage that came up for them during evolution.

Tigers are capable of swimming rivers as wide as seven kilometers across and might swim up to 29 kilometers per day as they patrol their territory.

How Can You Expose Your Cat to Water?

Important guidelines when exposing your cat to water:

1. Put the kitten in an empty sink and allow them to play with their favorite toy there.

Talk gently to him and make the time in the tub or sink fun. Do this for several days and months. Use a positive base and offer treats of food during the entire process.

2. After they are comfortable in a dry sink, you can start rubbing them out with a wet washcloth.

3. Then, add a little bit of water at room temperature to the ground of the sink and put them in, letting them feel it on their feet.

It may add great enthusiasm if you put their favorite toy in with them.

4. Once they are fine with the washcloth and water in the sink, you can use a cup to wet them gently.

Use cat-safe products to rinse them thoroughly.

5. Take your time and talk politely to the cat throughout.

After the bath, wrap them in a fluffy towel and dry them off as much as possible.

Following the above steps will make your cat’s exposure to water easier on you and less stressful for them.

To make your cat familiar with water, the easiest way is to start when they’re still a kitten.

Kittens that grow up in the presence of water will not get scared of water and may even learn to swim in the water.

They won’t get scared if they’re used to water, so these young cats won’t get frightened as easily as full-grown cats.

Why Do Cats Hate Water but Still Like Fish in Water?

If you have a cat and fish at your home, you may find your cat sitting and staring at the fish in the aquarium.

Cats are opportunistic feeders, and they have been around humans for thousands of years and eat their leftovers.

Cats are obligate carnivores which means that they must eat mainly meat as their main food source, and they don’t need a lot of carbs in their diet.

However, a smaller number of fruits, vegetables, and grains can be given.

Because of that, cats need food containing high concentrations of taurine, which is primarily found in the muscles, heart, and liver of animals.