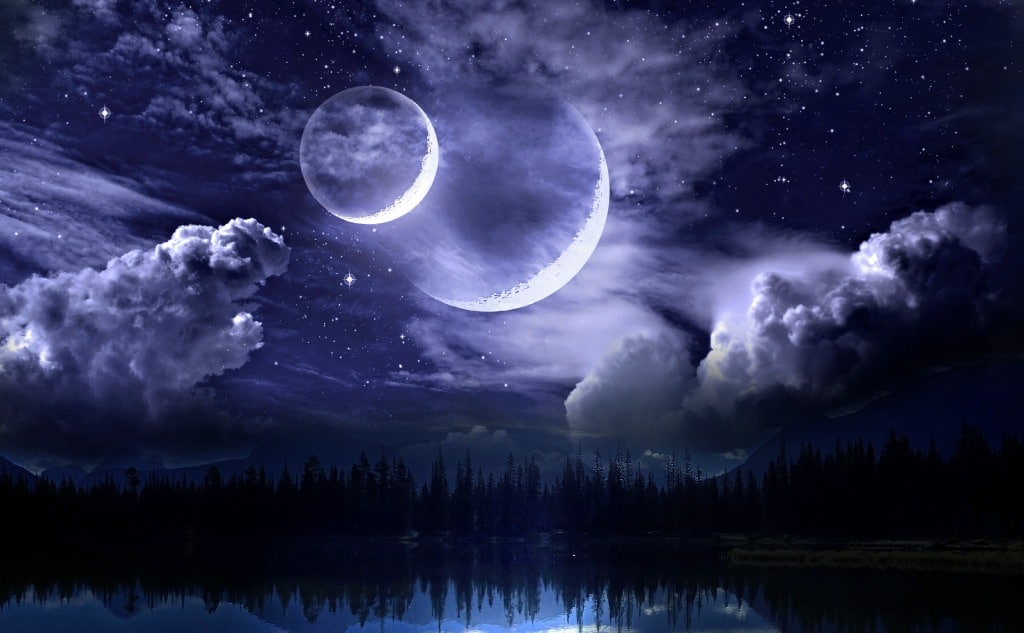 Here are 10 things that would happen if we had two moons.

How about increased crime rates?

So if you want to learn 10 things that would happen if the Moon cloned itself, then you’re in the right place.

10 Things That Would Happen if We Had Two Moons

But, what would happen if we had two moons?

Unfortunately, most impacts would be shocking and would likely be the cause of mass extinction on Earth.

However, there are a couple positive outcomes sprinkled in.

We are assuming that the new Moon is around the same size as our current Moon for this list.

Without further ado, here are the top 10 most significant impacts that would happen if we had two Moons.

If we had two Moons, there would obviously be twice as much moonlight.

Plus, the two Moons would likely rise and set at different times, causing much fewer dark hours.

Because of this, nocturnal creatures would behave much differently. Nighttime hunters would see prey much more easily.

Therefore, this would cause a biological need for nighttime prey to increase their camouflage.

Eventually, the need to survive would become much greater. This would likely cause predators and prey to become much more intelligent and savvy.

Tidal friction is the process of the Moon’s gravity slowing the Earth down ever so slightly.

Picture your finger barely touching a spinning basketball. If we had two Moons, tidal friction would gradually increase over very long periods of time.

Ultimately, this could cause drastically longer seasons and some extreme effects.

One could be that deserts are receiving more rain, becoming more fertile. Or, the opposite, in which fertile forests could dry up, becoming barren deserts.

On a lighter note, if we had two Moons, we would have twice as many eclipses.

The eclipses would vary depending on where the new Moon sat (between Earth or beyond our current Moon).

Fortunately, eclipses are simply a visual enjoyment for humans, and they have no impact on living conditions.

If we had two Moons, the tide is far and away from the greatest impact.

With two Moons tugging on Earth and causing ripple effects, tides would turn completely chaotic. Because of this, shorelines would rapidly erode, causing seaside buildings to be destroyed.

Therefore, major cities like San Francisco and New York would be in grave danger.

Now, with seaside dangers from our new tides, new innovations for gathering water would be necessary.

If we had two Moons, seaside buildings would constantly be destroyed by wild tides.

And, since close proximity is needed for sewage and other water systems, we would be forced to reinvent these processes.

If we had two Moons, our long-lived concept of a calendar month is now useless.

Now, the brilliant monitoring of ancient civilizations and tribes would be unnecessary now.

Rather, we would be forced to adopt a mixture of short and long months.

If we had two Moons, the tidal impacts would be devastating.

Gravity from two Moons tugging on the Earth would create double the ripple effect.

And, the outcomes of this would be tsunamis, earthquakes, volcanoes, and other natural disasters.

Obviously, this would spell a tragic end to most life on Earth.

If we had two Moons, we would also have two “high tides” per day. Yet, this would not be the bonus to surfers that it may seem.

Ultimately, this could have severe impacts on:

Several studies over time have found correlations between full Moons and crime rates.

So, if we had two Moons, theoretically, these crime rate spikes could double.

Violent crimes, property theft, and more could swell throughout the months.

Finally, there would be several situations in which the two Moons could collide with one another. If this were to occur, it would mean mass extinction for all life on Earth.

Finally, no matter what, the collision would create a gigantic cloak of debris, wiping out life on Earth.

Immediately, plants, animals, and humans would all freeze and cease to exist.

We are familiar with this outcome through theories of how the dinosaurs became extinct millions of years ago.