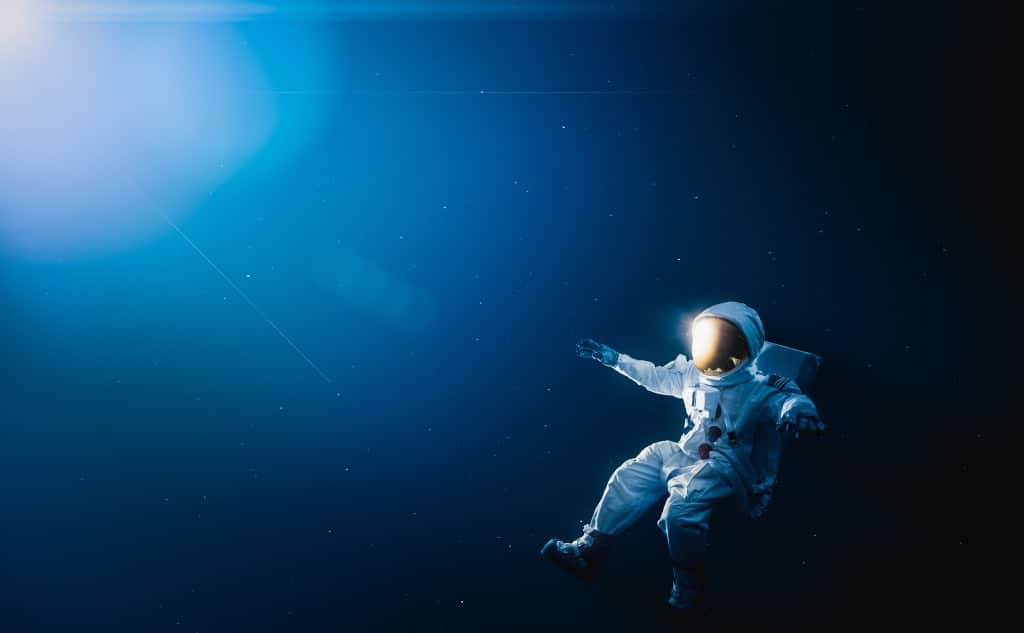 These are 15 unsolved space mysteries.

From what white holes are to how life began.

So if you want to learn 15 unsolved mysteries of our universe, then this article is for you.

15 Unsolved Mysteries of Our Universe

Even with all of the incredible technology at our disposal today, the universe is a complex and largely unknown realm.

Armed with far more questions than answers, science constantly battles to understand more about the existence of it all.

These are 15 of the least-understood, most mind-boggling, and bazaar unsolved space mysteries:

#1 Why Is Uranus Tilted?

First of all, we were unable to find a not awkward way to draft this title.

There, we said it. Now, one of the great unsolved space mysteries is right in our own cosmic backyard.

Planet Uranus is extremely tilted on its axis. Sure, all planets have some axial tilting.

For instance, Earth is tilted 23.5º away from the Sun. But, Uranus is tremendously tilted, at just shy of 98º.

Science has yet to explain this tilt accurately, but we do know that it must have been the result of a brutal collision.

And, this collision must have occurred when Uranus was still a baby.

We know this because the planets Moons also orbit around this tilted plane, hinting that the collision happened prior to the satellites coalescing into existence.

Similar to Earth, the Sun has an atmosphere.

However, the Sun’s atmosphere is much hotter by factors of thousands.

The biggest layer of the Sun’s atmosphere is called the Corona.

One of the biggest unsolved space mysteries is why the Corona is so much hotter than the Sun’s surface below.

And, it’s not just a little warmer. It’s hundreds of times more scorching at millions of degrees Fahrenheit.

This would be like the air surrounding a campfire being hundreds of times hotter than the actual flames of the fire.

#3 How Do Supernovas Happen?

When a star runs out of its nuclear fuel, its own strong gravity wins, and the star collapses on itself.

The result of this is a violent explosion known as a supernova.

Now, in modern science, we know a rather healthy amount about these blasts.

But, our current technology does not allow us to see the insides of stars.

Because of this lack of insight, what occurs inside of a star as a supernova takes place is one of the currently unsolved space mysteries.

#4 How Do “Hot Jupiters” Get so Close to Their Stars?

Hot Jupiters are an exotic class of large exoplanets, similar in size and composition to our giant, Jupiter.

Yet, they remain one of the great unsolved space mysteries because they orbit remarkably close to their Sun.

Planets of this gaseous composition are unable to form so close to a star.

So, what caused these mysterious giants to cuddle up?

Though we still do not know for sure, astronomers believe some type of collision knocks the planets into irregular orbits, like comets.

Eventually, the star’s powerful gravity may lasso the planets into a tight, searing, and deadly orbit.

Arguably, Jupiter’s most notable feature is also one of the biggest unsolved space mysteries.

Big enough to house over three Earths, the storm has been raging on for at least 400 years now.

Although scientists know some storm characteristics, they have little to no explanation for its causes, let alone how it has been churning for so long now.

Plus, our study time is slowly running out, as we know that the storm is gradually shrinking.

#6 What Are White Holes, and Are They Real?

Among Einstein’s litany of staggeringly brilliant predictions are what is referred to as a white hole.

The mathematics of his renowned Theory of General Relativity state that the polar opposite of a black hole must exist.

In other words, these are regions of space where infinite amounts of mass burst out from points of seemingly nothing.

Now, modern technology has allowed us to confirm the existence of black holes, including at the heart of our own galaxy.

However, white holes remain an unsolved space mystery because, well …where are they?

Yet, the hunt continues, if nothing else, because Einstein was rarely proven wrong, even long after his death.

After all, we just confirmed gravitational waves 100 years after he predicted them.

#7 Are There Multiple Universes?

The concept of the multiverse has been the plotline of countless sci-fi flicks.

And, while it’s fabulous film and literature fodder, it’s also one of the biggest unsolved space mysteries.

No surprise, the internet is riddled with potential theories, scientific and far-fetched alike.

Yet, science can barely wager a guess at whether or not this may be true.

After all, we have hardly even broken the ice with figuring out our own solar system, let alone space on the universal scale.

However, we know for sure that we exist in a likely infinite world, and multiple universes are anything but written off.

#8 How Are Galaxies Formed?

Scientists now have some ideas as to how planets, stars, and several other astronomical objects are formed.

Yet, one of the most sought-after and yet unsolved space mysteries is how galaxies are formed.

It coalesced to form these large whirling collections of stars, solar systems, dust, and more in the early universe when matter came to be.

But, even though there are thought to be hundreds of billions of galaxies, science has no answer for how they were created.

#9 If the Universe Is Infinite, Then Were Is Everybody Else?

Basically, just our own galaxy contains around 400 billion stars.

Supposedly, around 20 billion of those are stars similar to our own Sun.

Now, it is thought confidently that 1/5 of these Sun-like stars have an Earth-like planet in their habitable zone.

Therefore, if even just 0.1% of these planets harbor life, our galaxy alone would have 1 billion planets with life on them.

So, where is everybody else?

This is known as the Fermi Paradox.

Right now, we have zero evidence of life beyond Earth.

Are lifeforms outside of Earth trying to send us signals, like we are them?

Do they not want to interact with us?

Or, are we, in fact, all alone in this vast universe?

It may be a long time or forever until we know the answer to these questions.

But, one thing is for sure, life outside of planet Earth is one of the greatest unsolved space mysteries of all.

#10 What Are Gamma Ray Bursts?

Gamma rays are the most powerful wavelength of energy.

On the other hand, gamma-ray bursts are short-lived and incredibly powerful blasts of this strong energy.

In fact, these are the most powerful known explosions in our entire universe.

These bursts were accidentally detected in the 1970s while monitoring near-Earth space to prevent Russian nuclear testing.

Now, we detect at least one of these massively powerful explosions each day.

Yet, the cause of these ominous blowups is still one of the biggest unsolved space mysteries.

Because they typically only occur for fractions of seconds, astronomers have little chance of tracing their sudden origins.

Though not concretely proven, scientists now believe gamma-ray bursts to be remnant blasts from gigantic stars going supernova in the young infant universe.

During the 1990s, complex and accurate scientific models were used to measure the overall composition of the universe.

And, the results caused one of the greatest unsolved space mysteries, dark matter.

Models indicated that all visible matter (called baryonic matter) only comprised less than 5% of the known universe.

In other words, all matter that we know, stars, planets, galaxies, and everything else, is only roughly 5%.

And, a staggering 27% of the universe is made of this invisible and yet unidentified material.

So, what is dark matter? This is the currently unsolved mystery.

Now, it is widely accepted that whatever the mystery substance is, it does not emit any light.

Also, it is quite clear that dark matter does not interact at all with our normal, visible matter.

Obviously, we know that our universe is expanding.

But, like all expansion, it should gradually slow down and eventually contract back inward, right?

Scientists have come to learn that not only is the universe still expanding, but it’s also speeding up.

This yet unidentified energetic force referred to as dark energy is the culprit.

Plus, this energy is nothing to shake a stick at. Aside from rapidly speeding up the universe’s expansion, it is the majority shareholder for the universe’s composition.

Research tells us that a whopping 68% of the known universe is made of this elusive, invisible energy.

However, why it’s expanding faster is easily one of the biggest unsolved space mysteries.

The most recent mathematical attempt to this dark space energy was proven VERY wrong.

Needless to say, this remains a wildly unsolved mystery.

#13 Where Have All the Mission Baryons Gone?

Baryons are particles of the “regular” matter that we are familiar with (see #5 and #4).

Observations of the very young infant universe have shown us, rather accurately, how much and what type of matter was present.

On the other hand, current measurements show us quite accurately that around half of this matter is unaccounted for in today’s universe.

Then, where has this baryonic matter gone?

That is one of the currently unsolved space mysteries.

Now, there are several theories as to where it might have gone.

One postulates that it is hidden within the interiors of stars.

Ultimately, we still have very few clues as to where this matter has gone.

When the universe was born, it was a scorching-hot opaque stew.

And, right as this so-called stew was created, both matter and antimatter were born.

Clearly, matter is the stuff that makes up everything we have ever known.

Antimatter, alternatively, is the evil twin of normal matter, for lack of a better term.

When these two interact, they instantly destroy one another and are both dead.

Easily, one of the greatest unsolved space mysteries is why regular matter won the initial battle.

When the two twins initially faced off, what caused normal matter to win the fight and go on to create galaxies, stars, and everything else?

Or, better yet, did the universe somehow intentionally create more regular matter than antimatter?

Finally, what is the purpose of either or both?

How did life originally come to be?

The answer to this mystery would unlock the answers to everything.

Why you were born.

How I am sitting here writing this list for you to read.

Could, or does life exist outside of Earth?

Now, there are countless theories of how life was created, no single theory any more or less credible than the next.

However, what makes this the single greatest unsolved space mystery is that in all theories, there exists the lingering question: Then, what came before that?

Ultimately, we are fortunate to be here. And, it would be a genuine waste not to appreciate every single moment of that luxury.