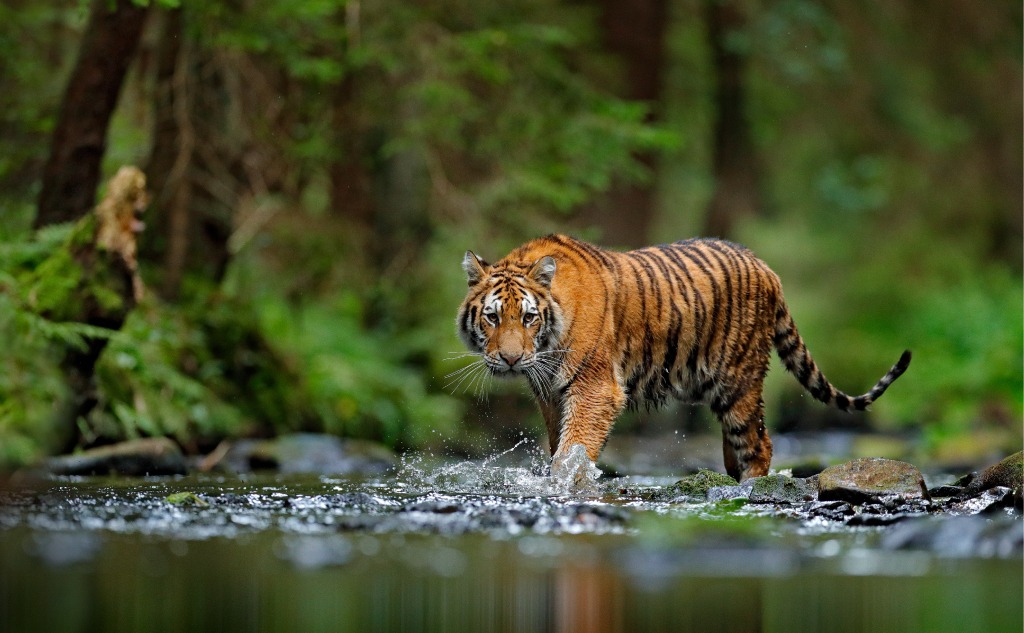 Here’s what tiger are afraid of:

Tigers, like the majority of animals, are terrified of fire.

The use of fire to keep tigers at bay has been practiced for decades by big cat “tamers.”

Tigers are also frightened by strange sounds that they have never heard before.

If you want to know all about what are tiger afraid of, then you’re in the right place.

Are Tigers Afraid of Any Other Animal?

Tigers are usually at the top of the food chain and are classed as apex predators, which means they aren’t scared of any other animals in their natural environment.

In the case of tigers that live within the range of a specific bear species, this is not always the case since they are occasionally killed by bears while vying for food or contesting a kill.

The tiger is a vicious predator that occasionally competes with brown bears for adequate food supplies, and the two species may even come into conflict.

Tigers are capable of killing both bear cubs and adults.

Tigers are also known to prey on Asiatic black bears in some areas of their range.

The sloth bear is a very violent animal, capable of scaring tigers away from the prey that they kill when they are at their most hostile.

What Are Big Threats to Tigers?

The loss of tigers’ natural habitats is a major danger to the survival of the species worldwide.

It was believed at the start of the 20th century that there were 100,000 tigers on the globe.

A further concern stems from the traditional Chinese medicine practice of using components of the tiger.

Even though it is a geographically confined phenomenon, the killing of tigers by mugger crocodiles, pythons, and leopards poses a threat to the tiger population as a whole.

Generally speaking, tigers and other top predators cohabitate through techniques such as hunting at various times of day in order to avoid conflict with one another.

Is It True That Tigers Are Frightened of Humans?

Tigers are usually apprehensive when it comes to people, and they exhibit no affinity for human flesh.

Humans, even though they are relatively simple prey, are not a preferred source of food.

Most man-eating tigers are old, infirm, or lacking teeth, and they prey on humans out of desperation rather than hunger.

What Are the Chances of Tigers Attacking or Killing People?

Tigers prefer to remain to themselves and avoid interactions with people.

In India, where more than 1,700 tigers dwell in the country’s national

parks, the number of humans that have been attacked or killed by tigers is at its highest.

Sometimes tigers are not scared of people in extremely rare instances and may attack or kill if provoked. These may include the following:

Tigers guarding their offspring are continuously on the lookout for humans to attack and kill.

Never approach a tiger cub in the wild since their parents are almost always nearby and ready to strike if the youngster is approached.

When it comes to their cubs, they are fiercely protective (unlike lions, who often kill their young).

In most cases, a tiger will hunt for huge prey once every week, and it can take several days for tigers to get hungry once more.

Given this, a starving or malnourished tiger may leave its normal environment in quest of food, and it will not hesitate to kill in the pursuit of that food.

Their Inability to Hunt Effectively

Tigers that are unable to go after quick animals may consider people to be their only prey.

Old or injured tigers, as well as tigers in their adolescent years who may be unskilled when it comes to hunting, are examples of this type of predator.

Keep to heavily populated regions if you’re traveling to a place where tigers are commonly found.

If you want to view these magnificent creatures, you don’t have to go into the wilderness.

Is It Possible for a Human to Terrify a Tiger?

Humans are grossly underappreciated in terms of how strong we are when we are not armed.

We may not have hair to shield us from scratches and bites, nor do we have claws to slash at our adversaries, but we are still large and muscular apes with great strength.

Is It Possible to Kill a Tiger With Only Your Bare Hands?

Assuming no outside forces are present, there is no way a person could defeat an adult tiger in a battle using only his or her own hands.

Humans do not have the necessary strength and speed in the correct proportions to inflict serious injury on a 600lb adult tiger of any size.

Yes, they can smell humans.

Due to the fact that scent is less keen than some of its other senses, the tiger’s sense of smell is typically not employed for hunting.

They have a limited number of odor-detecting cells in their nose and a decreased olfactory area in their brain, which allows them to distinguish between different odors, but not as well as some other big cats.

Is It Possible to Survive a Tiger Attack?

Tigers are very powerful, swift, and hefty predators. In reality it is tough to survive a tiger attack.

However, it is conceivable for a person to survive an attack of this nature one in a thousand times.

If you were to use a computer program to mimic a tiger assault and replay the scenario several thousand times, ultimately, the human would have to win at least one of the attacks.

Are Tigers Afraid Of Elephants?

Tigers and elephants are frequently found living side by side in southern India.

While tigers are not often attracted to elephants because of their size, they have been observed killing elephant babies.

As a result, elephants are cautious about tigers. You might use the sound of furious tigers to frighten elephants away.

Can A Gorilla Kill A Tiger?

No, or at least not easily. However, the size of the tiger and gorilla is also a consideration.

If both are mature, then it is possible that the gorilla will be able to put up a struggle and may even be able to bite the tiger, but it would be the extent of his offensive.

The gorilla’s broad neck would make it more difficult for the tiger to get his kill shot, but in the end, the tiger would emerge victorious.

What Should You Do if a Tiger Comes up Behind You?

When he attacks you, go as near to him as you possibly can. Don’t give him a chance to catch his breath.

Hugging a tiger might take him completely by surprise. All carnivores want to maintain a safe distance between each other.

The fact that tigers snarl at each other and avoid excess physical contact when mating shows that they prefer to maintain a safe distance between themselves.

Which Is More Powerful, the Lion or the Tiger?

According to recent studies, the tiger is undoubtedly physically stronger than the lion in terms of physical strength.

A tiger is physically larger than a lion, and this is true in most cases. The majority of specialists believe that a Siberian or Bengal tiger would defeat an African lion.

What Is the Best Technique to Frighten Away a Tiger?

If you have access to a firearm, discharge it into the atmosphere. If you have a signal flare, turn it on and keep it in front of you until it goes out.

No, unless the tiger is severely malnourished or his cubs are in dire need of nourishment.

Tigers prey on various large animals, including deer, wild boars, and buffaloes, among other prey items.

Attempting to capture a tiny animal such as a cat will be fruitless for him because the cat will only act as a cookie for him.

What Is It About Tigers That Makes Them So Dangerous?

The fact that tigers are not always afraid of humans is what makes them so deadly.

Our huge minds allow humans to do things that might appear menacing and terrifying to great animals, but the most effective approach to deal with a tiger encounter is to remain as far away as possible from him.

A group of 2–4 female lions would have a similar advantage over a lone tigress in terms of survival and reproduction.

It could be concluded that while a tiger would undoubtedly defeat a lion in a one-on-one confrontation, a lion pride in the wild may hold its own against a lone tiger.

Are Tigers Afraid of Cucumbers?

Tigers are not scared of cucumbers, zucchini, or any of the other items we’ve seen cats leap into the air to avoid in the past.

Regular cats have a shock reaction to unexpected changes in their surroundings, and cucumbers on the floor are certainly unexpected in their environment.

Can Dogs Kill a Tiger?

Although there is no dog that can compete against a tiger in a one-on-one fight, there is a wild dog breed in India’s woods that is called “Dhole” in the local language.

They have been known to hunt tigers in packs, but only when they are starving for food and have no other options.