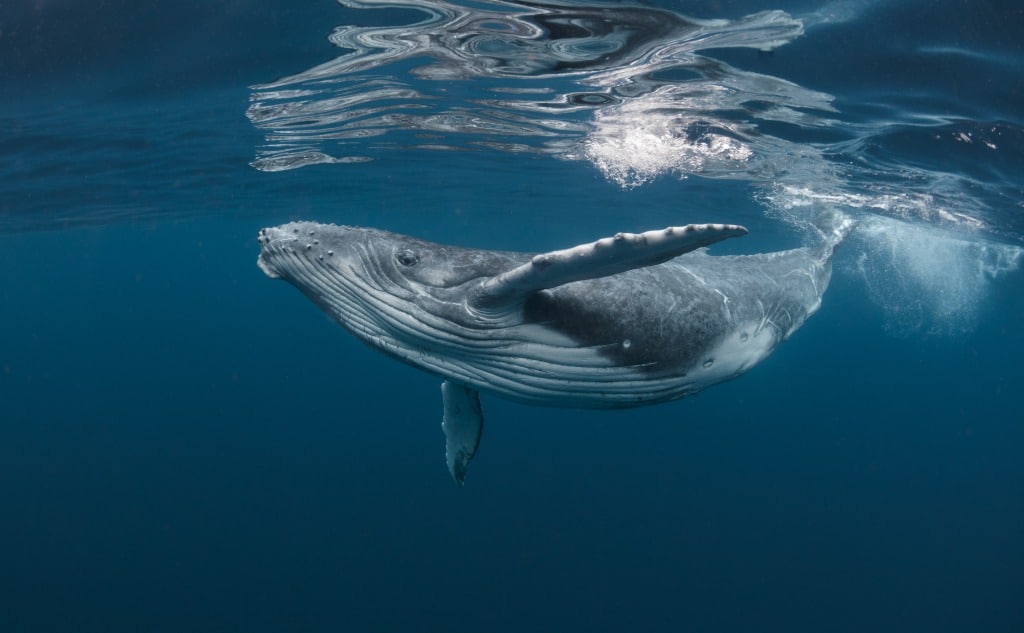 Here’s why sharks and whales are not in rivers anymore:

Some sharks and smaller whale species can be found in rivers, but the majority avoid them.

So if you want to learn all about sharks and whales and their connection to rivers, then this article is for you.

Why Are Sharks and Whales Not in Rivers Anymore?

The natural flow of rivers has been compromised by humans in many ways, often making them uninhabitable for animals that need clear water and lots of food. Although some sharks and smaller whale species can be found in rivers, the majority avoid them.

Large quantities of food are only available in oceans and seas, and sharks and whales need them to survive. Since they had no reason to go into freshwater over the centuries, their bodies adapted to the natural properties of saltwater only.

Not only do the seas contain enough food for these predators, but the water also has properties that help them with infected wounds after fights with other predators.

Whales and sharks try to stay away from the coastal sea and ocean waters due to pollution, aquatic constructions, boats, and fishing nets. Coastal waters are also the only places where they can get access to rivers.

Why Are the Coastal Waters a Bad Environment for Sharks and Whales?

A lot of physical pollution (garbage) and chemical pollution can be found in coastal freshwater and saltwater environments. The population of marine birds and fish are affected by this.

They either swallow the contaminants or get caught in them.

Animals are more likely to come across private and commercial boats in coastal waters. Animals are naturally frightened of human activities and tend to remain at safe distance.

Different types of structures around coastal environments can disrupt the normal functioning of sharks and whale pods. Dams and bridges cut off essential food supplies, so marine animals tend to stay in open waters where there is more food.

Many times, sharks and dolphins get caught up in fishing nets by accident. The animals are unaware of them and, once trapped, send signals to others of their kind to stay away.

What Whales Can Live in Freshwater?

The first type of whale that pops up in our minds when we mention these animals is probably the enormous blue whale. Along with 13 other large whale species, they form a group known as “Baleen whales.”

Baleen whales swim slowly and open their mouths to randomly get food and water inside. Afterward, they push the water out through baleen plates where the food gets trapped (filtered) and swallowed.

All Baleen species are unable to live in freshwater due to their size and the type of nutrition they need.

A group of whales smaller in size are the toothed whales, which count almost 70 different species. Few of them can be found in freshwater. The biggest representative is the sperm whale, which is almost the size of the baleen species.

While the feeding method of baleen whales is limited, the possibilities for toothed whales are vast.

These possibilities mean that they can find food in many different habitats, including freshwater. Some toothed whale species can be found in lakes and rivers.

At some point, though these environments are inadequate for them, they developed a few adaptations that made river trips possible.

Toothed whales with the ability to inhabit freshwater can only be found in Asia and South America. These species include:

The one freshwater whale species no one is sure still exists is the Chinese river dolphin. In 1997, the species had 13 individuals, and the last sighting of such an animal was back in 2018.

The endemic dolphin of the Yangtze River could be extinct as a result of electrofishing, habitat degradation, dam construction, and other human activity.

On the south of the Asian continent, the Indus and south Asian river dolphins all have one thing in common – eyes the size of a pinhead, which make it possible for them to see in their muddy environment.

All three species of South American freshwater whales (Amazon, Bolivian, and Araguaian) have long-toothed rostrums and are nearly blind. They inhabit several rivers in South America and get around using echolocation only.

The Amazon River dolphin is the most abundant of the dolphins and shares its habitat (Amazon and Orinoco Rivers) with the tucuxi. The tucuxi are classified as oceanic dolphins that occasionally go into freshwater.

First of all, the freshwater environment is too shallow for whales to live in. There is very little they can eat in that environment. Freshwater can also be easily polluted and become hazardous for whales.

Whales share the ocean with marine animals that can live in freshwater, but they need different circumstances to survive. Over the years, whales and their prey biologically adapted to the properties of saltwater only.

If a whale travels into a freshwater environment that’s naturally shallow, it risks getting stuck. Similar to when a whale gets trapped on a beach after the tide goes out, this is called “beaching.”

Has Anyone Seen a Baleen Whale in a River?

In 2020, three humpback whales, which belong to the group of baleen whales, have been spotted in the East Alligator River. The river belongs to the Kakadu National Park (Australia), and contrary to its name, it’s inhabited by crocodiles and not alligators.

This was the first time a humpback whale was seen in a river.

Before that, they had only been seen dwelling close to river mouths, but not in them. So, everyone is asking how and why did they end up in the river?

Scientists think that the whales just wanted to explore the area since they are extremely curious beings. Another theory is that they made a navigating error and headed for the river upstream instead of for the cold feeding waters of Antarctica.

Two of the whales swam 12.5 miles (20 kilometers) upstream before realizing the mistake and heading back to sea. The third one, however, remained in the river for 17 days. Once it finally entered the sea, the animal was a lot thinner than before.

Humpback whales are one of the largest animals on the planet.

They can grow up to 50 feet (16 meters) long and around 80000 pounds (36 tons). Seeing them in a river is pretty much like seeing a bus cruising inside the water.

The federal officials in Alaska reported that there were three killer whales (technically called “orca whales”) in a freshwater river in Alaska back in 2011. That’s quite a bold move for these saltwater mammals.

The NOAA (National Oceanic and Atmospheric Administration) said it was the first time they have seen orcas swimming in the freshwaters of Alaska.

Upstream, the group of killer whales swam 30 miles (48.2 kilometers) and stayed for about three weeks. Witnesses reported that the animals appeared to be quite stressed. Also, they were covered in membranes which can also be seen on other marine mammals that go into freshwater.

The membrane is probably an alteration in enzyme structure and function of the cells that make the animal adapt to different environments. When marine mammals go very deep in the water, these adaptation mechanisms also activate.

The probable reason for the orca going into freshwater is to pursue of food. These rivers are rich in silver salmon, and some of them are even inhabited by seals. Orcas have quite a sweet tooth for both of those snacks.

He entered the Sacramento River, passed under the Rio Vista Bridge, and came to a dead-end 69 miles (111 kilometers) away from the ocean. There were many different attempts to make Humphrey the humpback go back into the ocean but, unfortunately, all failed.

Initially, people played orca sounds to frighten Humphrey the humpback and make him leave. They also made sound nets by banging on steel pipes behind him. All efforts were fruitless, and the health of the whale was continuously worsening.

The scientists’ last resort was to play acoustic recordings of feeding and social sounds of whales. Large speakers were lowered on a boat, and the sounds were played. Finally, Humphrey the humpback went down the Sacramento River and eventually into the Ocean.

What Sharks Can Live in Freshwater?

Only a few shark species can live in fresh water environments like lakes and rivers. Freshwater sharks are the Speartooth shark, Ganges shark, Borneo River shark, and the deadly bull shark.

It’s very hard for sharks that evolved in seawater to transition to freshwater due to the freshwater’s lack of salt.

If they can’t retain the salt inside their bodies while going from saltwater to freshwater, the sharks’ body cells can rupture. This will cause bloating (filling the cells with water) and eventually death.

That’s the reason why most shark species specifically adapted to saltwater and why their bodies sink when introduced to freshwater environments. Those that can retain the salt and recycle it can live in both environments.

Also called the “glyphis,” the speartooth shark can be found in freshwater and saltwater in West Papua, Papua New Guinea, and northern parts of Australia. The species mostly resides on fast-flowing estuaries and tropical riverbeds.

They preserve energy while feeding on crustaceans and fish by using the tidal currents that carry the sharks upstream.

Adult species can grow up to 9.8 feet (3 meters) in length. Their heads are very wide, and they have 29 rows of teeth on both jaws. The spear-shaped teeth in the lower jaw are what made this shark’s name.

This critically endangered shark species dwells only in freshwater. They can be found in the Brahmaputra, Mahanadi, Ganga, and Hoogly Rivers in India.

With the particularly small eyes, they adapted to the poor visibility in the ecosystems Ganges sharks live in.

People often mistake them for bull sharks. But unlike their infamous lookalike, Ganges sharks rarely (if ever) attack people.

The bull shark is one of the most unique shark species in the world because it only has 50 percent salt concentration in the bloodstream and can survive in freshwater and saltwater.

What makes them dangerous is that they can reside in places where people often think there is no danger at all. Bull sharks can swim upriver for thousands of miles and are commonly present in lakes as well.

You can expect to see a Borneo River Shark in the Kinabatangan River in Sabah (Malaysian Borneo). They grow up to two feet (0.6 meters) long and can be found in saltwater environments as well.

What’s the Biggest Shark That Ended up in Freshwater?

It’s not just the biggest shark, but the biggest of all fish that was spotted in freshwater in 2019. Twenty-five miles (40 kilometers) upstream in Hey River, Queensland, Australia, is the place where the enormous whale shark was first noticed so far from the sea.

From time to time, Whale Sharks come close to riverbeds to feed, but it’s quite unusual to cross all that way upstream. Scientists and shark experts assume that the animal was lost or sick because it seemed disoriented and without proper guidance.

A week later, everyone lost track of the whale shark. Maybe it died or maybe it got back to sea. Whatever happened, it left people very puzzled.