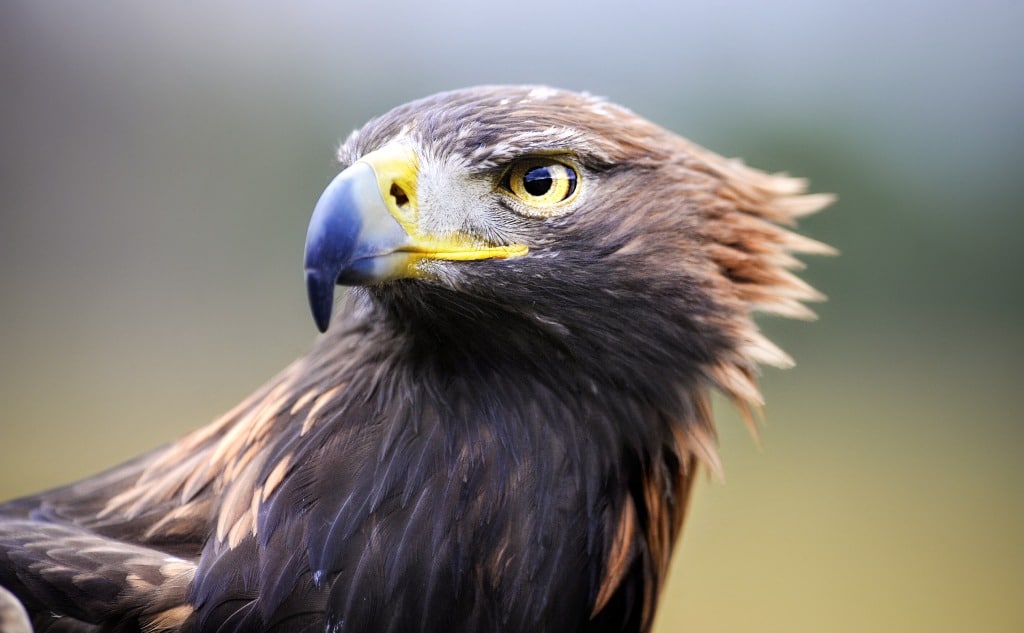 Here are the animals with the best eyesight:

Each animal has a type of vision that satisfies its natural requirements to survive. Eagles have the best eyesight among birds. The cheetah has the most evolved eyes of any mammal. Octopuses have the best vision of all marine life.

So if you want to learn all about the animals with the best eyesight, then this article is for you.

What Does Best Eyesight Mean?

Each animal has a type of vision that fulfills its natural requirements to survive; no more, no less.

Among birds, the eagles have the best eyesight.

Cheetahs are the mammals with the most evolved eyes in the animal kingdom.

In the seas, the octopus has the best vision of all marine life.

Naturally, human beings have eyesight. Our binocular vision makes it possible for us to concentrate both eyes on one object and create a three-dimensional image. So, not only do our eyes see the shapes of things, but they also perceive their depth.

Binocular vision is only possible if the eyes are on the front of the face and have a forward-facing orientation.

Cows, for example, have monocular vision because their eyes are on the sides of the faces. Thus, they are not able to see the depth in things and are blind in the area in front of their noses.

Although people can see clearly up to 3 miles (5 kilometers) away and distinguish colors from a distance, some animals have significantly better vision. Many animals can see many more colors than humans can.

The human eye doesn’t have night vision or underwater vision properties because our evolution didn’t require them.

Groups of animals use a different adaptation of the eyes to have excellent visuals at night and in the water according to their needs.

All changes in one’s body come at a price so that balance is maintained. If an animal doesn’t have very good eyesight, it probably has excellent hearing or scent that makes living in its environment possible.

Which Mammals Have the Best Eyesight?

The development of excellent vision in mammals is according to the animal’s lifestyle.

Mammals with the best eyesight according to different advantages include:

Being the fastest mammals on Earth, cheetahs need to have a vision that can spot prey precisely during their rapid movement. Their vision is binocular, and additional structures in the vestibular regions of their skulls help them hold a stiff head while running.

The tear lines on their faces absorb sunrays and keep them away from blinding the eyes. Of all their feline relatives, cheetahs have the most photoreceptors in the retina of the eye.

During the daytime they can spot a victim from 3 miles (5 km) away. On the other hand, their night vision is quite bad.

Snow is highly reflective, and, on the North Pole, nights can last for several months. That’s why the arctic reindeer has two visual adaptations. First, their tapetum lucidum changes its color to blue in winter and to gold in summer.

The function of the tapetum lucidum is to increase visual sensitivity at low light, but the change of color decreases that sensitivity. So, the eye of the reindeer is more sensitive to light during winter and less sensitive during summer.

Second, they have protective mechanisms that prevent direct reflection of ultraviolet lights from damaging the eyes.

Good amphibious vision means that these animals have high-quality vision both on land and underwater. That’s possible because the otters have special mechanisms for focusing.

Some of the muscles in the structure of their eyes can change the shapes of their corneas (the most outer layer of the eye). They adjust their cornea shapes for different behavior in air and water.

Although otters can perceive color, it’s only a limited number of variations.

Tarsiers are recognizable by their unconventionally large, round eyes. The shape and size aren’t just for cuteness. It’s a way for them to function well at night.

Bornean Tarsiers don’t have the tapetum lucidum layer that other nocturnal animals use to see in the dark. Instead, they simply have large eyes with a very high density of photoreceptors. The density is approximately 2–3 times bigger than humans.

If people had the same eyes-to-head size ratio as tarsiers, our eyes would be the size of very large grapefruits.

Many people find the eyes of goats intimidating. Indeed, their visual system is unique. Unlike other mammals, the shape of a goat’s pupils is rectangular and horizontal. Their retinas are triangular-shaped, as well.

The unusual shape gives goats a field of vision that can be between 320 and 340 degrees. While grazing, their eyes can rotate to make sure there is no danger lurking in their surroundings.

An enhanced panoramic view comes at a price, however. Goats completely lack depth of vision. Also, because of the limited number and types of cones in their eyes, they can only see a few colors like green, yellow, orange, blue, and violet.

Which Birds Have the Best Eyesight?

Most birds can see quite well, but raptors (birds of prey) have the most enhanced vision.

Birds with the best eyesight are:

The phrase “eagle eye” didn’t come from nowhere. According to scientists, the acuity (sharpness) of eagle vision is eight times higher than humans. Bald eagles can track fish movements from incredible heights, despite the fish being concealed by water.

Eyes take most of the space inside the eagle’s skull. They can switch from a monocular to binocular vision and vise versa. Eagles can look in two different directions simultaneously.

On the back of the eye, the density of nerve cells in the part of the eye called the retina is very high. In addition to the standard colors that we humans see, eagles can also see the colors in the ultraviolet light spectrum.

Flying eagles can keep their heads immobile for long periods, a feat which helps them concentrate on an object to form a sharper image of it.

Just like other raptors, Harris hawks have very acute vision.

They have photoreceptors (cells that register light) to detect the color violet as well as short, middle, and long light waves. Although this hawk’s eyes are small, it doesn’t change its ability to distinguish objects according to color.

These effective predators need quality night vision because they are predominantly nocturnal. Their eyes are large and have binocular vision.

Tawny owls can see 100 times sharper than humans in the dark and can spot prey 0.3 miles (0.5 kilometer) away.

Some believe these birds can differentiate between green and blue and green and red. Due to the large pupils, their night-seeing sensitivity is 2.2 times more important than it is for humans.

The American woodcock feeds on land and is very vulnerable to potential predators. Those are the primary reasons why this bird developed a broad panoramic view. They need it to detect and escape danger.

A woodcock’s large eyes have relatively high positioning on the head, making panoramic vision possible. They have the largest visual field of all birds and can see 180° vertically and 350° horizontally.

European robins see the world in color. Besides the usual rods and cones (common cells in the eyes), they also have cryptochrome and flavin adenine nucleotide segments in their eyes. These cells enable the birds to visualize magnetic fields.

They also have a region in their brain specialized for processing visual information. Only birds that migrate at night can visualize magnetic fields.

That’s why differentiating colors is essential for their survival. They can see many colors outside the usual spectrum.

Which Aquatic Animals Have the Best Vision?

Animals living in water have larger and more-spherical lenses than do terrestrial vertebrates. Also, the difference in density between the cornea of aquatic animals and the density of water is minimal. That similarity means that their eyes can focus effectively even submerged.

Aquatic animals with the best vision are:

Octopi have some of the most complex eye structures in the entire animal kingdom.

Their pupils are mobile and can grow large or become small. Octopus eyes have one chamber with spherical lenses.

The organization of the octopus’s retina, as well as the large visual fields of each eye, make it possible for the animal to direct its gaze in all directions at once. Because of this, they don’t have blind spots.

Octopus eyes are as sharp-eyed as cats. Even though octopi are colorblind they can visualize polarized light and distinguish changes in color.

The size of a giant squid’s eye can be the same as an adult human’s entire head. The eyes aren’t designed to detect objects with accuracy but instead to differentiate shapes in an environment that lacks much light.

One theory suggests that the eyes of giant squids are specifically developed to detect their main predators, sperm whales. A giant squid can see the shadow of a sperm whale at a distance of 394 feet (120 meters).

Can you believe that a shrimp has the best color vision in the animal kingdom? The eyes of mantis shrimp work similarly to video cameras or satellites. Such complex structures provide multiple color vision channels, with the ability to see ultraviolet and polarized light.

Besides the eye complexity, the mantis shrimp also has a unique nerve structure (called the “reniform body”) that allows them to process such vast visual information.

Regardless of what the name suggests, they only have two eyes. The pupil is divided so it appears as if they have four eyes instead of just two. Each pupil part has a separate cornea, as well.

The upper and lower parts of a single eye have different photoreceptors. The upper part is adapted to visualize the environment above the water, and the lower part can see inside the water.

Do you know what an archerfish is? The name suggests this fish is something that shoots arrows, and that’s actually not too far from the truth.

Archerfish shoot prey with streams of water. They need very advanced and complex vision capabilities to hit their targets.

They track and shoot-down prey outside of the water. Their eyes need to parse out the details of the world above them while also tracking moving prey.

Different types of photoreceptors, each with different sensitivity, allow the archerfish to recognize objects in multiple different environments.

Jellyfish have six eyes, and each of them is just a hole with a pigment.

What Animal Has the Most Unusual Eyes?

The answer is probably the chameleon. The shape of the chameleon’s eye is unique. It has no lower or upper eyelid. Instead, there is one cone-shaped eyelid per each eye.

Without moving its head, a chameleon can look in more than one direction at a time. A chameleon’s eye has a full range of motion and can move back, forward, down, and up, regardless of the position of the other eye.

While this animal usually uses monocular vision, once it spots a prey it turns the head towards it and changes the eye posture to create binocular vision. Chameleons need a binocular vision for depth and accuracy when shooting out their tongues to catch an insect.