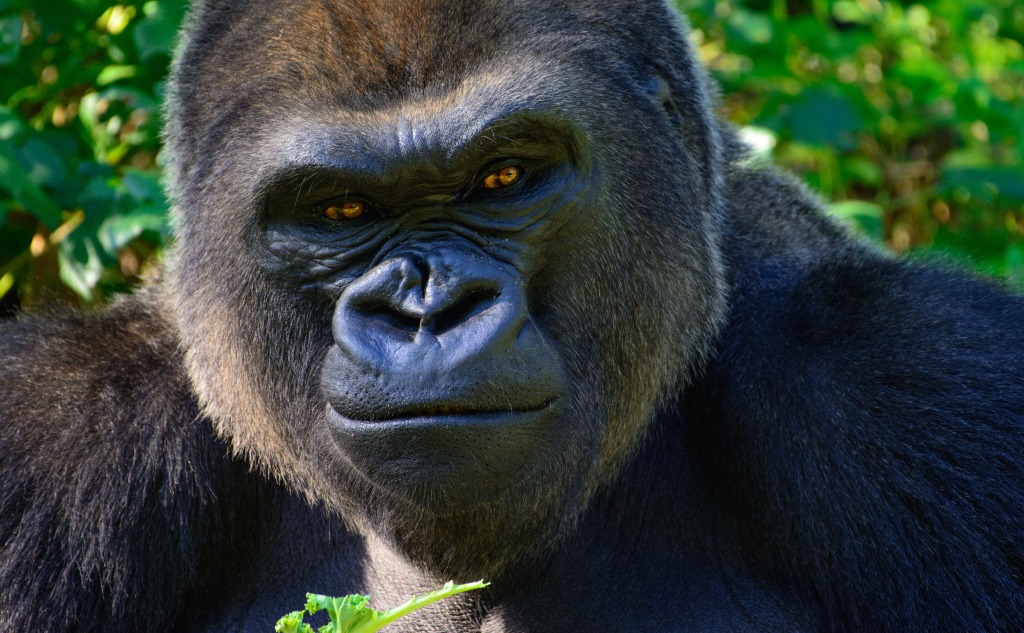 Here’s who wins in a fight between a gorilla and a lion:

Although the odds are in the gorilla’s favor due to its intelligence and strength, you can’t dismiss the king of the jungle just yet.

In dense forests, gorillas have an obvious advantage, while lions have an advantage in open fields like savannahs.

So if you want to learn all about who wins in a fight between a gorilla and a lion, then you’re in the right place.

Who Wins in a Fight Between a Gorilla and a Lion?

Both gorillas and lions are very strong and very dangerous, yet only one can win.

Who is the better fighter of these two African wild beasts? The odds are in the favor of the gorilla because of its intelligence and strength, but you can’t write the king of the jungle off just yet.

The gorilla has an obvious advantage in a dense forest, while lions have an advantage in open fields such as the savannahs they call home. It’s impossible for a group of lions to strategically attack in a forest, and a lion is vulnerable when fighting alone. In this scenario, the gorilla is the obvious winner.

On the other hand, large male gorillas are sometimes taken down by leopards. Leopards are more agile than lions, but probably not stronger. So, if a leopard can kill a gorilla, a lion can, too.

How Can a Lion Kill a Gorilla?

The lion just needs to use its stealth. If it comes close enough and scores an accurate bite, the fight will probably end before it even begins.

However, if a gorilla notices the predator, it will start throwing objects and punches while making use of its enormous endurance to come out victorious.

In this fight, the gorilla’s biggest disadvantage is that the whole thing goes completely against its nature.

A silverback gorilla (the name for adult males) is not a predator. His strength is just for show.

Another problem might be that, when he gets in trouble, he depends solely on himself. The other silverbacks likely won’t fight with him, as lions do in pride.

The pairing of these two tough individuals doesn’t have an obvious outcome, unlike other animal rivalries. Both gorillas and lions have their fair share of strengths and advantages that are unique to their species.

Power of the Limbs

Lions have short legs and strong claws. They use them to inflict both blunt and cutting blows.

Gorillas have very strong and long arms. Even though they don’t have claws, they use their hands to craft rocks and trees as weapons.

Who Has a Greater Bite Force?

The large canine teeth in gorillas are not designed to rip off flesh but instead to intimidate potential opponents. Their teeth can reach 2 inches (5 centimeters) long.

Comparatively, a lion’s canine teeth are twice the length of the gorilla’s. They are also used for tearing flesh. Lions have a bite force of around 650 pounds per square inch.

Surprisingly enough, gorillas can bite with an incredible 1300 pounds per square inch of force. Their strong jaw muscles and massive necks make the production of such a bite force possible. However, gorillas are more likely to use their limbs and body weight in fights, rather than their mouths.

Do Gorillas and Lions Cross Paths in Nature?

Lions and gorillas inhabit some of the same general areas of the world, but their habitats are much too different for them to cross paths. Gorillas live deep in the jungles and never leave them.

All the subspecies of African lions are separated by large territorial expanses that don’t have any lions living in them. While in the past the vast majority of the African continent had lions roaming free, their current range is restricted to small, widely dispersed areas in southern and central Africa.

There were times when lions could be found from India to Greece, but humans decimated these populations step by step over the centuries.

Only the Gir Forest National Park in India still serves as a sanctuary for a small population of Asiatic lions.

Lion prides live on savannahs and grasslands that are close to rivers and other freshwater sources. They fight and hunt in open areas, and it’s harder for them to get around in densely packed woods. That’s why they don’t reside in forest habitats within their range.

Eastern gorillas have the eastern part of the Democratic Republic of Congo as their natural habitat. There are lowland and mountain eastern gorillas. Mountain gorillas live at elevations between 8000 and 13000 feet (2.4 to 4 kilometers).

Are Lions or Gorillas Bigger Threats to Humans?

Approximately 200 people die each year as a result of lion attacks. Lions are a bigger threat to humans than gorillas are because they attack to kill, not merely to defend themselves.

Gorillas can be dangerous to humans only when they feel threatened and need to protect their troops. They would like to avoid attacking you as much as possible and would make a lot of noises at first to scare you away.

There are no known cases of humans being killed by captive or wild gorillas to date.

Lions can reach a maximum speed of 50 miles per hour (80 kilometers per hour). Due to lack of stamina, they can hold it only for a short time.

What Are the Lion’s Biological Characteristics?

Most people consider the king of the jungle to be a symbol of immersing strength and power. After the tiger, the African lion is the second-largest feline on the planet.

Lions differ from most other felines in their unusual social behavior, which they express through living in groups called prides. Lions are also the only cats with sexual dimorphism, which means that the males look markedly different from the females.

A mane is the most distinctive feature in male lions. A mane is a thick layer of hair that can be brown, black, or rust, extending from the neck to the chest. There are also dark tail tuffs (dense hairy endings) only in male lions.

Lions can be very fast when there is a need for that. While chasing its prey, the lion can run the length of a football field in just six seconds. The horizontal streak of nerve cells inside their eyes makes it possible to fix their gaze on prey from very far away.

Lions are carnivores, meaning their diet mostly consists of meat. In the wild, they usually hunt zebras, wildebeest, gazelles, buffalo, and giraffes. Sometimes they can also take down young rhinos, hippopotamuses, and even elephants.

They are opportunistic feeders, which means that whatever comes their way and seems edible can become their meal. When there is nothing better, you can see lions feeding on birds, rodents, reptiles, and hares.

Lions are nocturnal, meaning they are most active during the night and spend most of their time resting. Males can spend 20 hours a day resting. During rest time, they engage in social bonding and play and cuddle with each other.

The grouping is also a great advantage when it comes to hunting for food together. Females have certain hunting tactics. Lionesses surround potential victims and attack them from all directions.

Despite their power, strategies, and speed, they are more likely to fail in an attack than to kill. It often takes multiple tries for a pride of lions to finally catch their prey.

What Are the Gorilla’s Biological Characteristics?

“Silverback” doesn’t refer to a special gorilla species but rather to older male individuals of any gorilla species. They get their silver saddle when they are 12 years of age. Any younger male that still hasn’t gotten his silver saddle is called a “blackback” gorilla.

Gorillas have very small ears. On the top-rear of their skulls, the males have large bony crests. These crests aid in supporting the teeth and the muscles on the jaws and have a direct impact on the bite force.

Although the females also have crests, they are not as pronounced and so do not give their heads a conical shape. Silverbacks have long, thick coats that insulate them when residing at high elevations.

You can say that, according to their body weight, African lions and gorillas are more or less the same.  However, their behavior and their ways of life are completely different.

Gorillas have a predominantly vegetarian diet. They consume any insect or small animal that might be on the leaves and stems they eat. You can find them chewing on rotting wood and crops as well.

Sustaining a body as large as they have requires that a lot of food be consumed every day to satisfy nutritional needs. Silverbacks can consume as much as 45 pounds (20 kilograms) of food daily.

The gorillas are very social and live in groups known as “troops.” A dominant silverback leads and protects each troop. This cohesive family can also have one or two younger males, three to four mature females, and three to six infant gorillas.

A leading silverback can sometimes have a subordinate silverback as the king’s right hand. The subordinate is usually the dominant male’s younger brother or adult son.

Comparison of Lion and Gorilla Attributes