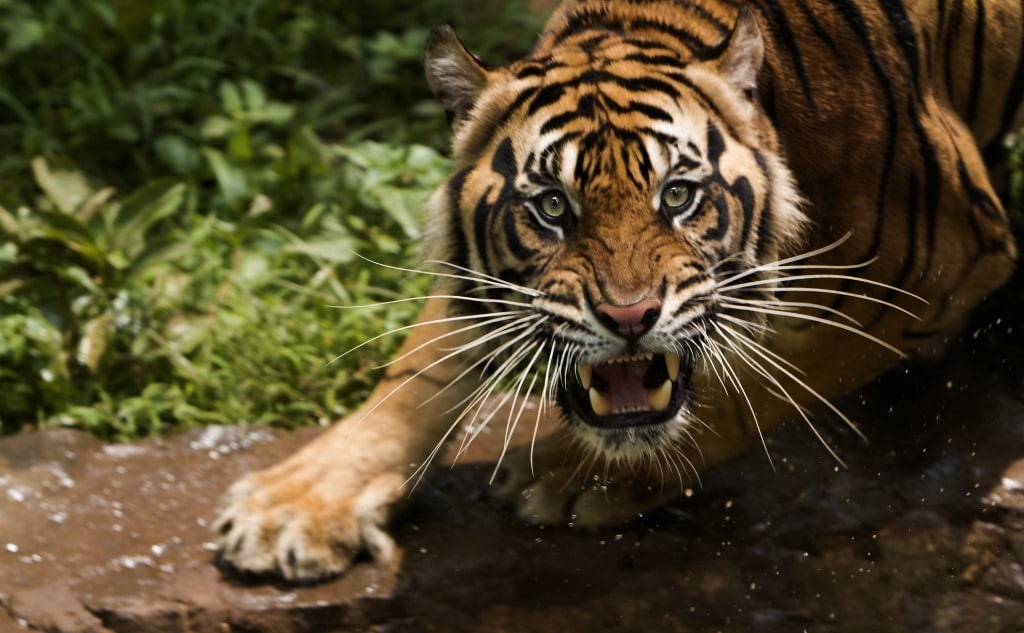 Here’s whether a human can survive a fight with a tiger:

Once the animal starts engaging, you are pretty much toast.

So if you want to learn all about whether and how a human can survive a fight with a tiger, then this article is for you.

Can a Human Survive a Fight With a Tiger?

Once the animal decides to engage, you are about as good as dead.

Weapons and tools provide about the only real chance for a human to survive a tiger attack. Hand-to-hand combat is very unlikely to go well for a person.

Firearms will scare off a tiger with the noise alone. Pepper spray can also do the trick if you start spraying while the tiger is at a good distance.

Firecrackers might come in handy. Lighting a few of them makes tigers flee the spot because it sounds like a gun battle is on.

Never think of a sick, injured, very old, or very young tiger as something less dangerous than an adult, healthy one.

All tigers are fierce killers. Disabled tigers may have less ability to hunt big animals, but humans are still a little match for them in direct combat.

How Many People Have Been Killed by Tigers?

Around 373,000 people have been killed by tigers between the years 1800 and 2009. Most of the attacks happened in Southeast Asia, Nepal, and India.

An average of 1,700 people are killed by tigers every year.

How to Survive a Tiger Attack?

Your best chance of surviving a tiger attack is spotting the predator before it spots you. In any case, you need to stay motionless and quiet.

Any movement will alert the animal and turn its predatory attention to you.

The worst thing you can do is panic. How can one avoid panicking when threatened by a tiger attack, you ask? Well, not easily, that’s for sure.

However, staying calm will increase your odds of survival. Inhaling deeply and closing your eyes for a second might help you lower your anxiety, even for a little bit.

Panic tends to make people engage in a fight or flight response. Either of those reactions will encourage the tiger to attack you.

Once you’ve taken that moment to calm yourself, start backing away slowly without making eye contact. Don’t turn away or show your back to a tiger. You only make yourself a more appealing target that way.

You can start running in the opposite direction as soon as the animal is out of your sight. Until then, keep facing it.

Avoiding a Tiger Attack With Another Person

If a parent were to see their child attacked by a tiger, their first instinct would be to step in front of their son or daughter and shield them with their own body. That instinct might not be the best solution, unfortunately.

Experts think that putting your child on your shoulders might make you look more intimidating to the tiger by making you look bigger.

The same rule applies if you are with another adult and if either can hold the other one on their shoulders.

Any action that makes you look bigger is beneficial in this situation. Stand tall, puff yourself up, and hope the tiger perceives you as a large threat.

Doing the opposite, such as crouching or sitting, will encourage the wild cat to come running in your direction.

A natural (albeit embarrassing) response in a situation of extreme fear or happiness is for a person to pee his or her pants. When you are near a wild tiger, however, you must do everything in your power to hold your urine in your bladder.

Tigers are very attracted to the smell of urine.

They also might think you are trying to mark your territory and perceive the urinating as an act of aggression. In this case, a simple pee is a thing that can get you killed.

Nowadays there are more tigers in captivity than there are tigers living in the wild. Despite what you might see on social media and TV, tigers can never become reliable pets.

That’s why you should always keep your distance from tigers. Don’t try to pet them. Simply enjoy their beauty with your eyes only.

If there is no chance of remaining hidden, and the tiger looks ready to attack you, then you need to fight back.

Lying on the ground and playing dead won’t work with this particular animal. It will only make you an easy meal.

If the tiger caught you in its grips, try to stick your hand in its mouth to trigger a gagging reflex. This reflex stops the animal from biting.

The good news is that tigers are more afraid of humans than they are of just about anything else, including lions. Chances are that you won’t need to use your hand in that manner.

Can I Escape From a Tiger if I Jump in the Water?

Even though it’s a popular belief that all cats fear water, tigers are excellent swimmers that willingly go into the water to cool themselves off.

Jumping into the water to save yourself from a tiger won’t do you much good.

What would happen if you did jump into water? Well, first of all, the tiger will jump towards you and practically crush you beneath its weight. They can jump at distances of over 33 feet (10 meters).

Even if you went far, the tiger can cross as much as 18 miles (29 kilometers) of water and catch you.

If you go deep below the surface and wait until the tiger loses interest, there is a tiny possibility to escape. However, you can never know whether the tiger will be waiting for you once you get back up.

Should You Climb a Tree When a Tiger Spots You?

The difference between other wild cats and tigers is the fact that tigers cannot climb trees. When they are younger they may attempt to get higher, but as they age they become very clumsy when aloft.

That means that you might have a chance of getting out of a tiger attack alive if you climb a tree high enough. Hopefully you aren’t afraid of heights!

Where Are Tigers Most Afraid Of?

The people living in the vast river delta of the Bay of Bengal known as Sundarbans are the ones most familiar with tiger attacks.

Even the mention of the word sends the villagers into a state of deathly fear. There’s hardly a person living there whose life hasn’t been touched by a tiger.

In the Sundarbans, approximately 60 people are attacked by tigers each year. Half of the cases end up with the person being killed.

A local legend is a person named Jamal Mohumad who survived not just one but three tiger attacks.

The first attack happened back in 1997 when Jamal went into the forest to fish and hunt. The tiger dug its claws into Jamal’s legs and dragged him under the water.

Once in the water, Mohumad dived down 10 feet (3 meters), and that’s when the tiger released him. He continued to swim deep underwater, and when he got out the animal wasn’t there anymore. A nearby boat came to his rescue.

The third incident occurred in 2007 when Jamal noticed a tiger stalking him from the high grass. He remained calm and faced the tiger, which came as close as 3 feet (1 meter).

When the animal started roaring and releasing other intimidating sounds, Jamal also tried to roar as loud as he could.

This went for hours, and the tiger didn’t dare to attack because he thought that the opponent wasn’t afraid of him. After an hour, the villagers heard the noises and came rushing in to save their friend.

Physical Characteristics of Tigers and Humans

With only one precise swipe, a tiger can behead a human.

Even if you try to run away, your chances are slim because tigers can reach speeds of 40 miles per hour (62 kilometers per hour).

The fastest human ever achieved a record speed of 23.1 miles per hour (37.2 kilometers per hour), which is almost half of the tiger’s average speed.

This is definitely not an accurate comparison. Even when they are raised in captivity by people familiar to them, tigers can still decide to attack their owners.

A tiger’s paw is absurdly strong. It takes only one swipe from the tiger to break a bear’s skull or even spine. Their claws can be 3 inches (7.5 centimeters) long.

Remember that it’s not only humans that are at a disadvantage in tiger attacks.

Nearly every terrestrial animal is in the same position. An incident that happened back in 2011 when a tiger killed a lion with just one swipe should provide sufficient evidence of the deadly potential of a tiger attack.

Why Would a Tiger Attack a Human?

Humans are not the desired source of food for tigers. Only tigers that are severely injured, old, or possessing missing teeth have any real likelihood to turn to human flesh as a meal.

It’s desperation that drives them to become man-eaters.

Other reasons to attack humans are situations where mother tigers are protecting their cubs or when they feel that people are invading their territory. There are also cases of “mistaken identity” when people that are crouching down or riding bicycles appear to be some animal that the tiger usually hunts.