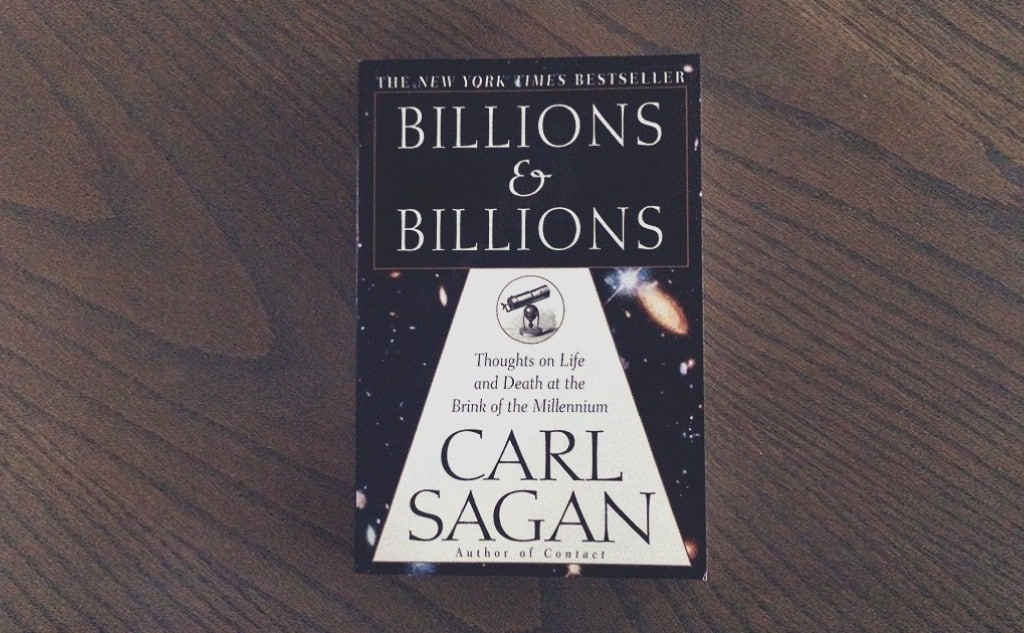 This is a review of the book Billions and Billions: Thoughts on Life and Death at the Brink of the Millennium by Carl Sagan.

The final book of a modern-day astronomy legend.

“Billions and Billions: Thoughts on Life and Death at the Brink of the Millennium” by Carl Sagan

Billions & Billions: Thoughts on Life and Death at the Brink of the Millennium was the final book of Sagan’s sensational career and life.

In light of this and the soon-to-be new millennium, he broaches some of the most enigmatic and sensitive questions regarding our universe.

In typical Sagan fashion, the early sections explore the vastness of mathematics, the cosmos, and beyond in an almost poetic essay format.

Whereas, later sections tackle our potential future fates and how mankind should- and has been approaching such dilemmas.

Sagan dissects politics, global warming, and more in a philosophical plea, imploring us to course-correct our own cosmic destiny.

No doubt, Carl Sagan goes down as one of the great modern wordsmiths. His phrasing, stunning word choices, and sensitivity breathed a gentle Robert-Frost-like charisma into science.

But, Billions and Billions took these qualities to new heights. In fact, from page one, aware of his own time running out, Sagan goes into touching retrospect on his life and career.

Brilliantly, the book begins by revealing his lack of ever using the phrase that would be forever associated with him, “billions and billions.”

Instead, the phrase spawned from Johnny Carson’s playful impersonations of Sagan in his dozens of late-night guest appearances.

Sagan’s emotional entrance gives even first-time Sagan readers a sad yet comforting feeling that they have known him personally their entire lives.

In fact, for lack of a better term, the opening chapter almost serves as a science-riddled deathbed speech.

A Refreshing Look at Global Warming

Today, climate change is everywhere. However, somewhere along the way, it became more of a political and social device than mere scientific concern.

Too often, notable personalities use global warming as a scare tactic and blaming tool. Whereas Sagan reveals his deep outlook on the subject in a genuine plea.

Actually, it almost feels as though it was a speech originally intended for a congressional hearing.

Sagan paints beautiful yet frightening word pictures of how global warming and ozone depletion happen, both by mankind and natural universal forces.

Then, There Was Politics

Suddenly, Billions and Billions takes a jagged turn for the later sections.

Indeed, pivoting 180 degrees from his aforementioned views on climate change (see above), Sagan’s outlook turns into a rather grim, divisive political rant.

In fact, it almost felt as though he suddenly dug up previous frustrations, laying them out boldly on the table one final time.

Personally, politics and finger-pointing have found their way into climate change far too often. While most of us do have one opinion or another on these matters, I found its blatant use a bit below Carl’s typical premium standard of writing.

Above all, his fierce blame of modern-day problems on previous decades, political figures, and companies was all but unnecessary.

Overall, the jarring contrast between the poetic beginning and bitter end impeded Billions and Billions. But, ultimately, it felt that taking such a turn was the very thing that prevented this final work from being Sagan’s masterpiece.

Political ranting aside, Billions and Billions remains a book worthy of any astronomical bookshelf.

While I would strongly promote previous Sagan works over Billions and Billions, it still holds droves of worthwhile reading.

After all, it is the final work of a man who practically built mainstream astronomy.

What can we say about Carl Sagan that has not already been said?

The man impacted science from general astronomy all the way through astrobiology and spaceflight.

Particularly, Sagan was the most well-known scientist throughout the 1970s and 1980s.

Certainly, he paved the way for future popular astronomers like Bill Nye and Neil Degrasse Tyson.