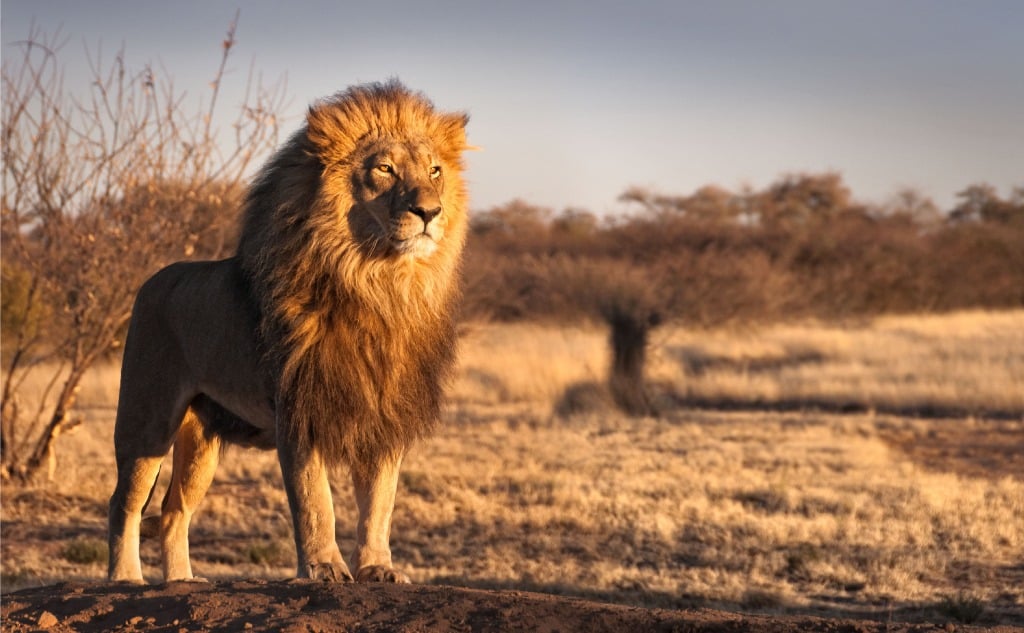 This is whether lions eat hyenas.

So if you want to know all the details about why and when lions eat hyenas, then this article is for you.

The bottom line is that lions can eat hyenas, but they usually don’t.

But, when the food supply is short, and the lions are starving, they might be desperate enough to attack hyenas to eat them.

Most of the time, lions attack to scare or eliminate the competition to maintain their control over their kingdom and their status as King of the Jungle.

Let’s jump into the details:

Consider this: What if there are two kings in the jungle at the same time?

When there are enough resources to feed and shelter all carnivores (predators), no one fights each other.

But when the food is scarce and supplies run down, that leads to increased competition.

There is an innate tendency in every animal to strive to live and reproduce, no matter what it costs.

What this means is two key predators will fight each other if necessary to ensure their kind wins.

Does this hold for lions and hyenas?

These two old rivals have always been in intense competition, so much so that each tries to diminish the other’s population, including the young ones.

Of course, lions have some advantage over hyenas because of their strength, firm bodies, and strong jaws.

Still, hyenas, despite short hind legs and less elasticity, depend more on teamwork and intelligence.

Lions are exclusively predators. While hyenas, such as brown hyenas and striped hyenas, are scavengers feeding upon insects, bones, skins, and whatever remains after other predators have had their fill of the kill.

However, spotted hyenas are the exception. They are the most prominent hunters in the family Hyaenaidae. Because of this, they became chief competitors to lions. They offer them a great tough time.

Lions vs. Hyenas: How Do They Compare?

Here’s a comparison between lions and hyenas:

With the ability to break the skull in between its paws, the lion depends most on its power and strength. They usually kill their prey by a strong bite on the throat, which strangles its prey.

Sometimes they may kill their prey by enclosing its mouth and nostrils between their jaws, stopping its breathing.

On the other hand, hyenas have less body strength compared to lions. They have short hind legs, which limits jumping, but helps them to run for long distances.

They also have limited mobility of their vertebral column. Their jaws are strong enough to kill other animals in a single bite and crush the strongest bones.

Yet, their jaw strength is not comparable to lions.

Lions have small hearts and lungs. Their heart is only 0.45% of their body size. They are not efficient runners, and their speed and stamina impede their hunting efforts.

They cope with this hurdle by slowly sneaking near to their prey and often use camouflage tactics.

On the other hand, the hyenas have a bigger heart of 1% of their body size and often run down their prey by chasing it for long distances.

When it comes to intelligence, Hyenas are smarter than lions. They know how to take advantage of their numbers, when to attack, and when not to attack.

They have a good pack-hunting methodology and communicate with each other well during a hunt.

The dominant species in any fight between lions and hyenas are largely determined by the number and male lions present. Hyenas avoid male lions at all costs.

In group strength, both lions and hyenas vary from time to time. Two male lions together are considered enough against a group of 20 hyenas.

Among the different hyenas, spotted hyenas are the most sociable and run in the largest groups.

That is why they are the most adapted and successful type of hyenas on the planet.

On the other hand, the striped and brown hyenas are not successful predators and mostly live as scavengers eating insects and leftovers.

Hyenas have an additional weapon for defense when compared to lions.

Moreover, spotted hyenas are also called laughing hyenas. Their bark sounds like they are mocking and laughing at the lions during a fight.

So do lions eat hyenas?

Of course, they can. There is no doubt that lions can eat hyenas.

Lions are cats that eat an exclusively carnivorous diet. Their digestive system is specialized to digest meat, bones, skin, and even hooves of animals. Lions ingest a large amount of meat and efficiently digest it.

But, Do Lions Eat Hyenas, Too?

Not usually. In fact, lions usually don’t eat hyenas because they have alternative food sources. Their normal prey species, usually herbivores, are easy to catch, are delicious, and offer very little or no resistance.

When such food is available with ease, why eat hyenas? Who will put up a fight?

Research studies show that while it has been observed that lions kill hyenas, they usually don’t eat them.

In another study, lions left an injured hyena to die rather than kill it.

Here are some speculative explanations:

Why Lions attack and kill hyenas if they don’t have to eat them?

The answer is that the fight between a lion and a hyena is not to eat each other but establish or maintain their status.

Let’s explore this some more.

The Fight for Power Between Lions and Hyenas

It’s all about the fight for power:

Fight for the Same Status and Position

The lion is the top carnivore and apex predator occupying the highest place in a food chain.

The food chain is a series of living organisms in which one organism feeds on the one before it and is fed by the one after it.

Lions are not preyed upon by anyone and enjoy the status of “the jungle’s king.” They have a great direct or indirect impact on the other species and play a key role in the stability of the ecosystem.

Suppose there are no lions in the jungle. In that case, the jungle’s ecosystem collapses because the check on other predators by lions will cease.

On the other hand, hyenas most often challenge the lion’s status as king. They sometimes steal their food, attack their cubs, mock and laugh at lions entering their territory, and sometimes pull a lion away from its food. These efforts by hyenas to challenge lions often happen at night when they are more active.

Fight for the Same Food

Lions kill not only ungulates (animals that walk on hooves) such as wildebeests, zebras, buffaloes, deer, and giraffe, but other carnivores, too.

All these species are also preyed upon by hyenas. So there exists a strong competition for food resulting in fights between these two rivals, proving deadly.

Both lions and hyenas mark their territory and protect it.

Lions do it by urinating and defecating.

When entering each other’s territory, the violent streak of both species gets activated, and both of them fight till death or defeat.

There have been studies that show that male lions fight hyenas for revenge.

Lions killed hyenas because they had attacked a lioness or cubs.

To end the competition before it starts, both lions and hyenas engage in the genocide of each other. They attack and kill each other’s young ones to avoid competition in the future.